Ravens won with their legs -- Tucker's and Jackson's 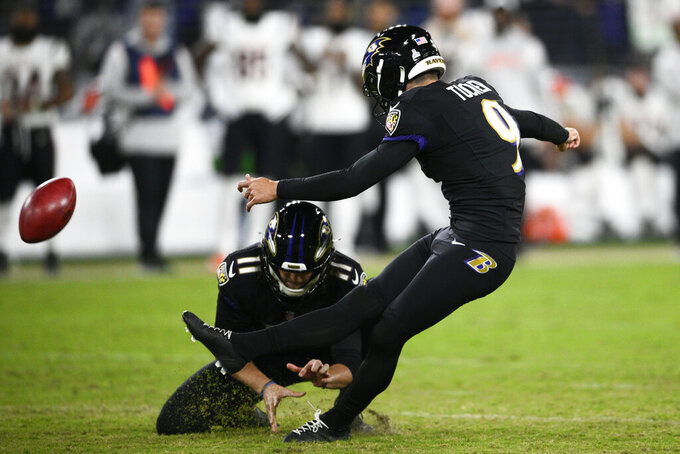 Baltimore Ravens' Justin Tucker kicks a field goal during the second half of an NFL football game against the Cincinnati Bengals, Sunday, Oct. 9, 2022, in Baltimore. (AP Photo/Nick Wass)

In the third quarter, Baltimore coach John Harbaugh sent Tucker out to try a 58-yard field goal, even though a miss would have given Cincinnati the ball near midfield.

“That was a tough one, because normally you’re playing good defense, and your thought is going to be to pin them down in there and keep them down in there,” Harbaugh said. “That was not an easy choice, but in the end, the scale tipped towards Justin.”

Tucker made that attempt as well. In fact, the star kicker accounted for all of the Ravens' second-half scoring in their 19-17 victory over Cincinnati on Sunday night. He calmly connected from 43 yards on the game's final play to put Baltimore in sole possession of first place in the AFC North — and spare the Ravens another close loss at home.

Baltimore (3-2) had blown leads of 21 and 17 points in losing its first two home games. The Ravens allowed a 10-0 advantage to slip away before halftime against the Bengals, but an inspired defensive performance and the legs of both Tucker and quarterback Lamar Jackson were enough to earn a win.

Jackson ran for 58 yards on 12 carries. The dual-threat quarterback had a 19-yard run on the winning drive to move the Ravens into field goal range.

Tucker could probably go in this category every week, but games like Sunday are why the Ravens shouldn't take him for granted. He makes long kicks and clutch kicks, and when Baltimore had the ball down one with under two minutes remaining, all Jackson needed to do was drive them about 30 yards for the Ravens to have a chance.

Instead, Baltimore traveled 50 yards to the Cincinnati 25 to set up Tucker, who has now made 61 consecutive field-goal attempts in the fourth quarter and overtime.

The Ravens still haven't played a full 60 minutes at the level you'd expect from a Super Bowl contender, and the offense has fizzled in the second half of the past two games. Baltimore didn't score at all after halftime in a 23-20 loss to Buffalo two weekends ago, and the Ravens were limited to Tucker's three field goals in the second half Sunday.

In fairness, Baltimore put together some long drives in the second half of those games, but they didn't result in touchdowns. On the season, the Ravens have outscored opponents 34-3 in the first quarter but have been outscored 50-15 in the fourth.

After allowing 41 points in each of last season's two losses to Cincinnati, the Ravens more than held their own against Joe Burrow and Ja'Marr Chase this time around. Baltimore's defense has taken a step forward since yielding 28 fourth-quarter points in a 42-38 loss to Miami in Week 2.

“They’ve been getting a lot of noise about how they’ve been playing,” Jackson said. “In our eyes, they played lights out.”

The Ravens looked particularly well-prepared when defending their own goal line in the third quarter. The Bengals lost 12 yards on a trick play, then Burrow threw incomplete on a shovel pass on fourth-and-goal from the 2.

“We work on the shovel pass a lot. It's a play that we run too,” Harbaugh said. “It's one that's pretty defined — the techniques, we recognize the blocking scheme involved there. I just think our guys did a great job.”

It wasn't a great game for the Baltimore passing game. Jackson missed some open receivers downfield, and there were occasional protection issues. Tackle Ronnie Stanley was playing in his first game since last season's opener. He played 22 offensive snaps.

The Ravens were without receiver Rashod Bateman (foot). Jackson threw for 174 yards with a touchdown and an interception.

Harbaugh said S Marcus Williams (dislocated wrist) would go on injured reserve, but he said he did not expect the injury to be season-ending. ... Harbaugh said Bateman and LB Justin Houston (groin) might return next weekend.

17 — The number of field goals Tucker has made in the final minute of regulation in his career. He's never missed one.