Redskins enjoy 2nd win, need better with Panthers up next 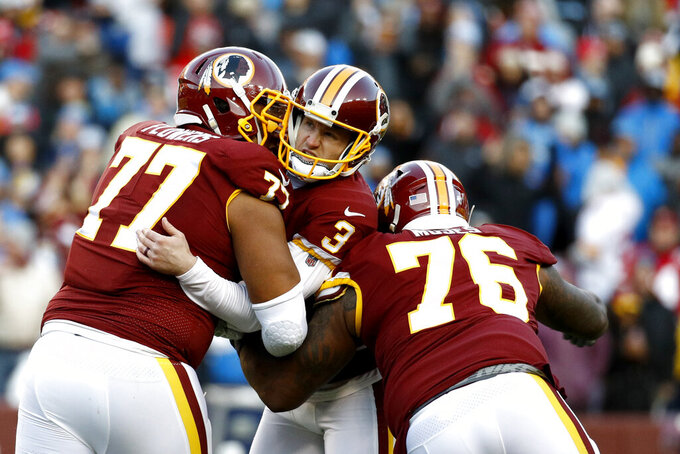 Washington Redskins kicker Dustin Hopkins, center, is mobbed by offensive guard Ereck Flowers (77) and offensive tackle Morgan Moses (76) after kicking the eventual game-winning field goal in the final seconds of the second half of an NFL football game against the Detroit Lions, Sunday, Nov. 24, 2019, in Landover, Md. The Redskins won 19-16. (AP Photo/Patrick Semansky)

ASHBURN, Va. (AP) — Finally, there was some joy in Landover because the Washington Redskins won a home game.

They stumbled to a 19-16 comeback victory against the Detroit Lions, ending a nine-game home losing streak and sending the (maybe) 30,000 Redskins fans in attendance home happy.

Even though Washington is still 2-9 and has a long way to go with a visit to the Carolina Panthers coming up next, this was a chance for players to take some solace in their work paying off.

“I felt like that was a team win: Special teams with Steven Sims and the way they blocked for him to get that (kick return) touchdown — that gave us great momentum; defense with some picks, some turnovers; offense with some explosive plays — that's what we've been missing in our offense,” rookie receiver Terry McLaurin said.

“I felt like that was really more of a complete team win. It showed us our potential going forward. We just got to find some way to build on that and continue to get stronger."

Third-year defensive lineman Jonathan Allen seems to have the right approach after an ugly win against another bad team.

“Whenever you have success in this league, you have to take it for what it's worth,” Allen said. “We're definitely not where we want to be at it, but for the time being, we're happy with the win we got.”

Callahan lit into players during a team meeting Saturday night, and it ticked off some veterans. But it struck the right chord with others, especially after getting blown out by the New York Jets the previous week.

“Coach Callahan ripped us apart and guys didn’t take that too fairly and wanted to come out here and prove that they were something that he said that they weren’t,” starting cornerback Quinton Dunbar said. “(He) is going to try and use all his tactics to try to get his guys going. Obviously, we haven’t been having a great year, so I guess he’s just trying to find different ways to get us going and keep us going.”

Rookie quarterback Dwayne Haskins missed a handful of open throws against Detroit, which he blamed on an injury to his right wrist. But he insisted he’s good to go, and Haskins will need to make those completions in the future.

“I feel like he's still a work in progress,” said McLaurin, who also played with Haskins at Ohio State. “He's showing some great signs of he's getting better. He's commanding the huddle a lot better, and he's making some plays. Obviously, he's going to want some back.”

With veteran cornerback Josh Norman benched for performance concerns mixed with injuries, Fabian Moreau intercepted Detroit’s Jeff Driskel twice and showed a significant step in his development. Norman almost certainly won’t be back next season, so Washington is counting on Moreau, Dunbar and rookie Jimmy Moreland as the future at the position.

“(Dunbar) is the best corner in the league and I’m just trying to be like him, learning from him,” Moreau said. “We just had a good game.”

Norman could play against Carolina — the team that released him from his franchise tag in 2016 following his only All-Pro season — but he’s nearing the end of the road with the Redskins. The 31-year-old hasn’t lived up to the $75 million, five-year contract he signed at the time and has particularly struggled this season.

“He's been fighting through some injuries this year, and at times we like to have some plays back for him,” Callahan said. “I love Josh and I’m proud of him in the way he's handled things and he's a true pro and a lot of ways and you can't say enough about his professionalism.”

Ryan Kerrigan was concussed Sunday, putting in danger his streak of 139 consecutive starts that ranks first among active NFL linebackers. Kerrigan, Los Angeles Chargers quarterback Philip Rivers and Baltimore Ravens cornerback Brandon Carr are the only players to start every game since the beginning of the 2011 season.

Haskins scrambled for 11 yards on the drive that put Washington in range for Dustin Hopkins’ go-ahead field goal. He’s not a running quarterback, but it’s another element for his growing repertoire.

“He didn't run a lot in college, so it's kind of cool to see,” McLaurin said. “That's encouraging because that's another thing that teams may have to account for going forward that if he has an open lane to run, he's going to take it and get a first down.”

With the Redskins double-digit underdogs at Carolina, defensive coordinator Greg Manusky should dial up the same blitzes and coverages that worked against Driskel when they face Kyle Allen.