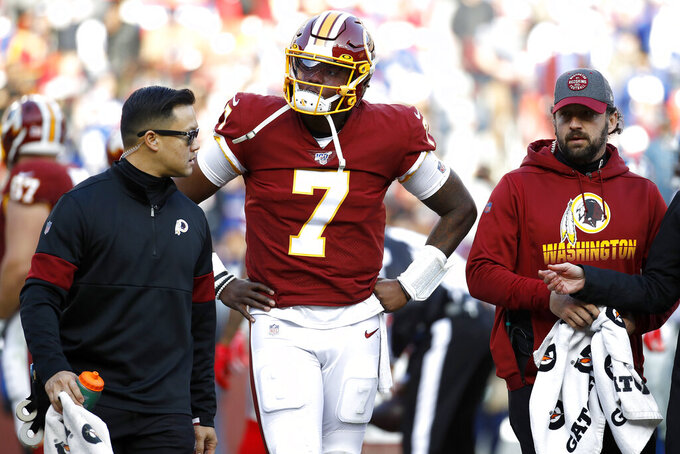 Washington Redskins quarterback Dwayne Haskins walks with trainers to a cart while being taken off the field after being sacked by New York Giants linebacker Lorenzo Carter during the second half of an NFL football game, Sunday, Dec. 22, 2019, in Landover, Md. (AP Photo/Patrick Semansky)

Dwayne Haskins was knocked out of Washington's game Sunday with an ankle injury but wants to end his rookie season on the field.

“I want to play," Haskins said of the season finale next week at Dallas. “And if I can, I will.”

He couldn't Sunday after he was sacked on the first play of the second half and carted off the field. Case Keenum replaced him and finished out the Redskins' 41-35 overtime loss to the New York Giants.

Fellow rookie quarterback Kyler Murray also was forced out because of an injury. The No. 1 overall draft pick departed with a hamstring injury midway through the third quarter of Arizona's 27-13 victory over Seattle.

Haskins was in the midst of his best NFL performance, completing 12 of 15 passes for 133 yards and two touchdowns in the first half. He hoped to return after his injury but the Redskins were cautious with the No. 15 pick in the draft, who played through an ankle injury Dec. 8 at Green Bay.

This time, the Redskins didn't clear him to return and owner Dan Snyder didn't want him to.

Haskins was in a walking boot after the game and will have an MRI exam. He said X-rays were negative.

Murray departed after leading a drive that finished with Zane Gonzalez's 46-yard field goal that gave Arizona a 20-7 lead early in the third quarter. Murray scrambled on the final play of the drive for 4 yards and never returned.

The Pittsburgh Steelers have injury concerns along with a tough road to the postseason after losing three key offensive players in their 16-10 loss to the New York Jets. Quarterback Mason Rudolph (left shoulder), running back James Conner (thigh) and center Maurkice Pouncey (left knee) all left and their availability for a must-win game next week against Baltimore is uncertain.

“That's what we're paid to do," coach Mike Tomlin said of the injuries. “We embrace that. We're professionals. We've got quality depth. The standard of expectation doesn't change. We didn't do enough today."

The Ravens are unsure of Mark Ingram's availability for that game after the running back sustained a calf injury in Cleveland after surpassing 1,000 yards rushing for the season. Coach John Harbaugh said Ingram sustained no structural damage.

The Browns lost running back Dontrell Hilliard to a left knee injury on a hard hit in the first half. He left the stadium on crutches and his leg immobilized.

The Seahawks are down to just one healthy running back after Chris Carson and C.J. Prosise both suffered what coach Pete Carroll called “season-ending” first-half injuries against Arizona. Carson left with a hip injury suffered in the second quarter and Prosise, his backup, suffered an arm injury on a big hit from Arizona’s Budda Baker later in the quarter and was ruled out.

The two injuries left rookie sixth-round pick Travis Homer as the only healthy running back on Seattle’s roster.

The Eagles lost two cornerbacks in their 17-9 victory over Dallas, with Ronald Darby leaving with a hip flexor Jalen Mills with an injured ankle.

Raiders cornerback Trayvon Mullen was taken off on a stretcher but was moving his arms after colliding with safety Curtis Riley on a reception by the Chargers' Andre Patton during the fourth quarter.

The Saints' Eli Apple hurt an ankle late in the first quarter and safety Marcus Williams hurt his groin in Tennessee, forcing New Orleans to move cornerback P.J. Williams to safety. Titans wide receiver Corey Davis was evaluated for a concussion in the fourth quarter.