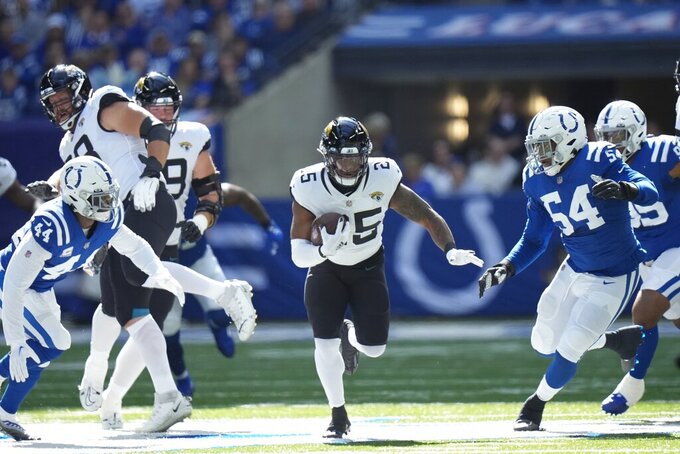 Jacksonville Jaguars running back James Robinson (25) runs during the first half of an NFL football game against the Indianapolis Colts, Sunday, Oct. 16, 2022, in Indianapolis.(AP Photo/AJ Mast) 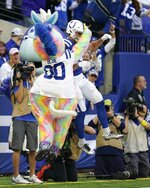 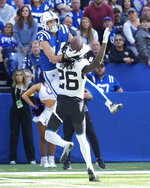 In the waning moments, the 15-year veteran delivered again.

Ryan read Jacksonville’s defense, relied on his instincts and then lobbed a 32-yard touchdown pass to rookie receiver Alec Pierce, who caught it just over the hands of a defender with 17 seconds left to give the Colts a 34-27 victory.

“Alec is so good on those kinds of routes and I think in that situation throwing the ball past the sticks and taking a shot, you can’t play scared,” Ryan said. “I thought it was a great call, a great route and I wanted to take a chance there.”

His perfect throw, despite taking a hit as he released the ball, capped a memorable day with a victory that may finally get the Colts’ offense righted.

Ryan was 42 of 58 for 389 yards with three touchdowns, no sacks and no turnovers. He broke the franchise’s single game record for completions and moved into seventh on the NFL’s career passing list.

But Ryan also knew what mattered most. Indy (3-2-1) snapped a two-game skid against its AFC South rival and improved to 1-2-1 in division play. Plus, Indy ended a touchdown drought that stretched to Week 4 and topped the 20-point mark for the first time in eight games.

“ Matt was hot,” Reich said. “So I slipped in a run every now and then, but I didn’t want to take it out of Matt’s hands.”

The Jags led the entire first half, extended the margin to 21-13 just five plays into the second half and responded with a 10-minute, 18-play drive after Indy had finally taken a 26-21 lead on Ryan’s TD pass to Jelani Woods early in the fourth quarter.

Trevor Lawrence responded with a 4-yard scoring pass to Christian Kirk for 27-26 lead with 2:44 to go. A 2-point conversion pass failed.

Lawrence was 20 of 22 with 163 yards and one score while running for two TDs.

But the Jags left too much time for the Colts, who had already moved into field-goal position and were facing third-and-3 when Ryan took a shot on Pierce.

There was nothing Shaquill Griffin could do to stop it.

“I played inside like I usually do, they kind of threw it over the shoulder, and they’d been calling so many pass interference (penalties) every time we were hand fighting,” Griffin said. "He was pushing, and I’m pulling and ended up tripping over his feet. Stuff like that is going to happen, so, yeah, that one hurt.”

Jaguars: The Jags had 150 yards rushing in the first half and finished with 243 against a defense allowing just 96.6 yards per game. ... Lawrence was sacked four times after being sacked only six times in the first five games. ... Travis Etienne Jr. had 10 carries for 86 yards including a career best 48-yard run early. ... JaMycal Hasty scored on a 61-yard run on his second carry of the season.

Jaguars: The Jags only significant injury appeared to be WR Jamal Agnew, who left the game in the first half with an injured knee.

Colts: Punt returner Keke Coutee had the game's scariest moment when he took a hard shot and remained on the ground as players from both teams took a knee. Eventually, he got up and walked straight to the locker room where he was diagnosed with a concussion. Jackson helped replace injured RBs Jonathan Taylor and Nyheim Hines before leaving late with an injured quad.

“I remember growing up he was like slinging it and the first time I met him, he said ‘No matter what, just keep slinging it,’" Ryan said, referring to Marino. "Any time you're mentioned in the same breath as Dan, it’s pretty cool. I'm proud of that.”

Colts: Head to Tennessee next Sunday for the fifth of six division games.