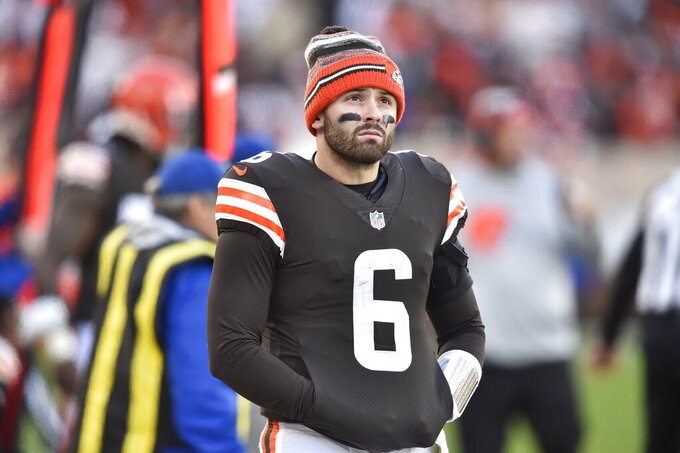 FILE - Cleveland Browns quarterback Baker Mayfield stands on the sideline during an NFL football game against the Baltimore Ravens, Sunday, Dec. 12, 2021, in Cleveland. With Deshaun Watson due to arrive any day to take over as Cleveland's franchise QB, Mayfield, who requested a trade last week after feeling betrayed by the Browns, is leaving. When and where he's going is still to be determined. (AP Photo/David Richard, File)

CLEVELAND (AP) — Baker Mayfield was once the No. 1 overall draft pick. He's not anyone's choice at the moment.

He's a quarterback without a team.

Cleveland's starter the past four seasons, Mayfield lost his job last week when the Browns pulled off a trade that shook the NFL by acquiring Deshaun Watson, a three-time Pro Bowler in Houston accused of sexual assault by 22 women.

With Watson due to arrive any day to take over as Cleveland's franchise QB, Mayfield, who requested a trade last week after feeling betrayed by the Browns, is leaving.

When and where he's going is still to be determined.

The quarterback market has dried up this week, with several trades and free agent signings eliminating possible landing spots for Mayfield, who is looking to resurrect his career after a dreadful 2021 season.

It's an astonishing fall for Mayfield, the top pick in 2018 who led the Browns to the playoffs in 2020 and seemed to have finally solved the franchise's two-decade-long search for a franchise quarterback.

He was the face of Cleveland, toast of the town. The Progressive insurance commercials with him and his wife, Emily, living inside FirstEnergy Stadium were a hit.

Even just a week ago, Mayfield still seemed in position to play a fifth season in Cleveland before Watson was persuaded to waive his no-trade clause when the Browns gave him a record $230 million fully guaranteed contract.

Mayfield went from under center to out the door — in an instant.

After the Watson trade was announced, Mayfield needed a new football home, and Indianapolis appeared to be a possibility for Mayfield. But the Colts weren't interested and traded for Atlanta veteran Matt Ryan. The Falcons then signed free agent Marcus Mariota, closing the door on another potential suitor for Mayfield.

The New Orleans Saints decided to re-sign Jameis Winston, wiping out another option for Mayfield.

Seattle remains a potential destination for Mayfield. But the Seahawks, who are starting anew after recently dealing Russell Wilson to Denver, want to try to Drew Lock first and perhaps draft a young QB to back him up.

It's all left Mayfield out.

He is due to make $18.8 million next season, and his contract makes it nearly impossible for the Browns to find a trade partner. There isn't a team willing to pay that hefty price for a backup quarterback, never mind one coming off shoulder surgery, a lousy season and with an image problem.

There's the possibility Cleveland might have to pay a big chunk of Mayfield's salary or throw in a draft pick just to be rid of him.

At this point, a quick separation would be ideal for both sides.

Unfortunately, this could drag on for a while.

A positive for Mayfield, as has been emphasized multiple times over the past week, is that the quarterback roulette wheel spins often and he'll get another chance somewhere — eventually. Things happen. Depth charts at quarterback are frequently changing due to injuries, trades and performance.

He'll get another chance to start somewhere. But before that, Mayfield may have to swallow hard and be someone's backup.

Mayfield has shown he's a capable QB and sometimes better than that. He is 29-30 as a starter and passed for more than 3,000 yards in each season. He followed a record-setting rookie season with a clunker in Year 2, but he worked on his game, bounced back and played well in 2020.

Last year went sideways for Mayfield and the Browns after the 26-year-old suffered a torn labrum in his left shoulder in Week 2. Mayfield gutted it out and played hurt. But in doing so, he exposed several on-field shortcomings — his size, decision-making and an inability to avoid pressure.

There was also a major disconnection with coach Kevin Stefanski. Mayfield publicly questioned Stefanski's play-calling, and even if he had valid reasons for the criticism, it was a bad look for him and the team. It also underscored a troubled relationship between quarterback and coach.

Mayfield's image may need as much of a makeover as his mechanics.

A two-time college walk-on who went on to win the 2017 Heisman Trophy while playing for Oklahoma, he's got to prove himself all over again.

It won't be in Cleveland.