Saints sticking with Dalton over Winston at QB vs. Rams 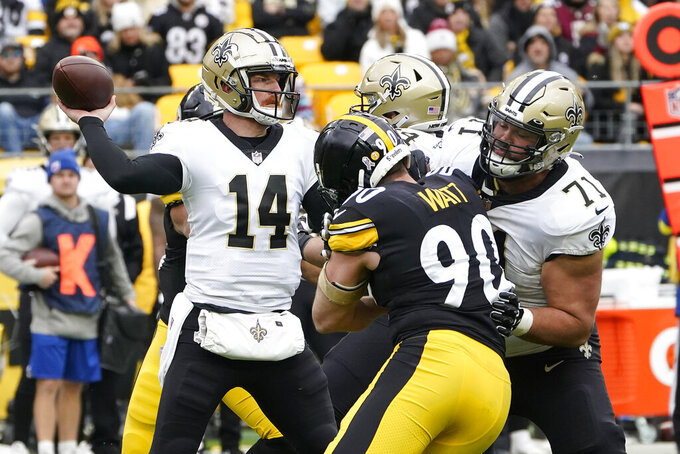 New Orleans Saints quarterback Andy Dalton (14) gets off a pass under pressure by Pittsburgh Steelers linebacker T.J. Watt (90) with offensive tackle Ryan Ramczyk (71) blocking during the first half of an NFL football game in Pittsburgh, Sunday, Nov. 13, 2022. (AP Photo/Keith Srakocic)

In announcing Wednesday that Andy Dalton would remain in the lineup Sunday against the Los Angeles Rams, the first-year Saints coach stressed that New Orleans' anemic offensive performance during its past two games stems from more than the performance of a single player.

“I know that's always going to be a hot-button topic," Allen said of whether to play Dalton or season-opening starter Jameis Winson. “You kind of want to look at one spot, but yet there’s a lot of factors, or a lot of positions, that have to play better.”

The decision comes after Allen said he would evaluate whether his offense might benefit from Winston returning to the lineup for the first time since Week 3.

Winston injured his back in Week 1 but continued to play for two more games while also nursing an ankle injury. But while he was healthy enough to suit up, he threw five interceptions in his last two starts, both losses.

Dalton has gone 2-5 as the Saints' starter. During most of his first five starts, New Orleans' offense moved the ball and scored with regularity — even during losses, which tended to hinge on mistakes such as turnovers or missed tackles.

But in their past two games — a home loss to Baltimore and a road loss to Pittsburgh — the Saints have set season lows for total yards. They gained 243 yards against the Ravens and 186 against the Steelers.

“Everybody understands the quarterback gets a lot of praise when things are going well and probably gets a little too much blame when things aren’t going well,” Dalton added. “That’s just the nature of it, but I’m thankful I’m in a position where I can try to pull us out of it.”

While the Saints are languishing at 3-7, they're still in the race for the NFC South title, trailing Tampa Bay (5-5) by two games with seven to go.

New Orleans hasn't had much injury luck. Top projected receiver Michael Thomas is on injured reserve for a second season in a row. Top cornerback Marshon Lattimore has missed five games and, more recently, the Saints have been without starting center Erik McCoy and starting left guard Andrus Peat.

“Guys are sticking together," Dalton said. "As tough as this season has been, we're still in a good place.”

Dalton is with his third team in three seasons. He joined each club as a backup and wound up being pressed into a starting role, going 4-5 with Dallas in 2020 and 3-3 with Chicago in 2021.

Winston, the NFL's top overall draft choice in 2015, spent five seasons with Tampa Bay, mostly as a starter, before the Buccaneers replaced him with Tom Brady in 2020.

Now Winston is in his third season with the Saints. After serving as a third-stringer in 2020 behind Drew Brees and Taysom Hill, he went 5-2 as a starter in 2021 before a knee injury ended his season.