Saleh changed Jets' vibe, but now it must transfer to field 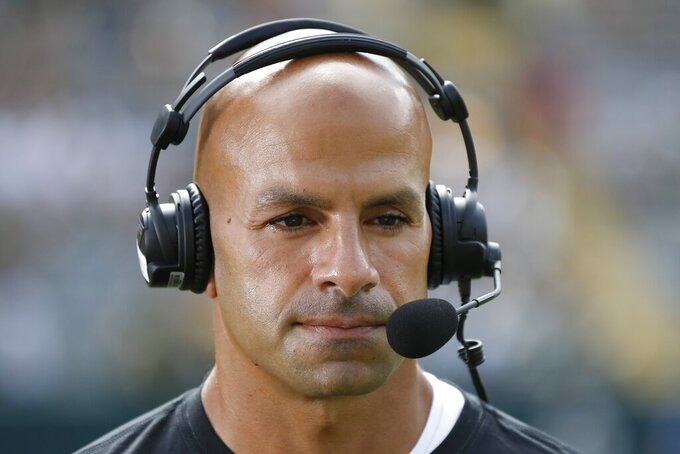 FLORHAM PARK, N.J. (AP) — The vibe around the New York Jets began to change the day Robert Saleh was hired as coach.

The stench of a 2-14 season instantly dissipated and the disappointment and frustration of 10 straight years without a postseason appearance began to fade.

The team was overwhelmingly excited about Saleh's arrival. And the hiring was met with rare approval by both long-suffering fans and critical media. Maybe — just maybe — the Jets finally got this right.

“His character and passion,” Jets vice chairman Christopher Johnson said in January, “are what this team needs.”

Fast forward almost eight months and Saleh's impact is clear with his “All Gas, No Brake” mantra etched into the minds of the players and on the facility doors. Saleh has engineered a culture change around a franchise that needed an exorcism.

But now, it all must transfer to the field. And stay there. Starting in Week 1 at Carolina.

“I’m anticipating a lot of learning moments throughout this entire season," Saleh said. "We’ve gotten some great opportunities with regards to game management and reviews and timeouts and all that stuff. The difficulty level is only going to amplify once the regular season hits. So, there’s still going to be many more learning opportunities to come.”

The players have bought in, though. And they appreciate Saleh's breath-of-fresh air philosophy.

The next phase of the franchise's shift came when the Jets traded Sam Darnold to the Panthers and drafted Zach Wilson with the No. 2 overall pick.

The former BYU star has impressed his coaches and teammates with his tireless preparation, and his solid summer provided a measure of confirmation to what Saleh and general manager Joe Douglas already believed: Wilson can be their QB for years to come.

The Jets have been looking for a consistently successful quarterback since the days of Joe Namath. And Wilson will head into the season as the latest to try to shoulder those lofty expectations.

“I have confidence in myself and this team and I shouldn’t just tell myself, ‘Oh, there’s going to be rookie mistakes,’” Wilson said. “You know, there is, but you can still do well with rookie mistakes, you can still learn from those. You can make a mistake in a game, but still finish strong and just move on.”

The Jets will head into the season with one of the NFL's youngest rosters, with at least eight players — including Wilson — who are either rookies or in their second year possibly starting in Week 1.

“Pete Carroll once said, ‘You can’t be afraid to play young guys,’” Saleh said of the Seahawks coach who is one of his mentors. “They’re hell on wheels and they’re fun to watch.”

A major criticism of the Jets the past few seasons was the lack of playmakers around Darnold. Well, Douglas has surrounded Wilson with quite a few.

The backfield in coordinator Mike LaFleur's offense has options in the veteran Tevin Coleman along with Ty Johnson, La'Mical Perine and rookie Michael Carter, a fourth-rounder. The wide receivers were upgraded with free-agent signings Corey Davis and Keelan Cole and second-rounder Elijah Moore to go with Jamison Crowder, Denzel Mims and Braxton Berrios.

Tight end remains a bit of an uncertainty after New York traded Chris Herndon to Minnesota this week and cut Ryan Griffin and Daniel Brown. Tyler Kroft was signed in the offseason appears to be the starter.

While the success on offense will ultimately be determined by Wilson's development, the big guys up front will play a major contributing role while executing a new zone-blocking scheme.

Left tackle Mekhi Becton had a concussion at the end of camp and first-round left guard Alijah Vera-Tucker didn't play in the preseason because of a pectoral injury, so chemistry will be a focus early on. Morgan Moses was signed in the offseason to compete with George Fant for the right tackle spot, which was still undecided.

The loss of defensive end Carl Lawson to a ruptured Achilles tendon was deflating, especially because Saleh and coordinator Jeff Ulbrich planned on him being a consistent pass-rushing presence. The Jets' late-summer trade for Shaq Lawson should help fill the void.

But the rest of the line is solid and should still cause fits with Quinnen Williams, Sheldon Rankins, Folorunso Fatukasi and John Franklin-Myers leading the way.

The Jets' biggest question mark is their cornerbacks group, which is alarmingly young and inexperienced — especially after the surprising cut of Bless Austin.

Bryce Hall, going into his second year, is one projected starter, with Brandin Echols (sixth-rounder) possibly in the mix along with fellow rookies Jason Pinnock (fifth-rounder) and Isaiah Dunn (undrafted), and Javelin Guidry (second season). Rookie Michael Carter II (fifth-rounder) is the likely nickel corner. There will be a lot of learning on the jobs — and possibly long days — in the secondary.