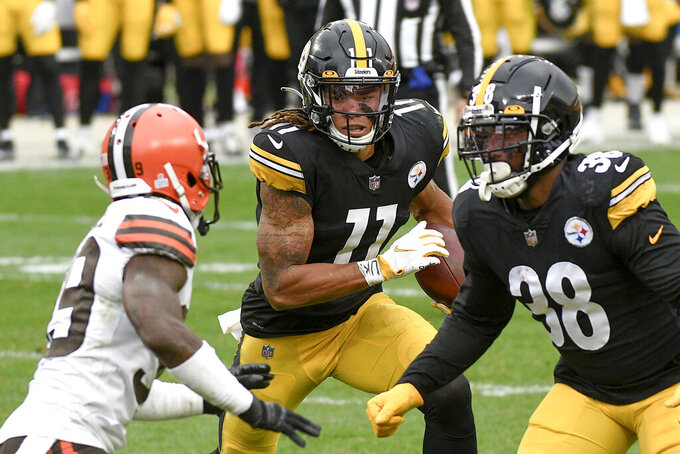 Pittsburgh Steelers wide receiver Chase Claypool (11) runs past Cleveland Browns cornerback Terrance Mitchell (39) to follow blocking by running back Jaylen Samuels (38) as he runs for a touchdown during the second half of an NFL football game, Sunday, Oct. 18, 2020, in Pittsburgh. (AP Photo/Don Wright)

However, the Seahawks didn't lose any ground and maintained the top spot in the latest AP Pro32 poll.

The Seahawks received nine of 12 first-place votes for 377 points in balloting Tuesday by media members who regularly cover the NFL.

The Seahawks head to Arizona on Sunday to face the NFC West rival Cardinals.

“The Seahawks still will have to find some defense if they plan on winning it all,” said Charean Williams of Pro Football Talk. “Russell Wilson and the offense are going to need help at some point.”

The Kansas City Chiefs inched up a spot to No. 2 after a 26-17 victory over the Buffalo Bills on Monday. The Chiefs earned two first-place votes for 366 points, while the loss dropped the Bills one spot to No. 9.

“The Chiefs rebounded from last week’s loss to the Raiders by going into Buffalo and beating another AFC contender,” said Jenny Vrentas of The Monday Morning Quarterback. “They did so by centering the ground game, proving that the Chiefs can win in myriad ways.”

The unbeaten Pittsburgh Steelers also moved up a spot to No. 3 and the Tennessee Titans, the league's other 5-0 team, received the remaining first-place vote and gained two places to No. 4.

The Steelers and Titans meet Sunday in Nashville in the top matchup of Week 7. The game was originally scheduled for Oct. 4 before it was postponed because of the Titans' COVID-19 outbreak.

The Steelers-Titans game will be just the eighth time in league history that undefeated and untied teams with at least five wins have met in the regular season, the sixth such game since the 1970 merger and only the fifth in the past 46 seasons.

The Baltimore Ravens remained at No. 5 as they enter their bye week after holding off the Philadelphia Eagles 30-28.

The Green Bay Packers slid four spots to No. 6 after getting routed 38-10 in Tampa Bay. And the first-place NFC South Buccaneers rocketed up seven spots to No. 7.

“Tom Brady outdueled Aaron Rodgers in a statement game for the Buccaneers, who shook off last week’s disappointment in Chicago to produce a tour de force performance against the previously unbeaten Packers,” Newsday's Bob Glauber said. “It’s Brady over Drew Brees so far in the NFC South’s battle of forty-somethings.”

Another first-place NFC team making a big climb was the Chicago Bears in the North, who moved up five spots to No. 8.

“If The Associated Press had a Comeback Coach of the Year award, Bears defensive coordinator Chuck Pagano would be the front-runner,” said Alex Marvez of SiriusXM.

“After a disappointing first year under his purview, Chicago has held three of its last four opponents under 20 points. Khalil Mack (4 1/2 sacks in the past five games) is looking like his old self as well.”

The New Orleans Saints rounded out the top 10 as they come off a bye and host Carolina this week.