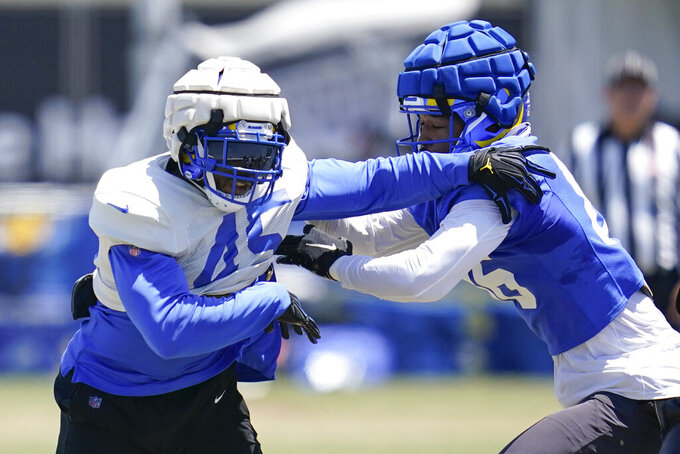 IRVINE, Calif. (AP) — Bobby Wagner is still getting used to the fact he's now working with Sean McVay, not against him.

After five years of trying to shut down McVay's offense two or three times per season for the Seattle Seahawks, Wagner is now making the Los Angeles Rams better.

Instead of attempting to get into McVay's head to anticipate his moves, the veteran linebacker and the offense-minded coach are putting their heads together.

“Now we get to feed off one another,” Wagner said. "His energy has been crazy. We’ve been in constant communication, even in the offseason. Reaching out, just checking in and stuff like that. It’s been cool. These last couple of months, being able to be coached by him has been a blessing for sure.”

The Rams signed the 32-year-old Wagner to be the game-changing inside linebacker they’ve decidedly lacked in recent years. But the defending Super Bowl champions also signed the six-time All-Pro for the impact he’ll have across the organization, and the signs are already showing as the Rams head into their preseason opener against the Chargers on Saturday night.

Practically every player in a horned helmet speaks rhapsodically about Wagner’s impact on their work habits and football intelligence, but they also can’t wait to see the impact he’ll have on Sundays.

“You go back and watch the plays (at practice), and you’ve just got a smile on your face,” Aaron Donald said. “I might jump on my gap, and then he’s there to feel it so fast, because he’s just downhill. He understands where things are going, and he’s able to play so much faster. Just seeing the way he moves, the way he plays, definitely gets us excited.”

The Rams didn't sign Wagner specifically to teach Ernest Jones how to be a great inside linebacker, yet Jones sometimes feels as if he hit the football lottery. He'll spend his second NFL season lining up next to one of his idols — and then picking his brain afterward.

“It’s crazy that he’s playing with us now and that I’m learning from him, because he was like the guy that I always watched,” Jones said.

Wagner will have the green dot on his helmet as the Rams' defensive signal-caller, and he has already assumed a natural leadership role beyond barking out signals: He's a sounding board for his teammates and an example to watch every day in practice.

Jones frequently finds himself admiring Wagner's nose for the ball and knack for positioning.

“That’s like every day, even when I’m watching film and he makes the plays that the normal linebacker wouldn’t make," Jones said. "The average one wouldn’t, but he goes out there and does it so well. Every time I see that, I’m like, ’That’s the reason why his name is so well-known, and why he’s Bobby Wagner.'”

Before Wagner's arrival, McVay's Rams appeared to pay little mind to the impact of an inside linebacker. Cory Littleton had two productive seasons at the spot, but Los Angeles has otherwise fielded modest contributors at the position. Opponents noticed, targeting the likes of Troy Reeder, Kenny Young and Micah Kiser in recent years, particularly on pass plays.

But the Rams drafted Jones in the third round last year and fast-tracked him to a starting spot, particularly after he showed solid pass coverage abilities. When Wagner was dropped by Seattle and the Rams found themselves with cap room from Von Miller's departure for Buffalo, they signed him in a move that signaled a change in philosophy at the position.

At least, that's the suspicion: How defensive coordinator Raheem Morris will use both Wagner and Jones is a question that won't be answered until September. But their presence provides several new options for the Rams as they incorporate two inside linebackers into the defensive scheme installed by Brandon Staley and refined by Morris into a championship-winning setup last season.

Wagner has made it clear he never wanted to leave Seattle, but the benefits of moving home are already obvious. Wagner was born in Los Angeles and raised in its outer suburbs, and his family members were regular presences at the Rams' training camp in Irvine.

Wagner already appears comfortable with his new team, and the rest of the Rams are grateful he has embraced a late-career change of scenery. Outside linebacker Terrell Lewis also grew up idolizing Wagner, but he already learned his new teammate is here to work on winning a second ring — and not to reminisce about the Legion of Boom or any past glories.

“I talk to Bobby a lot, just about the way he takes care of his body and things I’ve seen over his career," said Lewis, who has endured numerous injury problems in his two seasons.