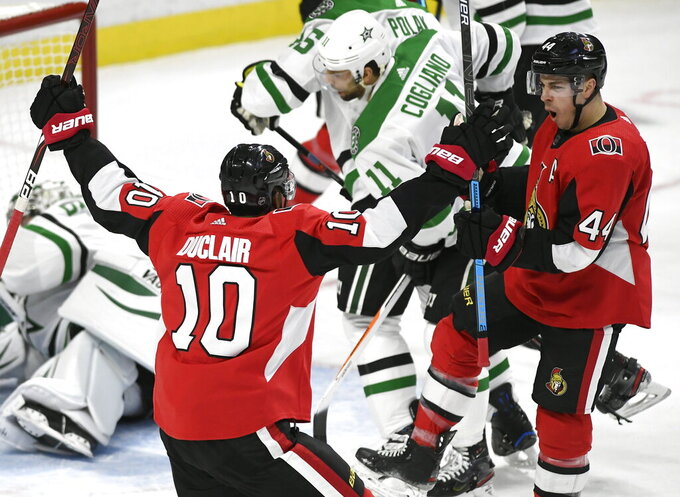 The Carolina Panthers jumped into the mix Monday by acquiring center Vincent Trocheck from the Florida Panthers on a busy morning in advance of the mid-afternoon deadline.

Namestnikov joins his third team this season in being traded to Colorado. Soon after, Pageau was traded to the New York Islanders.

Namestnikov, who opened this season with the New York Rangers, has 13 goals and 25 points, and joins an injury depleted Avalanche team that currently sits second in the Central Division. He's a versatile forward who can fill several roles and leads the league with four short-handed goals this season.

Pageau has scored a career-best 24 goals and has 60 points, and has the potential of providing the the Islanders some much-needed offensive punch. The Isles hold the East's first wild-card spot, and in the midst of six Metropolitan Division teams separated by eight points.

Both players were in the final years of their contracts, and eligible to become unrestricted free agents this summer.

The Senators, all but out of playoff contention, are not surprisingly selling off assets as part of their plan to rebuild through youth. Ottawa acquired a conditional first-round draft pick from the Islanders for Pageau. They would also add a 2022 third-round pick if New York wins the Stanley Cup this year.

The Senators acquired a 2021 fourth-round pick from Colorado.

"He's excited about the prospects of joining the Avalanche," said Dan Milstein, Namestnikov's agent. “He definitely feels this team has every ingredient to win the Cup.”

Florida traded Trocheck to the Hurricanes as the Panthers fight for one of the East's last playoff spots.

The Panthers are getting forwards Erik Haula and Lucas Wallmark from the Hurricanes, as well as a pair of prospects in center Eetu Luostarinen and defenseman Chase Priskie. Haula has 12 goals and 10 assists this season, Wallmark 11 goals and 12 assists and Luostarinen has appeared in eight games.

Trocheck had spent his entire NHL career, parts of seven seasons, with Florida. He appeared in 420 games, with 111 goals and 171 assists. He had a career-best 31 goals two seasons ago, and had 10 goals and 26 assists in 55 games this season.

He was a Panther from the beginning; the team took him in the third round of the 2011 draft with the 64th overall selection. But this move also provides Florida future flexibility; Haula is an unrestricted free agent this summer and Wallmark a restricted one.

"Vincent brings elements of skill and competitiveness that fit the mold of the style we want to play," Hurricanes president and general manager Don Waddell said. "He's a right-handed center who is excellent in the face-off circle. With two years left on his contract after this one, this fills a need for our roster for this year and moving forward."

New York Rangers forward Chris Kreider and Minnesota defenseman Jonas Brodin were among the skaters still on the market. And the Chicago Blackhawks might be in position to trade either of their two goalies, Robin Lehner or Corey Crawford.