Some NFL prospects made most of extra college season 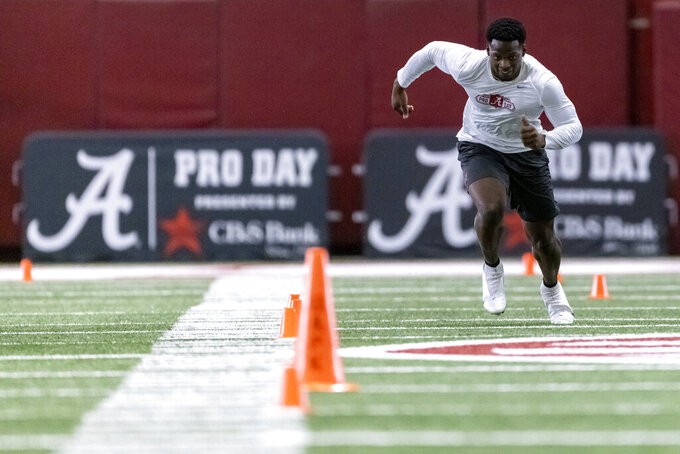 Alabama's Brian Robinson Jr. went from career backup to featured back after returning for his extra year of eligibility, improving his NFL draft stock in the process.

Robinson isn't alone. Underclassmen get much of the attention in the draft running Thursday through Saturday, with top prospects often leaving school early. Others such as Robinson, Pittsburgh quarterback Kenny Pickett and Florida State defensive end Jermaine Johnson stayed for a fifth or even sixth year and likely worked their way into higher picks and bigger paydays.

Robinson, Johnson, Mississippi defensive end Sam Williams, Kentucky offensive lineman Luke Fortner and Cincinnati cornerback Coby Bryant are among those who made the most of that extra year allowed by the NCAA because of the COVID-19 pandemic.

So did Pickett & Co.

Parlayed his extra season into status as a potential Day 2 pick and won the Jim Thorpe Award as the nation's top defensive back. Bryant took advantage also of teams throwing his way opposite projected top-10 pick Ahmad Gardner on one of the nation's top pass defenses. He played in a whopping 63 games and was a first-team All-American Athletic Conference pick his final two seasons, racking up three interceptions, two forced fumbles and 11 passes defended as a senior. Bryant finished with 10 interceptions and 35 passes defended.

Played center for his sixth year after spending most of his career at guard. Fortner, who played in the Senior Bowl, started 36 consecutive games and saw action in 55 for Kentucky. His versatility, experience and brains could help earn him a spot in the middle rounds. Fortner graduated with a degree in mechanical engineering in December 2019, has completed work for a master's degree in aerospace engineering and is on track to receive an MBA this spring. He's hoping to work in a different field in the fall.

Johnson emerged as a hot pass-rushing commodity — and potential first-round pick — after two seasons at Georgia. He racked up 70 tackles, 18 tackles for loss and 12 sacks in his lone season with the Seminoles. Johnson was the first player to win Atlantic Coast Conference offensive or defensive player of the year honors in their first season with a program. The second-team AP All-American made just four starts in two seasons at Georgia, with 36 tackles, including 8.0 for loss and 6 1/2 sacks. A junior college product, Johnson was featured on Season 3 of the Netflix show “Last Chance U.”

The potential first-round pick elevated his game — and his stock — after returning for his fifth season. Now, he could be the first quarterback drafted this weekend in Las Vegas. Pickett passed for a Pitt-record 4,319 yards and set the Atlantic Coast Conference record with 42 touchdown passes against just seven interceptions. That's compared to a 13-to-9 ratio in each of the previous two seasons. He finished third in the Heisman Trophy balloting and won the Johnny Unitas Golden Arm Award. Pickett led the Panthers to their first ACC championship in the process. He saw action in four games and started one in 2017.

The 6-foot-1, 225-pound hometown product finally got his time to shine in Tuscaloosa this past season. Robinson stuck around after waiting his turn behind future NFL starters Najee Harris and Damien Harris. He nearly doubled his career numbers in 2021 with 1,343 rushing yards and 14 touchdowns on 271 carries. Robinson had 1,361 yards and 15 touchdowns through his first four seasons. He also showed some versatility with 35 catches after logging just 17 coming into the season. Robinson is widely projected in the third-round range.

Williams was one of the Southeastern Conference's top pass rushers. He also ran a 40 in 4.46 at the NFL combine. Williams had 12 1/2 sacks, 16 tackles for loss and four forced fumbles last season. He tallied 10 sacks combined in the previous two seasons. The former junior college transfer had multiple sacks in four games in 2021 and could have moved himself into the third-round range.