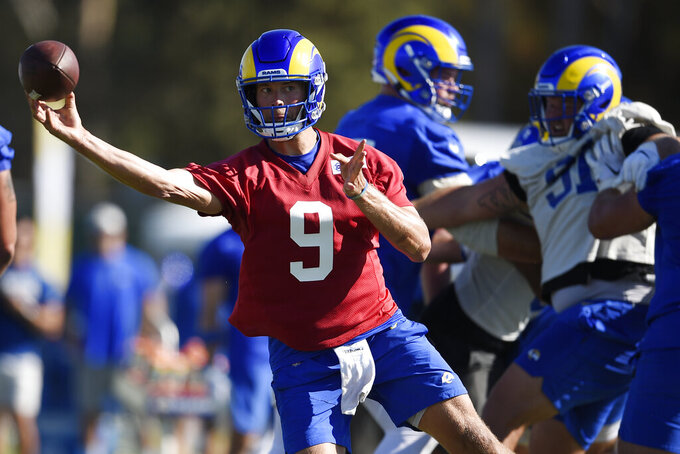 IRVINE, Calif. (AP) — When the Los Angeles Rams held training camp behind closed doors last season, it started with the defense getting the better of the offense.

That proved to be a preview of coming attractions, with the Rams fielding the best defense in football in terms of points and yards allowed, while the offense struggled to consistently get into the end zone.

It’s a much more even fight this year, and new quarterback Matthew Stafford looks to be the reason why, much to the delight of thousands of fans in attendance every day watching their lively practices.

“I think it’s Matthew, man,” outside linebacker Leonard Floyd said. “He’s a veteran quarterback so he make it a little tougher at practice. That ain’t doing nothing but making us better on defense.”

The battle between the two sides was embodied by a spirited set of red-zone drills on Saturday. Cornerback Jalen Ramsey had a pick-six off Stafford early on, but he responded with a series of impressive throws to wide receiver Cooper Kupp and running back Darrell Henderson.

Coach Sean McVay was impressed by how Stafford and the offense bounced back after the turnover.

“He’s unaffected by it,” McVay said. “Comes back, made a lot of really good plays. But he’s got that veteran feel, and it’s practice too. He’s trying things. I like the fact that he’s using these opportunities as learning ops and really kind of challenging, testing some things out, getting familiar playing with the skill guys that he’s gonna be playing with so very pleased with him. Long way to go, but I love working with Matthew.”

By trading Jared Goff, two first-round and a third-round draft picks to Detroit for the 33-year-old Stafford, the Rams gambled that he would lift the passing game and help generate enough scoring to put them back into Super Bowl contention. The first few days of practice have indicated the risk might just pay off.

But McVay said what Stafford is doing for the defense right now is just as important.

“The goal is being able to push one another when you get into those competitive situations. That’s exactly what we want to be able to see. I thought there was really some good plays by both sides,” McVay said.

Ramsey had been close to intercepting Stafford for several days, wide receiver Robert Woods said, and the interplay between the quarterback and two-time All-Pro defensive back has created a spark for their respective units.

“I think Stafford kind of saw how great he is as a corner,” Woods said. “But really it just shows how we’re coming out here and we’re competing every single day – best against best – and trying to make plays.”

Both sides of the ball have also been energized by the presence of fans at UC Irvine. The shouts of one particularly boisterous individual caught McVay by surprise as he spoke with reporters, causing him to lose his usual laser focus while discussing Stafford’s wide receiver corps.

“It’s very distracting, that guy over there,” McVay said with a laugh.

With autograph sessions and other face-to-face contact with fans not permitted because of COVID-19 protocols, Floyd offered up a souvenir by throwing one of his gloves into the stands on Friday.

McVay said the lift from the crowd was especially evident during the red-zone drills.

“You realize what a great atmosphere and environment that creates to one of the many things that makes football special. I think our players thrive off that, and it was right in that end zone where there’s a lot of fans so guys had fun. And it was a lot of good plays and good things we can teach off of,” McVay said.

And when the Rams get into pads for the first time on Tuesday, Woods expects the intensity on the field will be heightened even more.

“It turn it up another notch,” Woods said. “First couple days of camp in shirt and helmet is nice, but you get on the pads, you got to turn it up to another level. You got to be more physical, see who’s gonna show up and fight for that edge or fight for that spot.”

NOTES: Rookie DL Bobby Brown will undergo surgery to repair a torn ligament in his thumb. McVay said Brown, who was drafted in the fourth-round out of Texas A&M, should be able to return in a week. … Rookie DB Robert Rochell will undergo wrist surgery on Monday. McVay did not have a timetable for the return of Rochell, a fourth-round draft pick from Central Arkansas.