Stingy defense has Pats in good shape ahead of tough stretch 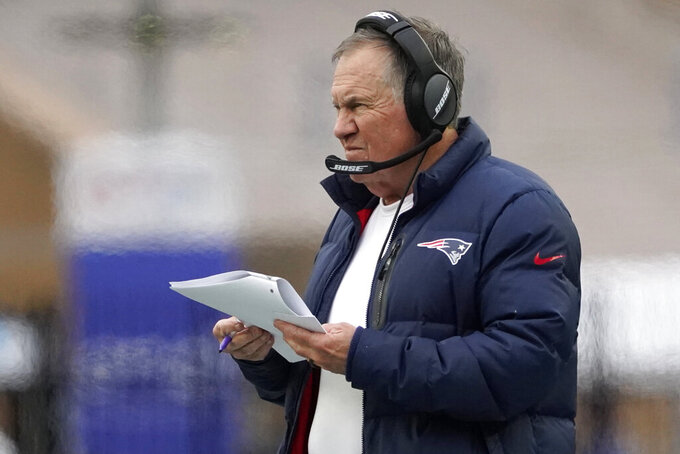 The Patriots were solid in all three phases as they romped to a 36-13 win over Tennessee on Sunday. It was their sixth straight victory and kept them atop the AFC East standings with five games remaining.

It sets up a pivotal three-game stretch that includes two games against defending division champion Buffalo (Dec. 6 and Dec. 26). That sandwiches the Patriots' Week 14 bye and a trip to Indianapolis (Dec. 18) to face a Colts team that blew out the Bills earlier this month.

“It’s a huge challenge. We know that,” coach Bill Belichick said. “When the schedule comes out, it’s always going to be tough in New York, Miami, Buffalo. Division games on the road are always challenging. We look forward to every game: home, away, neutral site. Wherever they are, we’ll be ready to go and be ready to compete.”

The Patriots’ blueprint for success has been to follow the lead of a defense that has forced 17 turnovers and allowed just 11 points per game during the win streak.

That has taken a lot of pressure off rookie quarterback Mac Jones, who continues to be efficient while developing chemistry with a receiving corps that has hauled in 10 of his 16 passing TDs this season over the last six games.

Receiver Kendrick Bourne said it’s why he doesn’t think there’s a limit on what this team can achieve.

“I don’t think there is a ceiling at all. We try to emphasize that,” he said. “(Team captain Matt) Slater just talked to us about not getting overzealous about ourselves. Nothing like that. Just being in the moment and playing each game, each week, and thinking about that game. We’re on to Buffalo now and that’s the focus. That’ll be good for us to just certify ourselves.”

The defense forced four turnovers for the third time this season, coming away with three fumble recoveries and an interception. CB J.C. Jackson had the pick, increasing his two-year interception total to 16 (nine in 2020 and seven in 2021) to tie Asante Samuel (10 in 2006 and six 2007) for the most INTs in consecutive seasons in team history. Jackson also was credited with his first career forced fumble.

The Patriots have had trouble scoring touchdowns in the red zone at times and those problems returned Sunday. They scored on each of their first four possessions of the game, which included three straight trips inside the 20. But only one of those drives resulted in a touchdown. That inefficiency could be a hindrance to making a deep run in the postseason.

“It just needs to continue to improve,” Jones said. “We’ve put a lot of stress on it, so there’s nothing that the coaches aren’t doing or anything. It comes down to us and executing.”

K Nick Folk connected on five field goals, marking his fifth game in 2021 with four or more. The NFL record for most games in a season with at least four field goals is six by David Akers in 2011 with San Francisco.

The Patriots’ run defense had a rough day, surrendering a season-high 270 yards to a Titans team playing without star Derrick Henry. Dontrell Hilliard and D’Onta Foreman both eclipsed 100 yards.

The Patriots had only a few players leave the game briefly and all were able to return. The list included linebacker Dont’a Hightower, who missed a few plays in the first half after being poked in the eye.

3 — number of consecutive wins by 20 points with the same rookie starting quarterback. The only other team to do that was the Seahawks with Russell Wilson in 2012 (Weeks 14-16).

New England gets an extra day of rest heading into next Monday night’s matchup with the Bills. The Patriots have a bye in Week 14.