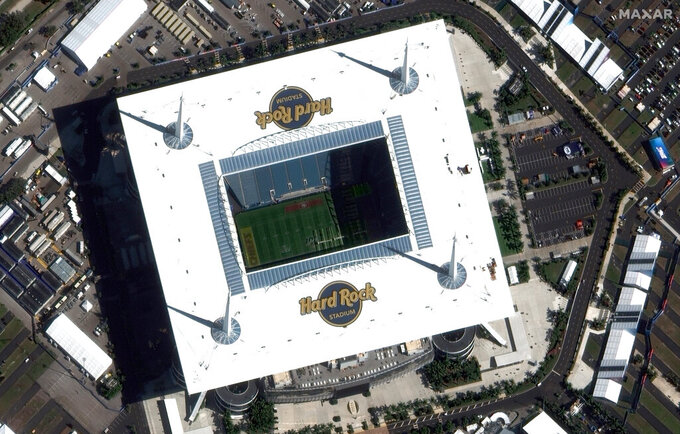 MIAMI GARDENS, Fla. (AP) — The dress rehearsal for the Super Bowl is incredibly elaborate, and the NFL needed some football players to help ensure everything on Sunday will go according to plan.

About 50 players from the high school in Parkland, Florida — the place where 17 students, teachers and staff were killed in a massacre on Feb. 14, 2018 — got to take the field at Hard Rock Stadium on Friday afternoon for a few hours, pretending to be members of the Kansas City Chiefs and San Francisco 49ers.

They ran some plays to help television crews work on their camera angles, went through a walkthrough of the pregame coin toss with referee Bill Vinovich, even lined up just as the Chiefs and 49ers will for “The Star-Spangled Banner” — and some of them even got a quick meet-and-greet with anthem singer Demi Lovato afterward.

“They basically split us up, one side was the Chiefs and the other side was the 49ers,” Stoneman Douglas coach Quentin Short said. “The smiles I saw on these kids’ faces, the excitement of running out of the tunnels just like the teams will, they were having a blast, man. To be on the actual field the Super Bowl is going to be played on, it was awesome.”

The NFL has used high school players as stand-ins at the Super Bowl rehearsals for some time. And when it came time to extend a team an invitation this year, organizers apparently knew which school to ask. The Miami Dolphins said Fox, which is airing the game, made the final call.

“The Dolphins and the NFL and Fox reached out to us,” Short told The Associated Press. “They asked us if we’d be interested and obviously I said, ‘Heck, yeah.’ There was no way we were turning down this opportunity.”

Stoneman Douglas has received plenty of support from the South Florida sports community since the shootings two years ago. The Miami Heat sent players and coaches to meet with students and other NBA teams have made similar gestures, the Miami Marlins invited the school’s baseball team to play at Marlins Park, the Dolphins have given money and hosted clinics for players and the Florida Panthers brought the school’s hockey team onto the ice to meet a surprise guest — the Stanley Cup.

Stoneman Douglas quarterback Matthew O’Dowd said he understood the significance of getting the chance to be part of the show on the field where 49ers quarterback Jimmy Garoppolo and Chiefs quarterback Patrick Mahomes will meet on Sunday.

“It’s a great experience for the people who get to go and do it,” O’Dowd said. “It was amazing, it was fun and it was a great team-bonding thing. We got to go, meet people, hang out with our coaches ... I can’t really describe it. It was just great.”

Nothing will make up for what happened on Feb. 14, 2018, when the 17, including assistant football coach Aaron Feis, were killed. But experiences like getting an up-close-and-personal look at the Super Bowl certainly help with the healing, if only for a few hours at a time.

“The best part about it was going out on the field and practicing some plays so they could make sure their cameras worked,” O’Dowd said.

Short is entering his second season as the head coach at Stoneman Douglas. He replaced Willis May, who stayed with the Eagles for a year after the shooting before taking another job — saying it was simply too hard on him to remain at the school.

The three-story classroom building where the shooting took place is still standing, though it has been permanently closed. There have been several movements suggesting it should be demolished, and likely one day will be, but it remains intact simply because it is evidence and needs to be preserved until the trial of the confessed shooter is complete. Prosecutors have said they want jurors, whenever the trial begins, to be able to walk through the building and envision what occurred.

The building can be seen from the football field. The reminders of that day’s horror are constant.

“It depends on the person and what your experience was that day and where you are in the recovery process,” Short said. “Everybody has gone through so much emotion, so much stuff, trying to handle all of it. Those 17 are always on our mind, and I don’t want to say it’s normal now because it’s not normal. We go back to that scene every single day. That building is still there. The memories are always going to be there.”