Super party on for fans in Tampa, even if it's more low-key 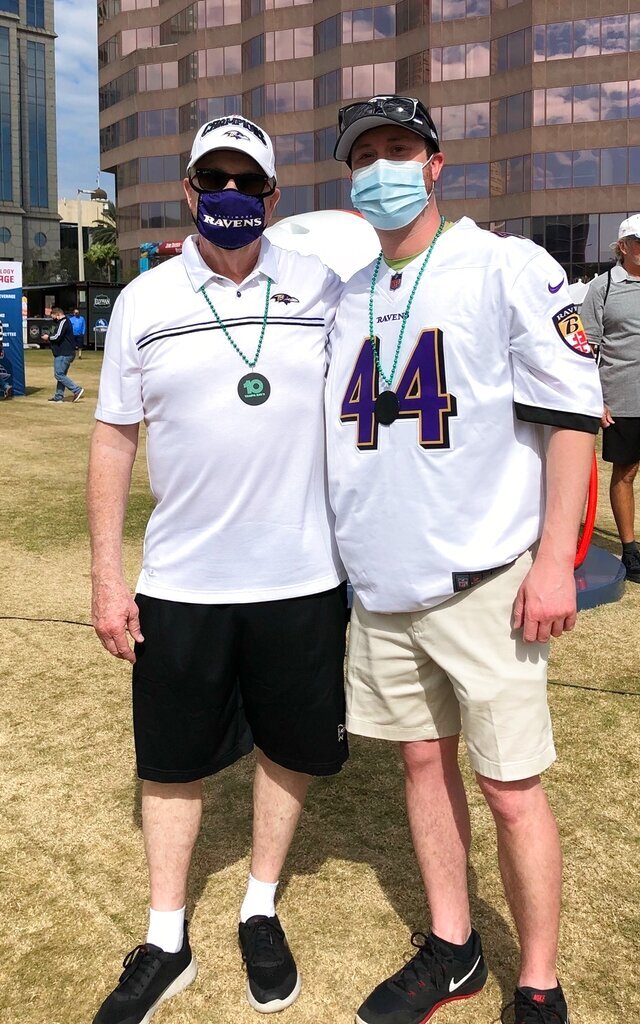 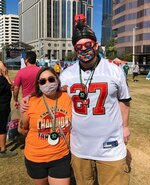 TAMPA, Fla. (AP) — Craig Cathers is decked out like a guy who's ready — totally fired up — for his team to play in the Super Bowl.

The 37-year-old native of Plattsburgh, New York, who recently moved to Minneapolis showed up at the NFL's Super Bowl Experience theme park in downtown Tampa wearing a white autographed No. 27 LeGarrette Blount jersey, a pirate ship hat and sunglasses with the team's logo on the lenses.

And, in a vivid reminder of the unusual times during a pandemic, a colorful face mask.

“When they played Green Bay in the NFC championship, I said, ‘If they beat Green Bay, we’re going to Tampa,’” Cathers said. “And here we are. We’re in Tampa.”

The scene around downtown is still bustling with people from the area and a smaller-than-usual flock of out-of-towners during the days leading to the big game. They’re just happy there’s a Super Bowl to celebrate even if the party isn’t as big as usual.

Cathers and his girlfriend Coreana Fairbanks were among a moderate crowd of football fans checking out the scene at the NFL's interactive theme park Friday. Everyone was required to wear face masks to get in — and the DJ would take a quick break from spinning tunes to shout out an occasional reminder to make sure everyone's mouths and noses were covered.

“Coming here, we talked about it and we said when are we ever going to do this again?" said the 33-year-old Fairbanks, a native of Minneapolis. "And we knew the safety precautions we’re taking and we felt safe doing all of this.”

Thomas Qualk, a 33-year-old resident of Bellmawr, New Jersey, is a Browns fan — as evidenced by his No. 92 Courtney Brown throwback jersey. He planned the trip in November, and wasn’t deterred by any potential health concerns.

“I figured Florida was going to do everything they needed to do to make sure everything was good,” Qualk said.

Apparently not everyone is comfortable taking the risk. Restaurants, local business and hotels aren't seeing the usual high traffic of patrons expected during a Super Bowl week.

“There’s usually like 10,000 people milling around,” said Paul Smith, a resident of Thurmont, Maryland, who has traveled with his son Montgomery to several host cities. “This year, there’s like nobody here.”

Downtown Tampa isn't a ghost town, by any means, and the crowd at the NFL Experience area grew nicely as the afternoon went on. But the relatively light foot traffic is a clear difference from most years a few days before the game.

“The crowds are definitely a lot smaller around town,” said Jason Wakefield, a Chiefs fan who flew in from Kansas City with his wife Tara. “There are a lot more of the hometown team's fans than there would be normally. Last year, you saw a lot of San Francisco and Kansas City team areas and I don’t see a lot of that this year.”

The Wakefields were in Miami a year ago to watch the Chiefs beat the 49ers, but only Jason had a ticket for the game. This year, they'll both be inside Raymond James Stadium, rooting for a repeat. They'll be with just 22,000 others — including 7,500 health care workers — permitted inside as a result of social distancing mandates.

According to TicketIQ, the average list price to see the Super Bowl in person has been trending down recently and is sitting at $8,310. Still, there are just under 1,700 tickets available on the secondary market, with the cheapest costing $5,290.

The Smiths have been Ravens season ticket holders for 21 years and have made a father-son tradition of traveling to the Super Bowl, mostly just to hang out in the host city and enjoy some bonding.

They wouldn't let the coronavirus pandemic stop them this time around, either. About a month ago, 71-year-old Paul asked his son if he still wanted to go to Tampa, and the 31-year-old Montgomery was ready to roll.

“We’ve been reading that the airplanes are safe because of the air circulation,” the elder Smith said. “We wore two masks on the flight. You’re taking your chances no matter where you are, but if you do it smartly, I think you’re OK.”

They won't be attending the game this year, but instead will find a spot to watch together. And then Paul will start planning for next year's Super Bowl trip to Los Angeles.

“I think hardcore football fans like to go where the action is,” he said. “Even if you don’t go to the game, you still feel like you’re part of it.”

Megan Bishop and her boyfriend David Bregg are from Hastings, Michigan, and root for the Detroit Lions — but have a home in Tampa and also pull for the Buccaneers. The couple does a lot of traveling and planned their trip a year ago, before the pandemic began.

“I think they’re doing what they need to do,” the 41-year-old Bishop said of Tampa. "It’s going to help them out and they’re going to do their best they can with what they have to work with right now. Kind of a rough year for everybody.

“We’re used to the protocols now. We’ve been flying and we wear masks and keep our sanitizer with us. You’ve got to live.”