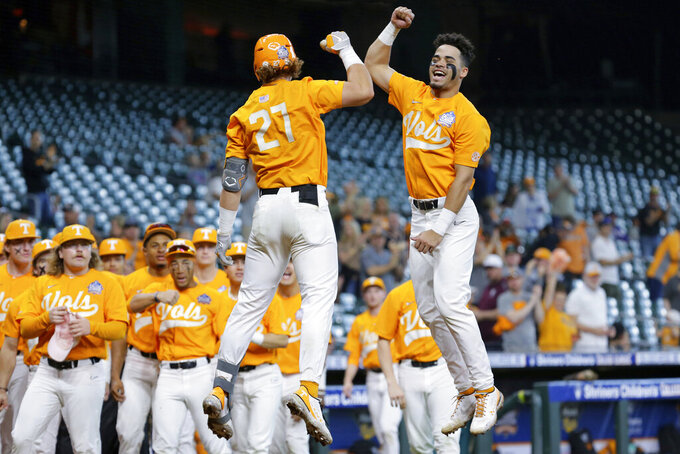 FILE - Tennessee's Jordan Beck (27) and Jorel Ortega, right, jump in celebration of Beck's home run against Oklahoma during an NCAA baseball game on Sunday, March 6, 2022, in Houston. After finishing one of the most dominant runs in Southeastern Conference history, Tennessee was named the No. 1 overall seed in the NCAA baseball tournament Monday, May 30, 2022. (AP Photo/Michael Wyke, File)

Matchups for the NCAA baseball super regionals were set Monday night after No. 2 national seed Stanford, No. 3 Oregon State, No. 8 East Carolina and eight other teams won regionals.

The best-of-three super regionals begin Friday and Saturday and will determine the field for the College World Series in Omaha, Nebraska, beginning June 17.

Stanford will play in a third straight super regional after coming from two runs down in the ninth inning to post a 4-3 walk-off win over Texas State. Drew Bowser and Tommy Troy hit back-to-back homers to tie it, and freshman pinch-hitter Trevor Haskins singled in the winning run.

Matthew Gretler hit a tiebreaking homer for Oregon State in the seventh inning, and No. 1 starter Cooper Hjerpe pitched the last two innings in his first relief appearance to secure a 7-6 victory over Vanderbilt.

“I felt good, and I told them if you need me, I’m ready,” said Hjerpe, who was working on two days' rest after throwing 100 pitches over 6 2/3 innings Friday.

Auburn won a regional on its home field for the first time since 1999, beating UCLA 11-4 in the completion of a game suspended Sunday night because of rain.

Cameron Masterman's tiebreaking homer in the eighth inning sent Louisville to an 11-9 victory over Michigan and into the super regionals for the seventh time since 2013.

Southern Mississippi is back in the super regionals for the first time since 2009 after taking the lead in the ninth on a sacrifice fly to beat LSU 8-7.

Gage Gillian and Davis Palermo combined to pitch 5 1/3 innings of one-hit shutout relief to help send North Carolina to a third straight super regional with a 7-3 win over VCU.

Peyton Graham homered during a four-run eighth inning that erased a two-run deficit and Oklahoma beat Florida 5-4 to return to supers for the first time since 2013.

Connecticut held off Maryland 11-8 and became the first current Big East team since St. John's in 2012 to win a regional.

Arkansas' Hagen Smith escaped a bases-loaded jam with his team up two runs in the eighth, and the Razorbacks knocked off No. 7 Oklahoma State 7-3 to reach a fourth straight super regional. The Hogs held down an OSU offense that scored 10, 12, 29 and 14 runs in its previous four games.

Auburn became the first team in SEC history to score at least 50 runs in its first three tournament games. The Tigers outscored their opponents 51-18 and hit 12 doubles and 11 homers.

“Our offense was the No. 1 key. No. 2 was our three starting pitchers," coach Butch Thompson said. "It’s nice when you’re at this stage and you play your best baseball of the year, and I thought we did that.”

A MOUNTAIN TOO HIGH?

East Carolina is in its third straight super regional and looking to reach its first College World Series. The Pirates have played in the tournament 31 times, most of any NCAA team that's never advanced to Omaha.

The Pirates are 1-12 in their six super-regional appearances, and they mustered a combined two runs over four games in the previous two.

Dan McDonnell has been using an unusual coaching ploy to motivate his Louisville team. Instead of talking baseball with his players, he talks hockey.

The tournament coincides with the NHL postseason, and McDonnell preaches to his players about competing with the same intensity as a hockey team in a Game 7 situation.

It must have worked. The Cardinals fought off elimination three times on their home field. After they wrapped up an 11-9 win over Michigan on Monday, McDonnell came out of the dugout carrying a hockey jersey.

“It’s a Lamar Jackson hockey jersey,” he said, referring to the Baltimore Ravens quarterback who played at Louisville. “I am not sure where we got it, but it’s pretty cool.”