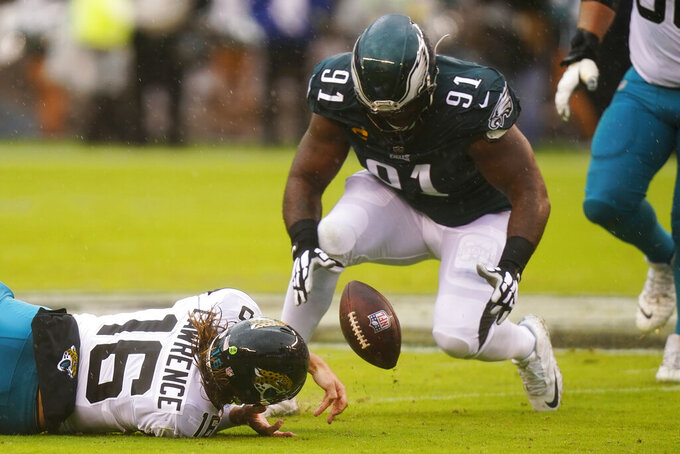 Jacksonville Jaguars' Trevor Lawrence fumbles the ball and Philadelphia Eagles' Fletcher Cox recovers it during the first half of an NFL football game Sunday, Oct. 2, 2022, in Philadelphia. (AP Photo/Chris Szagola)

OPENING LINE: Jaguars by 7, according to FanDuel SportsBook.

AGAINST THE SPREAD: Houston 2-2; Jacksonville 2-2.

TURNOVER DIFFERENTIAL: Texans plus-1; Jaguars plus-3.

TEXANS PLAYER TO WATCH: Few receivers have caused more headaches for the Jaguars than Brandin Cooks. He’s 6-0 against Jacksonville, catching 34 passes for 701 yards and five touchdowns in those games. He first beat the Jags with New Orleans in 2016 and then knocked them out of the playoffs with New England in 2018. He’s also been a part of Houston’s sweeps the past two years.

JAGUARS PLAYER TO WATCH: QB Trevor Lawrence hopes to bounce back from the worst performance of his life, a five-turnover outing at Philadelphia that included four lost fumbles and an interception. The Jaguars, not coincidentally, are 2-0 this season when Lawrence plays turnover-free football and 0-2 when he doesn’t.

KEY MATCHUP: Texans rookie Dameon Pierce ran for 131 yards and a touchdown last week against the Chargers and now faces a defense that gave up 210 yards and four touchdowns rushing at the Eagles. Miles Sanders gouged Jacksonville for 134 yards and two scores.

SERIES NOTES: The Texans have won eight straight in the series, as well as 14 of the past 16 meetings and 19 of 23 since 2010. It’s Houston’s longest winning streak in franchise history against any opponent. It’s especially odd considering Jacksonville has been favored in half of those eight games. Six of them have been decided by at least 13 points, and Houston has outscored Jacksonville 203-101 during the winning streak.

STATS AND STUFF: Texans QB Davis Mills has seven TD passes, one interception and a 106.7 rating in his past three games against AFC South teams. ... Pierce leads all rookies in yards from scrimmage (356) and rushing yards (313). ... Houston has three former Jaguars on its roster: G A.J. Cann, WR Phillip Dorsett and RB Dare Ogunbowale. Two assistants also spent time in Jacksonville: offensive line coach George Warhop and safeties coach Joe Danna. ... Jaguars WR Christian Kirk is one of three players, along with Philadelphia’s A.J. Brown and Buffalo’s Stefon Diggs, with at least 60 yards receiving in each of the first four weeks of the season. ... Lawrence has played three consecutive home games without an interception. He has four TD passes, no picks and a 101.6 rating in his past three division games. ... WR Marvin Jones looks to start a new receptions streak after having his end at 117 games last week.

FANTASY TIP: Cooks is a slam-dunk start for the Texans considering his career success against Jacksonville. Pierce probably, too, although the Jaguars were stout against the run the first three weeks of the season. Jaguars RB James Robinson and WR Christian Kirk are locks to start. Jacksonville’s defense should be considered a sleeper pick.