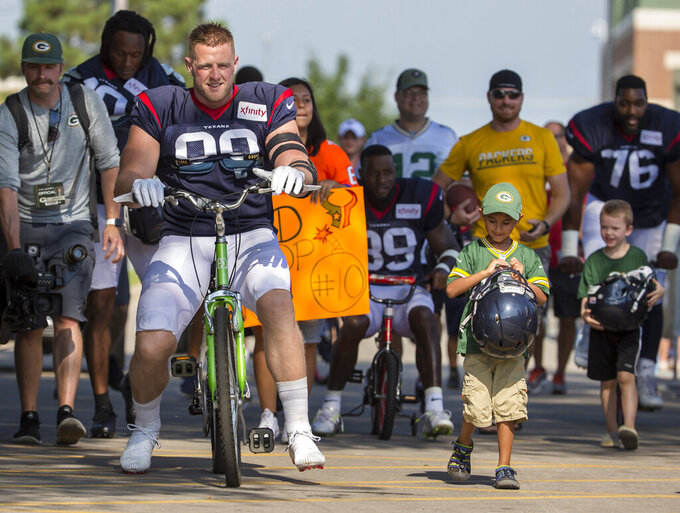 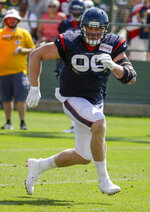 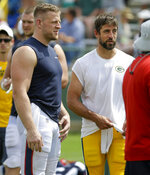 GREEN BAY, Wis. (AP) — J.J. Watt remembers standing outside the Packers' practice field as a kid, watching Brett Favre through the holes of the chain-link fence. He dreamed of one day being on the other side.

That dream became a reality — sort of — on Monday, as the Packers welcomed Watt and the Texans to Green Bay for the first of two joint practices before the teams meet in their preseason opener Thursday night.

"I'm very grateful for the reception and the way that they treat me here," said Watt, a Wisconsin native. "The amount of love and support that they've shown me ... it's pretty cool. I literally dreamt about this as a kid."

Watt's dream, however, did not include a broken bicycle seat and a groin injury.

Since the late 1950s, Packers players have ridden children's bikes to practice during training camp while kids run alongside holding the players' helmets. It's a spectacle Watt witnessed as a kid and finally participated in on Monday.

"It was pretty awesome until I broke the bike," he said.

Watt, a graduate of Pewaukee High School, about 130 miles south of Green Bay, hopped on the bike of 5-year-old Biraj Sadhu.

"He had a (Aaron) Rodgers jersey on, which is fine," Watt said. "I respect it. I support loyalty."

After a few pedal churns through the Lambeau Field parking lot, the seat snapped.

"The bike that I was using was not equipped for a 290-pound man, and the seat broke off," he said. "I've purchased a new bike for the boy. I apologize for that."

Watt received another bike — a much larger one — from teammate DeAndre Hopkins and rode the rest of the way to the practice field.

The Texans and Packers started on separate fields and then converged for a few 1-on-1 and 7-on-7 drills and faced off in a full-team scrimmage.

"I doubt that they'll let me out there," he said. "But regardless, it's going to be cool to go out in Lambeau Field and step on the grass and see the fans and just to live that moment. Like I've said all along, it was a dream of mine as a kid, so it's going to be pretty cool whether I'm playing or not."

About an hour and 20 minutes into practice, Houston cornerback Lonnie Johnson Jr. drilled Green Bay rookie tight end Jace Sternberger on a pass over the middle, causing Sternberger's helmet to pop off. Johnson then followed with a taunt and little dance, prompting several players to jaw at each other.

"I can't speak for them. ... I just know what I saw out there, and that particular play, that's not what we want to be about," Packers coach Matt LaFleur said.

LaFleur said he and O'Brien discussed the play and then O'Brien kicked Johnson out of practice.

"It's not a big deal. It's just a play that developed over there and it was time for Lonnie to head to the showers," O'Brien said.

The two teams will practice together again Tuesday.

NOTES: Monday was also a homecoming for Houston rookie OT Max Scharping. The Texans drafted the Green Bay native in the second round out of Northern Illinois. "I think this has to be a surreal experience for him and I'm glad he gets to experience it," Watt said of Scharping. "I hope he has tons of people here for this and tons of people here for the game because as a rookie, I don't even know if he knows how special this is and how moments like this you really hold onto and cherish." ... Packers K Mason Crosby (calf) took his first kicks of training camp. ... Green Bay CB Kevin King and RBs Jamaal Williams and Aaron Jones remain sidelined with hamstring injuries. RB Tra Carson received first-team reps in the backfield on Monday.