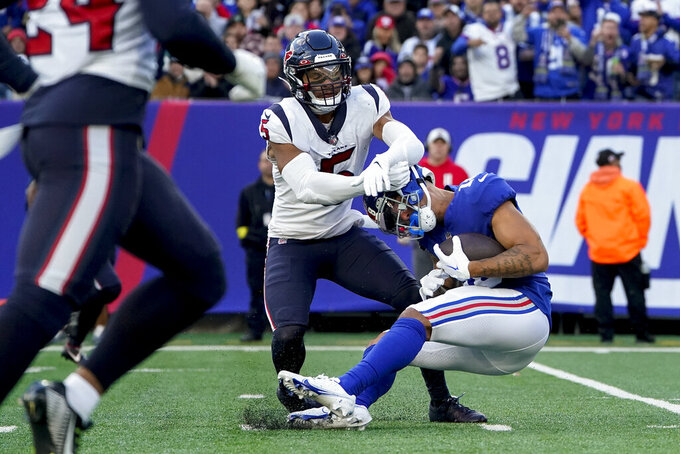 HOUSTON (AP) — The Houston Texans made it to the red zone six times against the New York Giants. They scored one touchdown on those drives.

That played a major role in Houston's fourth consecutive loss, a recurring theme during a lackluster offensive performance in Sunday's 24-16 setback. It was particularly glaring in the fourth quarter, when two turnovers inside the red zone helped New York hold on for the win.

Houston trailed by 11 and had a first down at the 9-yard line on the first play of the fourth after a 46-yard catch and run by Jordan Akins.

Rookie running back Dameon Pierce lost a yard on first down before fumbling on the next play. The Giants recovered, but couldn’t cash in on the error and had to punt it back.

The Texans (1-7-1) moved the ball well on the ensuing drive and appeared to have some momentum after a 19-yard touchdown catch by Brandin Cooks with 10 minutes remaining.

But the score was wiped out by a holding call on rookie lineman Kenyon Green, and Davis Mills was intercepted in the end zone on the next play.

“You can’t turn it over, it’s kind of simple as that,” coach Lovie Smith said. “Those turnovers were really big ... got to score more points than that. We had the opportunity. We were down in the red zone quite a few times. Got to be able to get it in.”

Sunday was Houston’s fourth loss this season by eight points or fewer, leaving Smith searching for ways to get his team to finish games.

Despite his fumble, Pierce’s play continues to be one of the only positive things on this dreadful team. Pierce had 94 yards rushing to give him 772 this season, which ranks fifth in the NFL.

“Stuff happens, that’s all I’m going to say,” Smith said of his fumble. “I’m definitely not going to criticize Dameon Pierce knowing what he’s been doing for our team. ... More of us need to play as well as Dameon has played throughout this year.”

The Texans have started eight rookies at different times this season and have gotten solid play from many of them. But three first-year players each made a costly mistake Sunday.

Pierce’s fumble in the red zone and Green’s holding call that negated a touchdown kept Houston scoreless on two consecutive possessions in the fourth quarter.

On defense, the Texans were down 7-3 in the third quarter when rookie safety Jalen Pitre missed a tackle that allowed Darius Slayton to turn a short gain into a 54-yard touchdown pass that helped the Giants pad the lead.

“When you deal with young players, there’s going to be moments like that,” Smith said. “You want the moments to be just less and less each week and hopefully now that we’re in the second half of the season that that will be the case.”

Akins led the team with three receptions for a season-high 72 yards.

Mills continues to struggle with turnovers, and he was unable to help the team finish drives when the Texans had multiple chances to score Sunday. In his second season, Mills has played so poorly that Smith has been repeatedly questioned about the quarterback's job security.

Smith is standing behind Mills despite his shaky play.

“He gives us our best chance to win," Smith said.

The Texans didn’t report any injuries from Sunday’s game.

191 – The Texans allowed New York to rush for 191 yards. It’s the fifth time this season Houston has allowed more than 160 yards rushing and the team ranks last in the NFL by allowing 181.8 yards rushing a game.

The Texans must clean up their mistakes, limit their turnovers and shore up their run defense if they hope to end their skid against the Commanders, who have won three of four after opening the season 1-4.