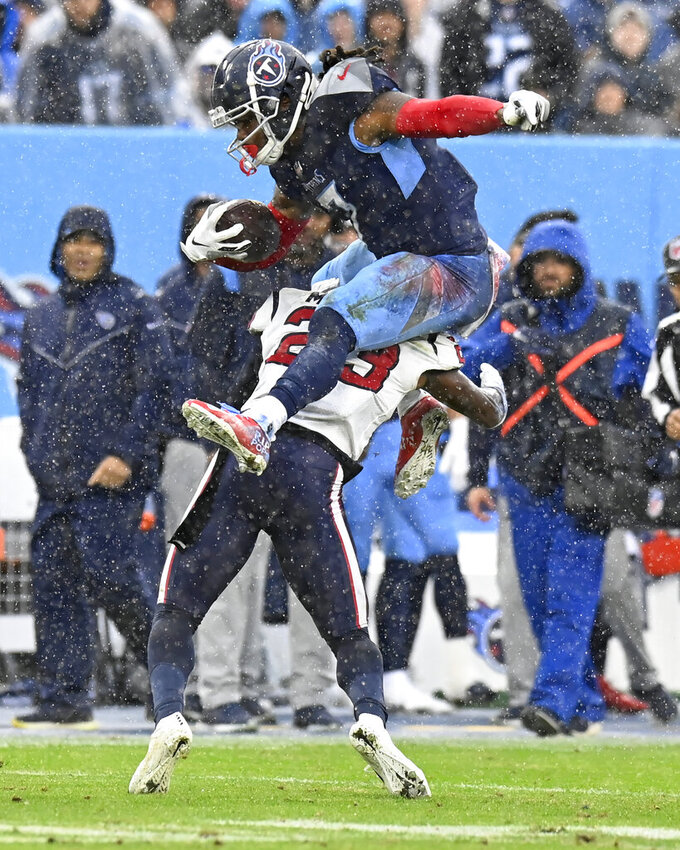 NASHVILLE, Tenn. (AP) — David Culley relished a big win a couple of hours from his Tennessee hometown with his brother and sister watching.

Just not enough for the first-year Texans coach to hand out game balls.

“We ain’t won enough ballgames to get any game balls," said Culley, a native of Sparta who played at Vanderbilt.

The Texans snapped the NFL's longest active skid by beating the Titans 22-13 to end the league's longest winning streak on a wet and rainy Sunday. The Texans (2-8) came in having lost eight straight since winning their season opener and hadn't scored a TD on the road since Sept. 19.

Houston's victory also marks the latest win in a season by a team with the worst record over the team with the best record in the same conference since the 1970 merger. Cincinnati's win over Pittsburgh in Week 7 of the 1979 season had been the previous such win, according to Elias Sports Bureau.

Desmond King had two of the Texans' four interceptions that tied a franchise record — three in the fourth quarter to snuff out the Titans' attempted rally. Houston turned those and a muffed punt into 13 points. The Texans also had two sacks.

“It’s just huge to get this thing rolling," Houston linebacker Kamu Grugier-Hill said. "It’s been tough. It’s been super tough. To come out here and get a big win on the road against probably one of the best teams in the AFC, that’s huge. So, we’re excited.”

The AFC-leading Titans (8-3) snapped their six-game winning streak with their first loss since Oct. 3. That came to the then-winless New York Jets, and the Texans hadn't won since the season opener. The Texans also left defensive lineman Jonathan Greenard with his seven sacks in seven games back in Houston with an injured foot.

Tennessee outgained Houston 420-190. But the Titans couldn't overcome their mistakes on a day where their injury list grew even longer with wide receiver A.J. Brown knocked out of the game in the third quarter with an injured chest.

Titans coach Mike Vrabel said, "Our offense certainly was its own worst enemy.”

Tennessee already declared six out for this game, including three starters, and also put linebacker Bud Dupree on injured reserve. Starting cornerback Jackrabbit Jenkins was a game-time scratch with a chest injury.

The Texans, fresh coming off their bye, took a 3-0 lead on their opening drive and never trailed again. Texans linebacker Grugier-Hill picked off Tannehill's pass and returned it 82 yards to the Titans 6 at the end of the first quarter.

Tennessee held the Texans to a second field goal by Ka’imi Fairbairn for a 6-0 lead.

Taylor capped a 76-yard drive scrambling 7 yards to the end zone where he flipped over Titans safety Amani Hooker for the TD. It was Houston’s first TD on the road since Sept. 19 at Cleveland. But Fairbairn’s extra point was wide left in heavy rain.

“To see your quarterback do that especially, I kind of went ‘Aw, shoot, just come down in one piece,’” Texans running back Rex Burkhead said.

Tennessee tried to score just before halftime. But Tannehill was flagged for intentional grounding with 4 seconds left with no timeouts remaining.

A muffed punt summed up the Titans' day. After finally forcing the Texans to punt, Titans returner Chester Rogers tried to turn away from the ball after a Texans defender ran past him only to have the ball hit his right heel. Trevon Smith recovered before a big Texans' celebration in the end zone.

Tannehill tried to start the comeback with an 18-yard TD pass to rookie Dez Fitzpatrick with 2:24 left in the third. Anthony Firkser recovered a fumble in the end zone to pull the Titans within 19-13 with 7:47 left.

The Texans now have strung together consecutive games forcing five turnovers apiece for the first time in franchise history. Houston had nine all last season and has 19 takeaways this season. The Texans improved to 27-1 all time with a turnover margin of plus-3 or better, including 8-0 against the Titans.

Houston last had four interceptions in a game Oct. 1, 2017 — against the Titans.

King played nine games for Tennessee last season. He got his first two interceptions this season at his former teammate's expense. King said he knew Tannehill had a bit of a weakness when dropping back from watching film and playing with him last season.

The Texans held the Titans without a sack for the first time since Week 15 of the 2020 season. Tennessee came into this game with 27 sacks. It was the first time Houston had not allowed a sack since Week 11 of last season against New England.

Titans wide receiver Marcus Johnson, who had a 100-yard receiving game last week, was ruled out after hurting his right hamstring late in the first quarter. Cornerback Chris Jackson hurt a foot, and outside linebacker Ola Adeniyi returned after hurting his hamstring. Defensive lineman Teair Tart went down late.

Titans visit the New England Patriots next Sunday in their final game before the bye.