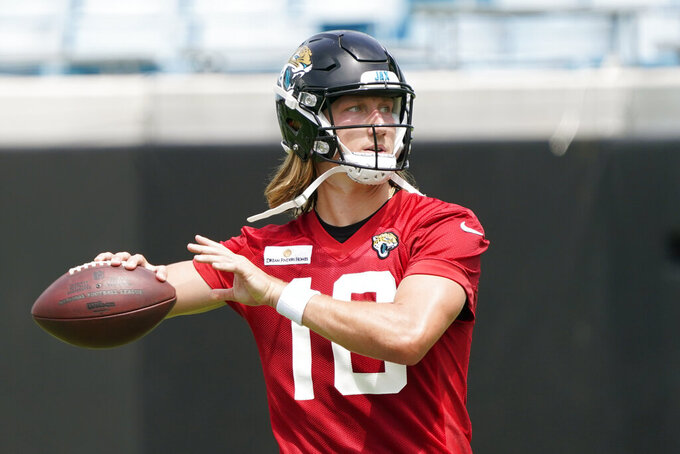 JACKSONVILLE, Fla. (AP) — Marvin Jones had a smile on his face and a pep in his step as the Jacksonville Jaguars went through their first organized team activity Monday.

The veteran receiver may have been more relieved than anyone in the building for a fresh start. A new head coach. A mostly new staff. A new outlook all around, really.

“When you like coming to work, good things happen,” Jones told The Associated Press following practice. “I’ll just leave it at that.”

The Jaguars are “healing” from one of the most tumultuous coaching tenures in NFL history. The Urban Meyer experiment lasted 11 months and might end up including as many lawsuits as wins (two). Meyer screamed at assistants, had run-ins with players and seemed to alienate nearly everyone around him while his college approach proved downright laughable in a locker room filled with grown men and millionaires.

“I do believe there has to be some kind of healing with the situation and everything that transpired last year because it’s just there’s a lack of trust that was broken,” new Jaguars coach Doug Pederson said. “For me, it’s about gaining the trust back and they have to see it through me. They have to see the transparency, the honesty."

Meyer’s time in Jacksonville was filled with lies. He told owner Shad Khan and everyone else he spent a year studying the league and then barely knew NFL stars, let alone his own players. He so often confused names that the team’s public relations staff started keeping a roster of the opposing team atop every speaking podium.

When a video was released in October showing Meyer on camera at an Ohio bar with a woman dancing near his lap, he initially told staffers the woman and others were merely trying to coax him onto the dance floor. A second video seemed to prove otherwise, and Meyer ended up making two public apologies.

There were plenty of other absurd moments during Meyer’s tenure: the coach insisted repeatedly that 2021 No. 1 draft pick Trevor Lawrence and Gardner Minshew were vying for the starting quarterback job despite there being no chance Lawrence would open the season as a backup; Meyer blamed running backs coach Bernie Parmelee for benching starter James Robinson when, in fact, it was Meyer who demanded that Robinson be taken out of a game following a fumble; Meyer also denied getting into a heated argument with Jones that prompted the player to leave practice.

“You have to flush it," Jones said. “Not just in football, but in any business. You just flush it and you keep going as usual and be a professional. I think everybody has done that. Everybody has taken their time off to do whatever they needed to do mentally, and I think we’re on a good track.”

“I think the biggest thing in a team is just trusting each other,” Lawrence said. “Trusting in the guys in the locker room but also the staff. That’s something – clearly – we didn’t have a lot of last year. I think our locker room did a great job last year of staying together.

“It’s cool to see (Pederson) make that a priority, and he knows and understands that that is definitely something that we have to make sure we have in this building.”

Pederson, who was hired in early February after a lengthy coaching search, has no specific plans for helping the team recover from Meyer’s debacle other than being open and honest about everything and trying to promote better communication between players and coaches. He has addressed the “need to heal” in team meetings and feels as if “guys have really embraced it and are doing well.”

“It can’t get worse than what we’ve been through here,” pass rusher Josh Allen said. “As much as he wants to heal us, we still live with that.”

Allen and some teammates were so rattled by what transpired last season that they left Jacksonville for months to regroup. They have been reenergized since returning to Peterson's more authentic approach, one that could pay dividends for a franchise that has four wins in the past two seasons.

“You can see right off the bat what type of person he is," Jones said. "We’re all grown; you can judge character quickly in this league. I think that’s what we have. It’s straightforward. These guys are treating everybody like how they’re supposed to be treated, like professionals, and I think that resonates within the whole building. This is definitely a great start.”