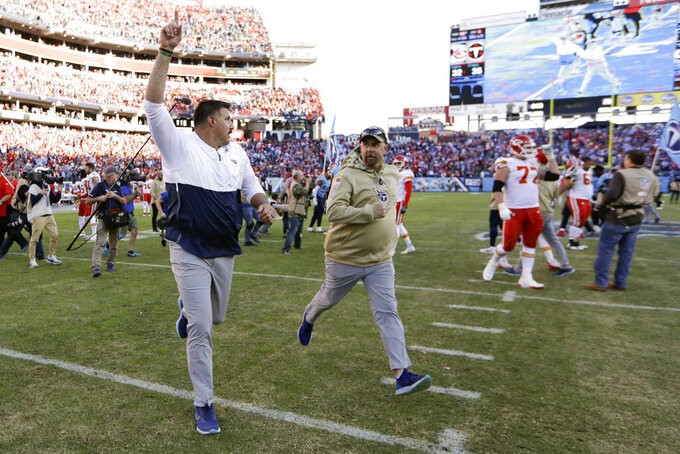 NASHVILLE, Tenn. (AP) — The Tennessee Titans believe their bye with the much-needed time off helped them heal for the final six games on the schedule.

How much remains to be seen. Coach Mike Vrabel didn’t tip his hand Monday except to say he expected two of four Titans to test themselves when they practiced. But Tennessee doesn’t have to share an injury report until Wednesday.

Tight end Delanie Walker and defensive tackle Jurrell Casey both think they’re feeling good enough that there’s a chance each might play Sunday when the Titans (5-5) host Jacksonville. Casey has missed the past two games with an injured shoulder, while Walker hasn’t played since five snaps Oct. 20 against the Chargers.

“Been gone way too long,” Casey said. “Never in my life would I have I have thought I’d miss this many games in my career. But Lord got things up His sleeve. Just ready to get back out there.”

Walker talked to reporters while wearing a brace on his left knee to help him avoid aggravating the right ankle that has kept him out of the past two games. That’s the same ankle he broke in the 2018 season opener. Walker said he wouldn’t be wearing the brace in a game, and he likes how he’s feeling right now. The test will be how he feels after practicing.

“Just by the things I’ve been doing, it feels good, so I think it's going in the right direction,” Walker said. “Again, I'm a tough guy, and I feel like at this point it's where I'm able to play. But again we just have to see.”

The Titans also played without linebacker Jayon Brown (groin) and wide receiver Corey Davis (hip) in their 35-32 win over Kansas City before their bye.

Tennessee is back at work with the AFC South bunched up, just a game out of first behind Indianapolis (6-4) and Houston (6-4) but just ahead of Jacksonville (4-6). Four of the final six outings are inside the division, including a trip to Indianapolis on Dec. 1. The Titans are playing the Texans twice in the final three weeks.

Vrabel calls it a great opportunity that’s no different than the Kentucky Derby when a hole opens up for a horse to take advantage.

“Or in this case, the team will take advantage of the opportunity,” Vrabel said. “So, all we can focus on right now is Jacksonville. We didn’t play the game how we wanted to play it last time down there, so we’ll have to do a much better job this week of preparing to continue to give ourselves opportunities.”

The Titans lost 20-7 in Jacksonville on Sept. 19 as part of a 2-4 start that led to the benching of Marcus Mariota. They went into the bye having won three of four with Ryan Tannehill, and Vrabel said the coaches spent a lot of time with the players last week looking at where they can improve in areas ranging from fundamentals and penalties to third downs.

Now it’s back to work after a bye week that came late in the season.

“Everybody’s a little bit refreshed, and that’s what we needed,” Walker said.