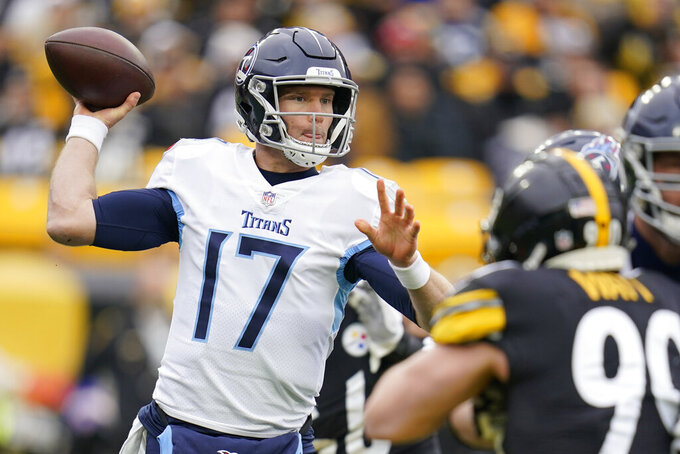 NASHVILLE, Tenn. (AP) — The Tennessee Titans' grip is slipping not only on a high seed in the AFC but also on the AFC South title that appeared wrapped up on Halloween.

Here comes the streaking San Francisco 49ers on a short week looking to improve their own wild-card hopes — or better — in the final Thursday night game of the NFL season.

The Titans (9-5) have no time to second-guess what might have been. Not with three games remaining needing a combination of either two of their own wins, two losses by Indianapolis or a combination of one each to wrap up their second straight division title.

Better yet, they just need a win after losing three of the past four, the most recent a 19-13 loss in Pittsburgh.

“The AFC it’s probably as tight as it’s ever been, at least since I’ve been in the league,” six-year Titans safety Kevin Byard said. “So we can’t be concerned about outside noise. We have to focus on what we have to do to get a W against a really talented 49ers team that’s been playing really well as of late.”

The 49ers (8-6) have played their way into position for the second wild-card berth in the NFC by winning five of their past six. They're two back of Arizona and the Rams (10-4) in the NFC West with three to play coming off a 31-13 rout of Atlanta.

“December football, you never know which play’s going to determine your season or that game and you’re trying to be perfect,” San Francisco quarterback Jimmy Garoppolo said. "We all are at this point, but you know, that’s why you’ve got to love it.”

Garoppolo has ended any talk about whether rookie Trey Lance would seize the starting QB role this season. Garoppolo has been extremely efficient since San Francisco’s shaky start to the season and has helped the Niners climb back into playoff position.

He has topped the 3,000-yards passing mark for the second season of his career, and his 107.4 rating the past eight weeks is second best only to Aaron Rodgers’ mark in that span. Niners coach Kyle Shanahan says Garoppolo hasn't changed much.

“I think we’ve gotten better around him throughout the year," Shanahan said. "I think we’ve gotten more continuity on the offense. I think that we’ve with the skill positions and tight ends they’ve gotten healthier and been out there more consistently than they were at the beginning of the year.”

The Titans have been downright stingy, especially on the ground. The Titans held Pittsburgh to 168 total yards last week, the fewest this franchise has given up since Sept. 9, 2010, also against the Steelers.

They rank second against the run after giving up 43 yards rushing combined over the past two games, the best two-game mark in franchise history. That tops the 50 yards allowed in November 1997 to Buffalo and Dallas. Tampa Bay posted the only better two-game rushing mark this season with 38 yards in October.

Both defenses will be tested by two of the NFL's best rushing offenses. The Titans come in fourth and the Niners seventh overall, but they've been even better over the past month even with two-time NFL rushing champ Derrick Henry on injured reserve for Tennessee.

The Titans have run for at least 200 yards in two of the past three games led by D'Onta Foreman and are averaging 169 yards over the past four games, which is third in the league behind Philadelphia (218.3) and Indianapolis (208.8).

The Niners rank fifth averaging 142.4 yards rushing between Weeks 11 and 15.

While Nick Bosa has been putting together a dominant season at defensive end for the Niners, he’s starting to get some help as well.

Bosa has sacks in six straight games giving him 15 on the season as he closes on Aldon Smith’s franchise record of 19 1/2 in 2012. But Arden Key has had at least a half-sack in six of the past seven games, Samson Ebukam has had at least a share of a sack in back-to-back weeks and Arik Armstead has provided consistent pressure.

The Titans already have used an NFL-high 87 players, most ever in a non-strike season, and now they will be without left tackle Taylor Lewan (back) and left guard Rodger Saffold, who didn't practice Wednesday and was placed on the reserve/COVID-19 list. This will be the fourth game Lewan has missed this season and the second straight for Saffold.

Cornerback Jackrabbit Jenkins (ankle) will play after missing three of the past four games along with defensive lineman Teair Tart (ankle) who missed four of the past five. The Titans could get some more help Thursday if they activate wide receiver A.J. Brown and defensive back Chris Jackson off injured reserve.