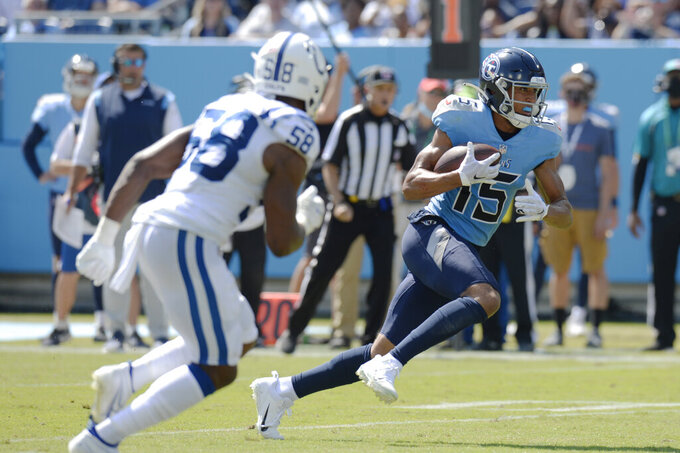 Tennessee Titans wide receiver Nick Westbrook-Ikhine (15) gets past Indianapolis Colts inside linebacker Bobby Okereke (58) to score a touchdown in the first half of an NFL football game Sunday, Sept. 26, 2021, in Nashville, Tenn. (AP Photo/Mark Zaleski)

NASHVILLE, Tenn. (AP) — The Tennessee Titans have had a hard time getting their two Pro Bowl wide receivers going at the same time.

Now they may not have either Sunday in starting a two-game road swing at the New York Jets.

Neither Brown nor Jones practiced Wednesday with both on the injury report with hamstrings. Jones, 32, was limited to nine games last season with a nagging hamstring injury.

So the Titans are ready to lean on the next man up, or receiver, as needed in this case.

“I’m not sure who’s going to end up trotting out there on Sunday, but confident in whoever it is," quarterback Ryan Tannehill said. "Had a ton of reps and confidence in those guys. And it’s been something we’ve done since I’ve been here, so excited about the guys we have that could possibly step up for us.”

Issues in training camp actually have the Titans (2-1) quite prepared for this situation along with a roster loaded with seven wide receivers. An eighth, Marcus Johnson, started practicing Wednesday for his return from injured reserve.

Coach Mike Vrabel said the Titans try to insulate themselves everywhere for how player availability fluctuates through a season.

“And so hopefully, everybody that shows up for meetings and comes to practice can understand that they could potentially have a role in the game,” Vrabel said.

Jones missed three weeks of training camp after coming down on a foot awkwardly. Brown also practiced sporadically. That left plenty of work for the other wide receivers.

“Just take it like preseason, just how it was when those guys were out,” Rogers said. "You got to step up and make plays. So that’s definitely how I’m looking at it.”

Westbrook-Ikhine started last week and caught the first touchdown pass of his career. Rogers has as many catches and touchdowns (one) as Brown with an average of 12.9 yards per reception that's just off of what Brown has at 13.1 yards per catch.

Westbrook-Ikhine has size at 6-foot-2 and 211 pounds. He went undrafted out of Indiana in 2020, but earned his way onto the practice squad before being promoted to the roster on September 2020. He wound up playing in 14 games with one start and finished with three catches for 33 yards.

His secret? Know the playbook and know where everyone has to be, especially when a new play is put in.

“You can plug in place wherever it needs to be,” Westbrook-Ikhine said. "And, you know, I kind of had that to me pretty much throughout my career in college. I was the same way, to being able to know the whole playbook and make yourself valuable.”

Vrabel said that isn't as easy as it sounds.

"Nick’s been able to handle that, play multiple positions, play in the kicking game, come up with some big catches in opportune times,” Vrabel said.