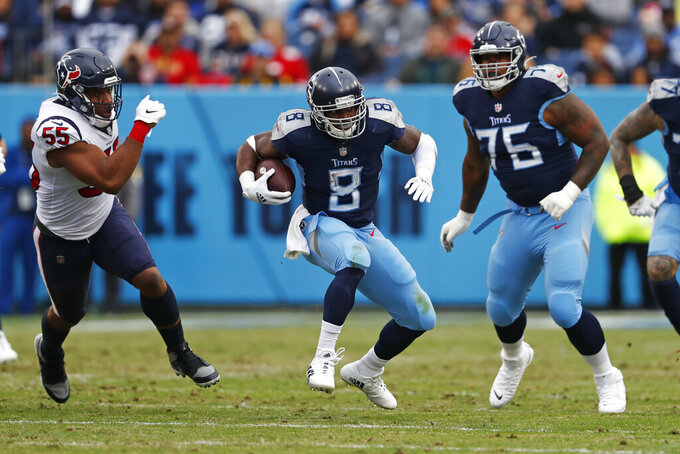 The Titans signed running back Dontrell Hilliard from the practice squad to replace Peterson. They also signed defensive back Buster Skrine and brought back outside linebacker john Simon.

They also placed defensive back Chris Jackson (foot) and wide receiver Marcus Johnson on injured reserve. Johnson hurt his right hamstring in the first quarter in last week's loss to the Texans, a week after he caught five passes for a season-high 100 yards receiving.

Along with an injury to 2020 Pro Bowl receiver A.J. Brown, that has left the Titans (8-3) thin at wide receiver before visiting New England (7-4) on Sunday. That's why the Titans signed receivers Golden Tate and Austin Mack to the practice squad along with defensive lineman Kevin Strong and running back Rodney Smith.

Fullback Khari Blasingame also was cleared to return to practice, though he remains on injured reserve.

Peterson signed originally to the Titans practice squad Nov. 2 to help replace Derrick Henry and was promoted to the active roster two days before a win in Los Angeles over the Rams. Peterson started two games and had 27 carries for 82 yards and a 3.0-yard average per rushing attempt and one touchdown run.

His longest run of 16 yards came last week against Houston.

Hillard has played in two games for Tennessee. He's coming off his best game yet with seven carries for 35 yards and eight catches for 47 yards against Houston.

Skrine has played 152 games over 11 seasons with Cleveland, the Jets, Chicago and most recently San Francisco earlier this season. He was a fifth-round pick out of Chattanooga in 2011.

The Titans added a bunch of experience in Nashville native Tate. He has played 160 games in 11 seasons with Seattle, Detroit, Philadelphia and the Giants. He has 695 receptions, 8,278 yards receiving and 46 TDs. He has posted three 1,000-yard receiving seasons, and he's also averaged 10.1 yards on 111 punt returns.

Mack played in 11 games with a start with the New York Giants last season. Smith played nine games the past two seasons with Carolina after going undrafted out of Minnesota. He set a school record with 5,441 career all-purpose yards, including 4,122 yards rushing.