Torrey Pines goes to Saturday finish to get off NFL Sunday 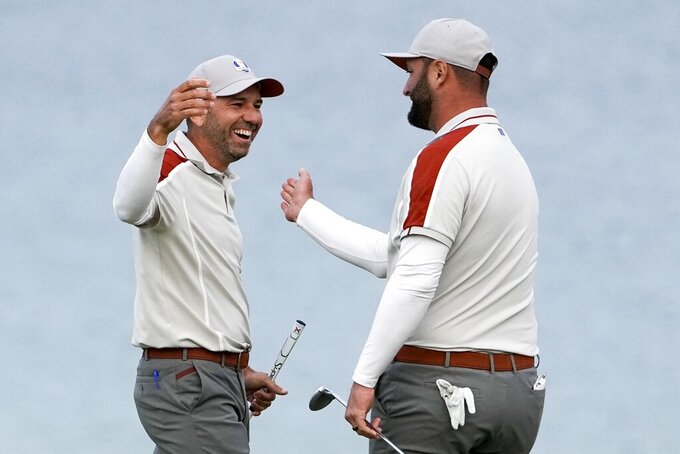 The Farmers Insurance Open at Torrey Pines had an ideal spot on the West Coast Swing as the weekend between the NFL conference championship games and the Super Bowl. That changed when the NFL added a game to its regular season.

That led the tour to adapt by starting the tournament a day earlier, on Wednesday, and giving CBS a prime-time finish for most of the country on Saturday, a day ahead of the NFC and AFC title games.

The Farmers Insurance Open now will be Jan. 26-29.

The last PGA Tour scheduled for a Saturday finish was the 1996 Phoenix Open, the year the Super Bowl was played in Tempe, Arizona.

Now the Waste Management Phoenix Open embraces Super Bowl weekend, even when the NFL championship is played down the road from the TPC Scottsdale.

“We appreciate Farmers Insurance’s collaboration and innovative thinking with this shift in competition days,” said Tyler Dennis, president of the PGA Tour. ”The PGA Tour's first network event of 2022 wrapping up on Saturday, combined with football games the following day, will create an action-packed weekend for sports fans."

There still will be golf at Torrey on Sunday.

The diversity-focused Advocates Pro Golf Association Tour will be expanded to 36 holes. The first round will be on the North Course on Saturday, while the final round will move to the South Course on Sunday and be televised live on Golf Channel.

It will be the first time an APGA event is shown on live TV.

One of the more important conversations Steve Stricker had with Paul Azinger was about creating a good environment. Azinger, who reshaped Ryder Cup qualifying for the Americans and won as captain in 2008, told him it was important to find the mood that works best.

Stricker is more about preparation than inspiration. In fact, too much inspiration can lead to too much pressure.

Whatever he’s doing, it’s working. Stricker was at the helm of the Presidents Cup team in 2017 that played so well it almost clinched the cup before the final session. And then he got the best players to deliver top performances in a record win over Europe at the Ryder Cup.

If the Americans cared about winning, they would consider bringing him back for Italy in 2023.

“It was a very similar position as far as the dominance goes,” Jordan Spieth said in comparing Stricker’s two times as U.S. captain.

The Ryder Cup is the only team event that doesn’t have repeat captains.

Jack Nicklaus and Fred Couples, Gary Player and Nick Price, they all were captain for successive years in the Presidents Cup. Juli Inkster did it three times in a row at the Solheim Cup (going 2-1) and Catriona Matthew just won her second straight.

At the amateur level, the Walker Cup and Curtis Cup have a history of captains serving consecutive times.

The Ryder Cup hasn’t had that happen since Bernhard Gallacher in 1995. Davis Love III did it twice in three Ryder Cups.

“I don’t think it’s going to happen. It’s mapped out and there’s guys in positions to be the next captains,” Stricker said. “It was an unbelievable experience, don’t get me wrong. I’m glad it’s over.”

Olympic gold medalist Xander Schauffele and Collin Morikawa, who narrowly missed out on the bronze, are headed back to Japan next month.

Schauffele, Morikawa and Masters champion Hideki Matsuyama of Japan are among five players who have committed to play the Zozo Championship on Oct. 21-24 at Accordia Golf Narashino outside Tokyo.

The PGA Tour wanted to get out word as further affirmation the tournament is taking place.

The Zozo Championship returns to Japan — defending champion Patrick Cantlay has not indicated if he will be going — while the CJ Cup returns to a different golf club in Las Vegas.

The difficulty of Japan is that the PGA Tour has consecutive tournaments in Las Vegas before going to Japan, and the following week it is in Bermuda.

Matsuyama was always going to play in his native country. He was in the final group at the Olympics and missed out on the 7-for-1 playoff for the bronze medal.

Schauffele returning was not a surprise, either.

“Everybody knows of the close affinity that my family and I have with Japan due to our heritage and the fact that my grandparents live over there,” he said. “Winning the gold medal in Tokyo in July has only reinforced my love for Japan and I look forward to coming back.”

The Zozo Championship has a 78-man field and a $9.95 million purse.

Dustin Johnson and Sergio Garcia came away with individual honors in the ultimate team event at the Ryder Cup. They were selected to receive the inaugural Nicklaus-Jacklin Award.

The award is for players who best embody the spirit of when Jack Nicklaus conceded a short putt to Tony Jacklin to conclude the 1969 Ryder Cup in a tie (the Americans retained the cup as defending champions).

Johnson teamed with Collin Morikawa three times and Xander Schauffele once and then won his singles match to go 5-0, the first American to win all five matches since Larry Nelson in 1979.

Garcia won three matches with Jon Rahm and lost in singles to Bryson DeChambeau. He was selected as much for his teamwork and sportsmanship, two attributes identified by sponsor Aon, for encouraging Rory McIlroy after the four-time major champion was 0-3 in team play.

“I love the Ryder Cup,” Garcia said. “We all know about the beautiful moment that happened more than 50 years ago between Nicklaus and Jacklin. I’m proud to be the first to win this award and thankful to Aon. I enjoyed this week and I thought we played with good energy, which is important to show the young players that you can play with respect and have fun, even in defeat. I love my team. I’m so proud of all of them.”

Rocket Mortgage is extending its PGA Tour title sponsorship in Detroit through 2027. Cam Davis of Australia won this year's Rocket Mortgage Classic at Detroit Golf Club. ... Steve Stricker and Padraig Harrington next duel as players when Harrington makes his PGA Tour Champions debut next week at Timuquana Country Club in Jacksonville, Florida. ... The Americans didn't lose a session in the Ryder Cup for the first time since 1967. ... Ian Poulter joined Colin Montgomerie as the only players to never lose in singles at the Ryder Cup in at least seven appearances.

The Ryder Cup featured the top seven players in the world ranking. They combined for a 21-3-4 record at Whistling Straits.

“If you want to have these glorious moments, you’ve got to put your head out there, and sometimes it doesn’t go right. You get your head knocked off. That’s just the reality of sport.” — European captain Padraig Harrington after a 19-9 loss in the Ryder Cup.