Trubisky, Steelers searching for spark after loss to Pats 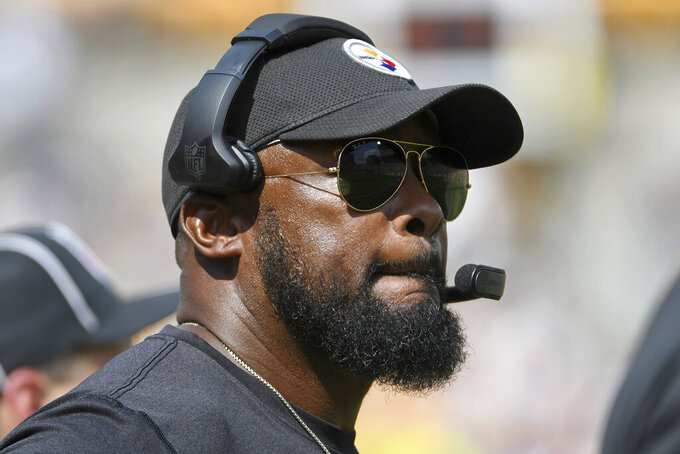 Pittsburgh Steelers head coach Mike Tomlin stands on the sideline during the first half of an NFL football game against the New England Patriots in Pittsburgh, Sunday, Sept. 18, 2022. (AP Photo/Phil Pavely)

PITTSBURGH (AP) — The Pittsburgh Steelers are looking for a spark.

The offense struggled for the second consecutive week, while the defense held firm at times without star outside linebacker T.J. Watt, but couldn’t do enough to prevent New England from closing out a 17-14 win on Sunday.

Mitch Trubisky threw for 168 yards with a touchdown and an interception for the Steelers, whose offense sputtered for long stretches.

Pittsburgh managed just three first-half points from Chris Boswell’s 36-yard field goal, but two other drives were stalled by punts and another ended with Trubisky’s first interception as a Steeler. The Steelers drove inside the Patriots 15-yard line on their first-half scoring drive, but a sack brought out Boswell for the kick.

The Steelers’ offense has scored one touchdown in each of the last two weeks, including a thrilling and bizarre season-opening victory at Cincinnati.

Boswell kicked a 52-yard field goal in the third quarter on Sunday and Trubisky answered a Patriots touchdown when he hit Pat Freiermuth for a 7-yard score on the first play of the fourth quarter. That pulled the Steelers within three points following a 2-point conversion to Diontae Johnson and briefly quieted the chants for rookie quarterback Kenny Pickett to enter the game.

“You just block it out and continue to play football,” Trubisky said of the chants for his backup.

Still, the Steelers twice went three-and-out when they got the ball back in the fourth quarter with a chance to tie or take the lead. The 9-play, 75-yard series that ended with Freiermuth’s touchdown featured no-huddle and tempo, but the Steelers failed to recapture the magic down the stretch.

“We had momentum and everybody was flowing on offense,” Johnson said. “We were making plays and driving the ball down the field. Everybody was executing and we fed off that.”

Pittsburgh managed just 243 yards of total offense. Trubisky didn’t make many deep throws downfield or over the middle and the Steelers struggled to establish a ground game for the second straight week as Najee Harris led the team with 49 yards rushing.

“Really, it just comes down to better execution, no matter how you put it,” Harris said. “I have to make more plays, the line has to do better, the receivers, the quarterback. ... We have to find a way to execute better.”

The Steelers’ defense had seven sacks last week against Cincinnati, but it didn’t have any on Sunday against New England. Pittsburgh couldn’t sustain much pressure on Patriots quarterback Mac Jones while playing without Watt, who is sidelined indefinitely with a left pectoral injury.

All-Pro safety Minkah Fitzpatrick picked off Jones in the first quarter. But Jones gave the Patriots a halftime lead with a 44-yard touchdown pass, as Nelson Agholor beat cornerback Ahkello Witherspoon on a one-on-one play near the front pylon.

In the third quarter, cornerback Cam Sutton dropped a pass that hit him squarely in the hands. The Steelers forced a punt on the drive, but ex-Patriot Gunner Olszewski muffed the ensuing kick, which set up a 2-yard touchdown run by Damien Harris and gave New England an 11-point lead it didn’t relinquish.

Harris ran for 71 yards, most of them coming on a clock-chewing drive in the fourth quarter, as the Patriots held the ball for the final 6:33.

“We didn’t stop the run enough,” defensive tackle Cam Heyward said. “We didn’t put them in enough situations where they had to throw the ball. If we were ever going to get to their offensive line, it had to start with stopping the run first.”