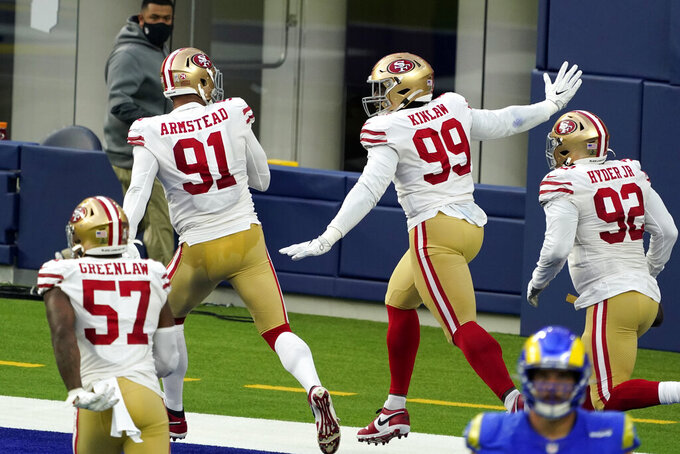 San Francisco 49ers defensive tackle Javon Kinlaw (99) celebrates in the end zone after returning an interception for a touchdown during the second half of an NFL football game Sunday, Nov. 29, 2020, in Inglewood, Calif. (AP Photo/Alex Gallardo)

INGLEWOOD, Calif. (AP) — The San Francisco 49ers have no idea where they'll be living, practicing or playing next week, thanks to new coronavirus restrictions issued in Santa Clara County while the team was on its flight to Los Angeles.

With the latest wave of turmoil in a season rocked by injuries and disappointing results, all the defending NFC champions could control Sunday was the game in front of them — and the Niners have been in absolute control of their rivalry with the Rams for two full seasons.

Robbie Gould made a 42-yard field goal as time expired, and the 49ers snapped their three-game losing streak with a 23-20 victory over Los Angeles that completed a sweep of their season series for the second straight year.

Nick Mullens passed for 253 yards and led two late scoring drives in his first victory as a starter since September for the Niners (5-6), who stoked their flickering playoff hopes by becoming the first team to beat the Rams (7-4) at new SoFi Stadium. San Francisco forced four turnovers and committed three of its own, but eked out enough points to beat the Rams' top-ranked defense.

“It was the exact type of game that we were hoping for,” Niners coach Kyle Shanahan said. "We (knew) we had to run the ball and do all those things we wanted to make it a grimy-type game. When we have those three turnovers on offense, it’s very tough to win that type of game, and that’s what made it so close. But when the defense ends up getting four turnovers, then it gives you a chance.”

The 49ers were taken aback by the county's decision to essentially ban practices and games in the county for the next three weeks, with Shanahan calling it “extremely disappointing.” Players and coaches fielded worried phone calls from their families on the plane.

“We were in LA, and we had a game ahead of us,” said Richard Sherman, who had an interception and led the Niners with seven tackles in his first game since Week 1. “That’s all we could focus on. When we get off the field, we’ll focus on where we’re going to go and what we’re going to do. We focused on the Rams.”

Los Angeles went ahead early in the fourth quarter on rookie Cam Akers’ TD run set up by his own 61-yard run, but Gould hit a 44-yard field goal with 3:11 left before San Francisco stopped a clunky drive by the Rams near midfield with 2:10 to play.

Fullback Kyle Juszczyk then converted a fourth-and-1 with 28 seconds to play during a 56-yard drive to set up Gould, who nailed his third field goal.

Rookie defensive lineman Javon Kinlaw returned an interception 27 yards for a touchdown for San Francisco's defense, which largely dominated with big plays. The Niners forced Malcolm Brown's first fumble since 2017 before getting two interceptions and a fumble from Jared Goff, who has committed 10 turnovers in four games.

“Our quarterback has got to take better care of the football,” Rams coach Sean McVay said in a rare public criticism of Goff, who is tied for second in the NFL with 14 giveaways.

“We have to take better care of the football, or else I am going to keep coming up here and saying the same thing week in and week out,” McVay added. “They deserve their respect, but in a lot of respects for us, it was simple execution. Guys didn’t make plays in crunch time. We need guys to step up in certain spots.”

Aaron Donald forced a fumble and Troy Hill returned it 20 yards for a touchdown late in the third quarter, but the Rams' top-ranked defense couldn't keep the Niners out of field goal range late. Los Angeles allowed only 135 yards in the second half, but Gould hit three field goals.

Goff passed for 198 yards for the Rams, who slipped out of first place in the division after managing just 34 yards on their final two drives.

“The defense played lights-out all day,” said Rams receiver Cooper Kupp, who had just two catches. “What they were able to do to the Niners was incredible. As an offense, we have to capitalize on those upswings. We have to do a better job.”

San Francisco's hopes of a second straight Super Bowl trip have been severely damaged by injuries, but several key players returned to boost this impressive win.

49ers: Nickel back Jamar Taylor left the field on a cart late in the second quarter with an apparent left knee injury. ... CB Ken Webster also left on the cart in the fourth quarter.

49ers: Host the Buffalo Bills somewhere on Dec. 7, but probably not at Levi's Stadium.