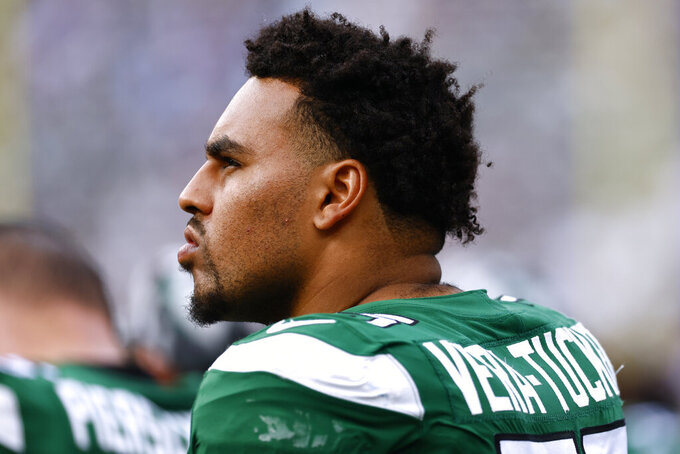 New York Jets guard Alijah Vera-Tucker (75) looks on during an NFL pre-season football game against the New York Giants, Aug. 27, 2022, in East Rutherford, N.J. Vera-Tucker had an impressive rookie season for the Jets last year as their left guard. The first-round draft pick moved to left guard this season because of injuries on the offensive line, and then made his first start at left tackle last Sunday. Vera-Tucker's versatility has earned the ultimate respect of his teammates, with one declaring he'll one day join the Jets' Ring of Honor. (AP Photo/Rich Schultz)

FLORHAM PARK, N.J. (AP) — Alijah Vera-Tucker has already made his way through three-fifths of the offensive line just 20 games into his NFL career with the New York Jets.

He was a left guard as a rookie, opened this season at right guard and then started at left tackle last Sunday at Pittsburgh.

And he had strong performances at all three spots.

“It’s phenomenal,” center Connor McGovern said. “Not only does he do it and goes out and he’s selfless and willing to do whatever it takes to win a game and help his team out, he does it an extremely high level.”

According to Sportradar, Vera-Tucker is one of 42 players to start at three or more offensive line positions in his first 20 NFL games among players to debut since 2006. He’s the only Jets player to accomplish the feat, and one of four first-round draft picks to do so during that span, joining Chicago’s Gabe Carimi, Cleveland’s Cameron Erving and New Orleans’ Andrus Peat.

“That’s just God blessing me being an athletic big man,” said the 6-foot-5, 308-pound lineman. “It was definitely an experience being out there again, not playing tackle the last two years. But it was fun, it was cool and I enjoyed it.”

Vera-Tucker, who last played left tackle at Southern California in 2020, was solid last year at left guard, but moved to the right side this season after the Jets signed Laken Tomlinson in March. Things went well at the new position for Vera-Tucker, but injuries along the offensive line forced New York to shuffle things.

Right tackle Mekhi Becton went down with a knee injury in training camp and was lost for the season. Left tackle George Fant moved to the right side after the Jets signed Duane Brown. But Brown hurt his shoulder before the season, forcing Fant back to left tackle.

Meanwhile, the Jets had quietly been working after practice for a few weeks with Vera-Tucker to play left tackle — in case of an emergency.

“It’s a lot to process for anybody, just flipping it, especially from inside to outside,” Vera-Tucker said. “With that just comes a lot of studying, and just had to do a little bit more extra work last week and that was pretty much it.”

Fant went down with a knee injury and was placed on injured reserve, and Vera-Tucker got the surprise start at left tackle against the Steelers.

“It speaks volumes to him, one as an athlete, and two of his mindset,” coach Robert Saleh said. “He doesn’t flinch. I can’t say enough about him. His selflessness to be able to go out and do that, a lot of guys would be worried about how they would look on tape.

“But he’s just team-first, not even worried about what he will put on tape, because in his mind he is going to go dominate, and to his credit, he did it.”

Vera-Tucker didn't allow a sack or a quarterback hit in the game.

“Truly unique, man,” said Brown, who has played left tackle throughout his 15 NFL seasons. “Just really impressive. I talked to him quite a bit, just letting him know how impressive it is. I think he knows that, but he's a humble guy.

“You go on the road, into a hostile environment ... I mean, he graded out like he has been playing left tackle the whole time.”

So, is there any position on the line Vera-Tucker can't play?

“Me being as confident as I am, I would like to say no,” the 2021 first-round pick said with a smile. “I haven't played right tackle or center, so hopefully I can cross those off later on in the future.”

It's uncertain where Vera-Tucker will play this Sunday at home against AFC East rival Miami.

Brown returned to practice, giving the Jets 21 days to decide whether to activate him. It could come as soon as this week, but New York wants to see how he's feeling physically. If not, there's a good chance Vera-Tucker will be back at left tackle for at least another game.

“It’s impressive to see somebody who, in my opinion, is going to be a Pro Bowler at right guard and be willing to go switch positions and then goes and plays at a Pro Bowl level somewhere else," McGovern said. "So for him to be able to go play right guard and then left tackle is pretty special.

"He earned my respect incredibly fast last year. I just definitely hold him in the highest regard. He'll be up there in the (Jets') Ring of Honor one day, for sure.”