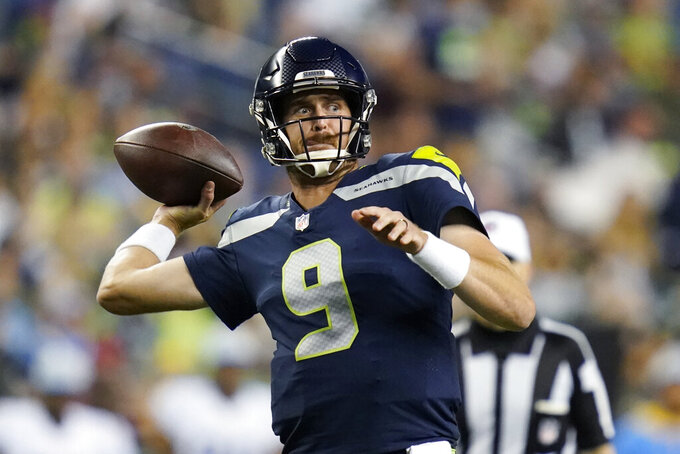 Seattle Seahawks quarterback Sean Mannion throws a pass against the Los Angeles Chargers during the second half of an NFL football preseason game Saturday, Aug. 28, 2021, in Seattle. (AP Photo/Elaine Thompson)

The Vikings also signed quarterback Sean Mannion to the practice squad for another backup option to Kirk Cousins, after he was released by Seattle this week. Mannion was the No. 2 quarterback behind Cousins for Minnesota in each of the last two seasons.

He joined the team for practice on Thursday after his redeye flight landed at 5:30 a.m.

“It’s been almost 30 hours straight, so I’m getting a little tired, but I think some coffee will cure that,” said Mannion, who has begun his seventh NFL season.

Familiarity with the offense was an obvious selling point for the Vikings, who let Mannion depart as a free agent earlier this year.

“There’s very few guys I’ve been around as bright as him," offensive coordinator Klint Kubiak said. “The way he sees the game, the way he communicates with the coaches, he’s an extra coach on the field on top of being a heck of a player.”

Berry was cut by the Steelers this week, after six seasons with the team. He was tied for first in franchise history in punts landed inside the 20-yard line (154). The native of Australia averaged a career-best 45.8 yards per punt in 11 games in 2020.

Colquitt spent two years with the Vikings, after being picked up right before the regular season in 2019. The 11-year veteran ranked 20th in the league in gross average and 29th in net average among punters with a qualifying amount of attempts.