Vikings hoping to get healthy again at cornerback 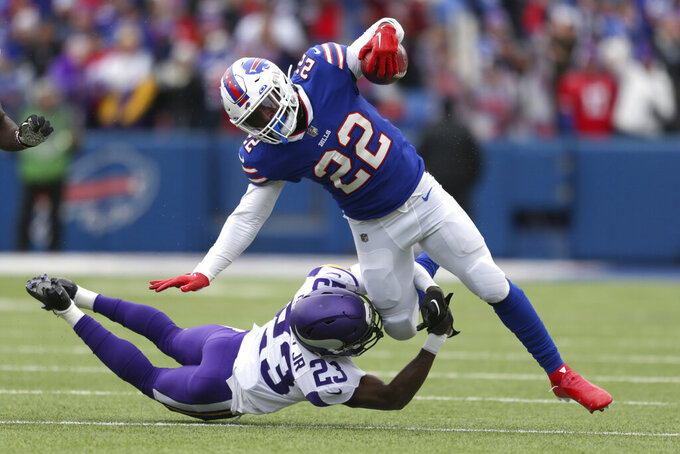 EAGAN, Minn. (AP) — For three straight weeks, the Minnesota Vikings have started a different cornerback because of injuries.

Last week against New England, Duke Shelley was pressed into action when Andrew Booth Jr. was held out with a knee injury. Booth started one game in place of fellow rookie Akayleb Evans but then got hurt. And Evans got his shot when Cameron Dantzler Sr. went on injured reserve.

Booth will miss the rest of the season after having surgery to repair a torn meniscus, but Minnesota is hoping the turnover at the position opposite veteran Patrick Peterson is mostly over. Dantzler, who started the first eight games, is eligible to return next week after recovering from an ankle injury.

That means either Shelley or Evans could see playing time Sunday at home against the New York Jets.

The revolving door at cornerback has made an impact. Despite a 9-2 record and five-game lead in the NFC North, Minnesota has allowed the most passing yards in the NFL (276.1 per game). The Vikings have allowed more than 300 passing yards in each of the three games without Dantzler.

“The medical team has been really trying to progress him off to the side and make sure he’s doing whatever he can to simulate different kinds of practice movements and in-game movements,” Minnesota coach Kevin O’Connell said of Dantzler. “So, when we do activate him, the hope is that it’ll be an activation and he’ll be able to be out there with us the following Sunday.”

Evans, a fourth-round rookie from Missouri, has missed the past two games while in the concussion protocol.

“He’s in kind of the final phase of it, which is full-speed practice and then just making sure he gets a full day of work in, a padded practice, and see how he recovers and if we can move forward with him,” O’Connell said.

If Evans can't play, Shelley is ready to face the Jets and quarterback Mike White, who threw for 315 yards, three touchdowns and no interceptions last week in a 31-10 win over Chicago.

“I definitely embrace every matchup,” Shelley said. “I like me versus anybody. It doesn’t matter who it is. I’m going to bet on myself anytime. That’s why everybody was wondering why I went up to press on third downs. I want the ball to come my way. I want to make the play. So, it’s kind of my mentality.”

Booth, a second-round pick out of Clemson, played defensive snaps in just two games before his season ended. O'Connell said the rookie opted for a full repair of his meniscus, which is better for his long-term health.

With Booth out, Minnesota has received little production from its top two draft picks. Safety Lewis Cine, a first-round pick, played in just three games and had two defensive snaps before suffering a broken leg.

“You hate to see it because you see some of them guys, talented guys, especially young guys, you don’t want them guys to lose their confidence, things like that,” Shelley said. “Try to stay behind them and uplift them as much as you can, let them know that you’re here for them and everything’s going to be all right.”