With vote of confidence, Williams ready to lead Bengals line 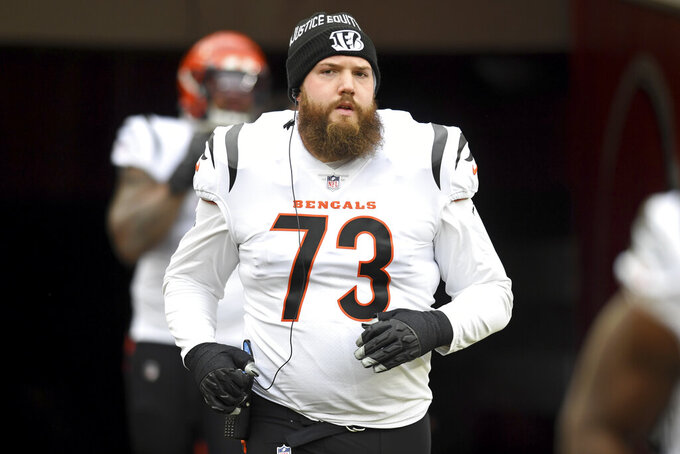 FILE - Cincinnati Bengals offensive tackle Jonah Williams (73) runs onto the field in the second half of an NFL football game against the Cleveland Browns, Sunday, Jan. 9, 2022, in Cleveland. The Cincinnati Bengals retooled their porous offensive line after watching Joe Burrow get sacked an astounding 70 times in 20 games last season, including seven times in their losing effort in the Super Bowl. One of the bright spots in that mess was left tackle Jonah Williams, who was graded out by Pro Football Focus as the Bengals' best lineman last season. (AP Photo/Nick Cammett, File)

CINCINNATI (AP) — The Cincinnati Bengals retooled their porous offensive line after watching Joe Burrow get sacked an astounding 70 times in 20 games last season, including seven times in their losing effort in the Super Bowl.

One of the bright spots in that mess was left tackle Jonah Williams, who was graded out by Pro Football Focus as the Bengals' best lineman last season. The team's first-round draft pick in 2019, Williams missed his rookie season but has worked to solidify his future here.

The 24-year-old Alabama product was rewarded by the Bengals, who picked up the fifth-year option on his contract, which will pay him $12.6 million during the 2023 season.

"I appreciate having at least two more seasons here to really work with my teammates and the guys we brought in," said Williams, who is participating in voluntary offseason workouts. "It just allows me to focus on this year.”

“We all kind of know it’s a business and the team wants to get the best product on the field possible, so I think everyone is just going to approach this season as a competition, even against the new guys that came in," Williams said. "I think that’s going to kind of lift all of us up competing at every position.”

He said the offensive line is well aware that it was a weak spot, especially in the postseason.

“We were in a position where we were fighting to make the playoffs towards the end of the year, and then suddenly we beat Kansas City at home and we were division champs, and we were making the playoffs,” Williams said. “From there we were just stacking our chips trying to keep on going. As you do that, the level of competition rises and everyone is bringing their best. I don’t think we did enough to step up when we needed to."

The Bengals gained some respect in 2021 after going a combined 6-25-1 in coach Zac Taylor's first two seasons.

They finished 10-7 in the regular season and won the division as the traditional AFC North powers faded in December. They got through without major injuries and widespread COVID-19 issues as was the case in 2020.

Field goals by rookie Evan McPherson decided five of Cincinnati's games, including a 52-yarder as time expired for a 19-16 win over Tennessee in the divisional round and a 31-yarder to give the Bengals a 27-24 win over Kansas City in the AFC championship game.

They played their way into a Super Bowl for the first time in 33 years, but lost 23-20 to the Los Angeles Rams.

“I take losses pretty hard,” defensive tackle DJ Reader said Tuesday. “Especially when you get that close. I didn’t really talk to that many people. My mom knows how I am. I didn’t talk to my agent for a while. I didn’t talk to my mom for about a week. Everybody just hung out for a little bit, then I get back and everything is all good.”

Reader said he was heartened to see the organization make the sort of offseason moves designed to address very specific needs, such as getting a new crop of defensive backs in the recent NFL draft.

“It shows they care about winning,” Reader said “We came in and took care of business last year, made them believe in us a little bit more. They are just going to go out there and keep getting players for us to win and guys that can do a good job. It means a lot to see them pour into it and shows how important it is to them as well.”

By W.g. Ramirez 29 minutes ago
By Noah Trister 7 hrs ago
By Kyle Hightower 8 hrs ago
By Steve Reed 11 hrs ago
By Joe Reedy 13 hrs ago