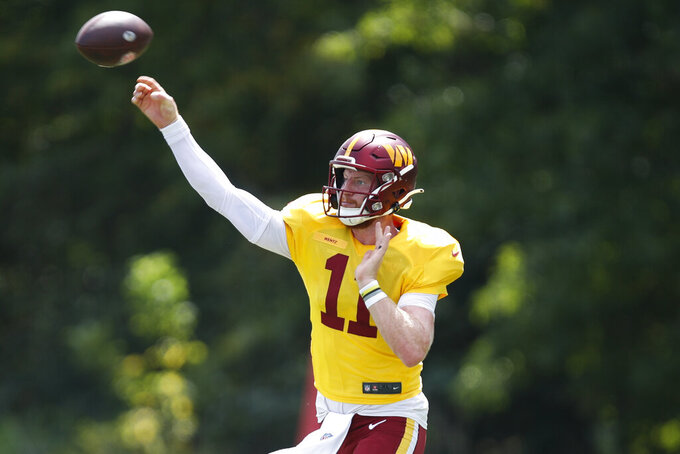 ASHBURN, Va. (AP) — On the eve of Carson Wentz’s third training camp with three different teams in as many years, Ron Rivera welcomed the new Washington Commanders quarterback with a handshake and a message even an NFL veteran may have needed to hear.

Once wanted by Philadelphia as the second overall draft pick before eventually falling out of favor with the Eagles and with Indianapolis a year later, Wentz no longer seemed like a hot commodity after the Colts fell apart late last season and missed the playoffs.

But Rivera and Washington’s front office targeted the 29-year-old in hopes of solving the organization’s seemingly endless search for a starting QB. The Commanders are now Wentz’s team, with all the pluses and minuses that come with job security and belief from coaches to the pressure and expectations to reach the postseason.

Wentz the leader already has emerged, from gathering receivers for private workouts to escape room outings he treated like a game situation. The physical talent that made him a highly touted prospect out of North Dakota State is still there, though some of the mistakes he made with Philadelphia and Indianapolis left him available.

Now with Washington, Wentz is eager to move past his journey from one NFC East rival to another and start over.

“I feel confident in myself,” he said. “I feel belief in myself from the people around me, which means a lot.”

The Colts believed in Wentz when they acquired him, and that faded to the point that team owner Jim Irsay called the move a “mistake” and blamed inconsistency in the passing games for causing them major problems. The same sort of belief evaporated in Philadelphia after Wentz threw a league-high 15 interceptions in 2020 and was replaced as the starter by Jalen Hurts.

Wentz revived his career with Indianapolis last season, throwing 27 touchdown passes and just seven picks, though a horrendous loss to Jacksonville in Week 18 that included two turnovers ended the Colts' season — and his tenure with them — on a sour note.

Rivera and the Commanders saw the good in Wentz: a strong arm that could expand the offense’s reach downfield, a prototypical 6-foot-5 frame fit for the modern game and a seasoned leader who could take over a team that has had eight different quarterbacks over the past three years.

The hope is not to change Wentz but to get the most out of what he does well and try to limit some of the errors that derailed him at times.

Practices and preseason action showed the good and the bad of Wentz. He completed 16 of 22 passes and led strong drives in limited exhibition game time, though at times in camp some inaccuracies stuck out.

Interceptions by teammates in 11-on-11 drills in August don’t count, and after a particularly rough practice day, Rivera put an emphasis on what Wentz and the other QBs on the roster could do to learn from their errors.

“It’s about decision-making at that point,” Rivera said. “As you go through the film with him, it is listening to the explanation of: ‘Why this read? Why that decision? Hey, did you see this? What got you to do that?’ That’s what it’s really about.”

Wentz already took command of the offense by gathering offensive playmakers for a bonding retreat and workouts in California before training camp. He learned plenty about his new teammates on and off the field, and back in the Washington area they learned plenty about Wentz's competitive nature, even during double dates to local escape rooms.

“It’s just like he’s on the field,” punter Tress Way said. “He’s adamant on breaking the record, no hints. I tried to keep it light, but we got out of the room every time. He’s still undefeated.”

A 10-7 record, especially given a weak schedule, would likely be enough to get Washington into the playoffs in Rivera's third season in charge. That also will require the defense bouncing back and the offensive line keeping Wentz upright.

But the onus is on Wentz to get the job done.

“I really like his aggressiveness,” top wide receiver Terry McLaurin said. “When he’s trying to give us chances down the field, I think that’s something that all of us, as an offense, know we want to improve on.”

Going into his seventh pro season, Wentz still has things to improve on. He seems to understand where those deficiencies are. Addressing them will go a long way toward determining whether the Commanders are playing in mid-January and, ultimately, if he’ll be back for a second season.

“I’m always trying to figure out, how can I get better?” Wentz said. “How can I look at myself first? Where can I get better? Where can I help the team be better? All of those things. And so, for me, it’s just coming in and distributing the ball to these guys and being efficient, being effective, being consistent.”

NOTES: Starting safety Kam Curl said he had surgery to repair a right thumb injury and hopes to play in the season opener Sunday against Jacksonville. Tight end Logan Thomas, who tore multiple ligaments in his left knee late last season, is still trying to figure out whether he'll play against the Jaguars or wait for Week 2 at Detroit. ... The Commanders named franchise sacks leader Ryan Kerrigan assistant defensive line coach. Kerrigan, who recently returned to Ashburn to announce his retirement, fills in after Jeff Zgonina was promoted to replaced fired D-line coach Sam Mills III.