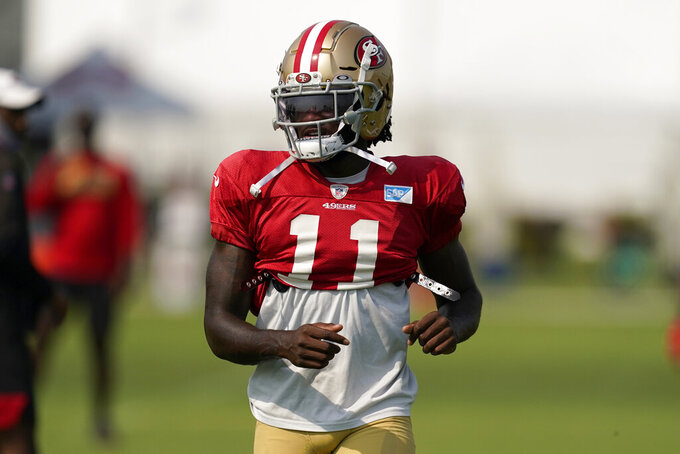 SANTA CLARA, Calif. (AP) — The San Francisco 49ers got one key defensive player back to practice in advance of the season opener but are still waiting to know the status of two of their key receivers.

Linebacker Fred Warner was taken off the reserve/COVID-19 list Wednesday and took part in practice ahead of Sunday’s opener against the Arizona Cardinals.

Receivers Deebo Samuel (foot) and Brandon Aiyuk (hamstring) didn’t take part in the open portion of practice and their status remains in doubt this week.

Warner was placed on the list on Aug. 31 and missed one week of practice. The list is used for players who either test positive for the coronavirus or have been in close contact with an infected person. Teams aren’t allowed to provide any additional details but coach Kyle Shanahan was happy to have the anchor in the middle of his defense back.

“Fred’s been as reliable a player as we’ve had,” Shanahan said. “It was great to get him back today. We were obviously a little nervous about that. He’s good to go and we’re grateful that he’s here.”

Warner was an emerging star on San Francisco’s defense last season when the Niners won 13 games in the regular season and went to the Super Bowl. He excels in coverage and against the run, as well as calling the defensive signals.

Warner had 118 tackles, seven tackles for loss, nine passes defensed, three sacks, three forced fumbles and an interception he returned for a touchdown against the Rams. Warner also had an interception in the Super Bowl loss to Kansas City.

The 49ers began preparations for the Cardinals without Samuel and Aiyuk. Samuel has been out since breaking his foot in June during informal offseason workouts with teammates. He was taken off the non-football injury list Saturday and still has a chance to return this week.

Samuel caught 57 passes for 802 yards and three TDs as a rookie last season and also made big contributions in the running game. He had 14 carries for 159 yards and three scores.

Aiyuk, one of the team’s first-round picks in April, injured his hamstring in practice on Aug. 23 and has been sidelined ever since. He was impressive early in training camp and was expected to play a key role this season.

If Samuel and Aiyuk can’t go, the other receivers on the roster are Kendrick Bourne, Trent Taylor, Dante Pettis and Richie James Jr. Kevin White also could be promoted from the practice squad.

Pettis did not play the final six games last year despite being healthy as he lost the confidence of Shanahan. He came back to camp with a better mindset and could have a bigger role this season.

After catching 17 passes during a four-game stretch late in his rookie season in 2018, Pettis had only 11 receptions all last season.

“We’re ready for any situation with the receivers. Whether Dante is going to play a lot, play a little. He’s probably in the same boat as about four other guys,” Shanahan said. “But what I can say is Dante is so much more prepared for the season than he was last year at this time. ... Dante was so prepared for camp, fought through camp, the tough days, and took a number of steps forward as a receiver.”

In other injury news, cornerback Jason Verrett didn’t practice because of a hamstring injury and center Ben Garland was limited with a sprained ankle.

NOTES: The 49ers practiced under skies with an orange glow because of fires in the area but the Air Quality Index remained under 100 and wasn’t a major issue. "I feel like I’m in the Book of Eli, it’s like an apocalyptic state out there, but surprisingly the air quality doesn’t seem as bad as it looks," Shanahan said. The team would halt outdoor practices if the AQI topped 200. ... The 49ers named seven captains for the season: QB Jimmy Garoppolo, TE George Kittle, OL Mike McGlinchey, OL Trent Williams, DL Arik Armstead, CB Richard Sherman and Warner.

By Dave Skretta just now
By Rob Maaddi 34 minutes ago
By Josh Dubow 2 hrs ago
By David Brandt 6 hrs ago
By Teresa M. Walker 6 hrs ago