Washington still has no name but bears higher expectations 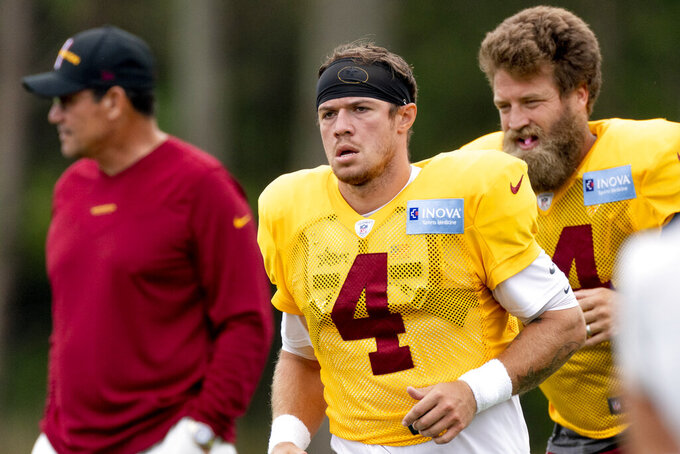 Washington Football Team quarterbacks Taylor Heinicke (4) and Ryan Fitzpatrick, right, warm up at the team's NFL football training camp practice in Ashburn, Va., Wednesday, Aug. 4, 2021. Also pictured is head coach Ron Rivera, left. Coming off winning the NFC East at 7-9 in Ron Rivera's first season as coach, Washington still doesn't have a new name but does have increased expectations. After bringing in 38-year-old “FitzMagic” quarterback Ryan Fitzpatrick to start, Washington is straddling the line between win now and build for the future, and a difficult schedule will test that balance. (AP Photo/Andrew Harnik)

ASHBURN, Va. (AP) — Before Washington gets a new name, Ron Rivera's team has one more chance to add another division title.

After winning the NFC East at 7-9 in Rivera's first year, Washington faces higher expectations in what should be the final season before a new moniker is unveiled. Ryan Fitzpatrick was signed to put a veteran quarterback in charge, and it might take a little “FitzMagic” to reach the playoffs again for an organization straddling the line between wanting to win now and building a sustainable contender for the first time in decades.

“If you have success and it’s premature and it builds this air about you, that’s not right: You get your butt kicked," Rivera said. “If for whatever reason we come out and say, ‘Well, we arrived, man, we got this,' then we’re not going to get better. We’re not going to go back and learn from the basics. We’re not going to understand what it takes to get back to where we need to be.”

With Fitzpatrick, top receiver Terry McLaurin and second-year back Antonio Gibson running the show on offense and a stacked defense led by reigning AP Defensive Rookie of the Year Chase Young and stalwart defensive tackles Jonathan Allen and Daron Payne, Washington should again be in the mix for first in the NFC East.

The defense that ranked second in the NFL last season added first-round pick Jamin Davis at linebacker and gets safety Landon Collins back from an torn Achilles tendon.

Even if there's some regression, the pass rush powered by Young and Montez Sweat is enough to give opposing QBs some fits and make defensive coordinator Jack Del Rio's unit one of the best in the league.

“I really try not to give ourselves a ceiling,” Young said. “We got everything on paper. But at the end of the day, it doesn’t matter. It’s what we put out on the field and being consistent and just going out there and having to do it every single day.”

Even more than consistency, Rivera is worried about his team's maturity. He expressed frustration early in training camp over Washington having one of the lowest rates of vaccinations among players and tried to hammer home the message that it could prove costly during the season.

A first-place schedule with games against Aaron Rodgers and the Packers, Tom Brady and the Buccaneers and the New Orleans Saints will test how ready Washington is to win now. Even with a young group, there's a belief in the front office that it's possible.

“We think we can win with these players, develop these guys, and we can have these guys here for a long time,” general manager Martin Mayhew said. “And that’s what the plan is.”

Fitzpatrick, now 38, is set to start for a ninth different team. He beat out surprise playoff performer Taylor Heinicke in a QB competition that was far more a coronation for Fitzpatrick than anything else, but it gave the well-traveled Harvard grad the opportunity to grow into Washington's leader right away.

“I want to be the guy that when we are in the fourth quarter or facing some adversity and people don’t know what to do, they can look at me," he said.

Young and Sweat spent time looking up league and franchise records for sacks and aren't afraid of the challenge of trying to chase them down. Washington used a first-round pick on a defensive lineman each year from 2017 to 2020 — Allen, Payne, Sweat and Young — so the building blocks are there to break a record or two.

“It’s about performance, not about potential,” Del Rio said. "There are a lot of teams with potential that don’t do a whole lot. So our focus is really on preparing for the year, coming in here in good shape, coming in here and understanding what we’re asking you to do up front, on the back end, how it all ties together and, really, we just want them to do their job and do it at the highest level possible.”

Washington already had a handful of local products, including Young, Allen and cornerback Kendall Fuller and added another in undrafted rookie running back Jaret Patterson, who impressed in camp to make the roster.

Another surprise was Chilean tight end Sammis Reyes, a converted basketball player who had never played football until this year. Reyes called Washington his “dream team” because his girlfriend's family in the area has become like his, and he did not want to play anywhere else.

“I’ve never had stability. I’ve never had any sense of community or family around me,” he said. “I finally felt like I was at home after looking for that for so many years.”

Reyes could become the first player from Chile to play in an NFL game.