What now? Steelers scrambling for answers after 1-2 start 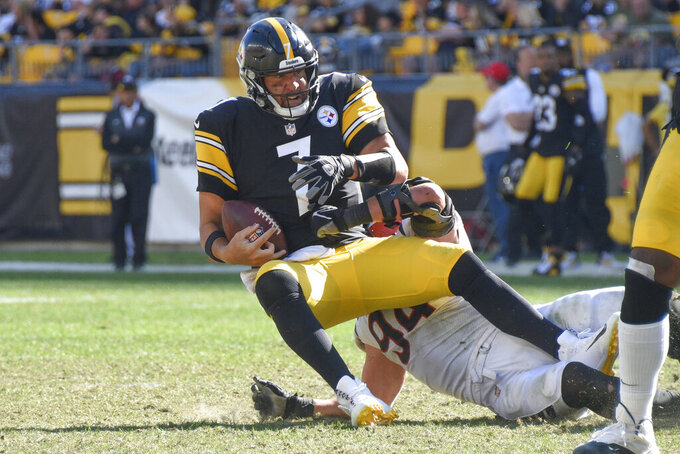 PITTSBURGH (AP) — The situation called for a gamble. Something risky. Something — anything really — to awaken the Pittsburgh offense and fend off the cascade of boos that followed every futile possession.

Instead, Ben Roethlisberger took the snap, turned immediately to his right, flipped the ball to running back Najee Harris and hoped for the best.

Harris needed 10 yards to extend the drive and any chance of a late comeback against Cincinnati on Sunday. The first-round draft pick didn't even get 1 yard. Hard to blame him. The moment he hauled in the 13th of his 14 receptions he was immediately swallowed up by a host of white-clad Bengals defenders.

Drive over. Game over. Any notion that what's ailing Pittsburgh's offense would be a quick fix is over, too.

Perhaps the most telling part of the entire fourth-quarter sequence that sealed a 24-10 loss to Cincinnati and dropped the Steelers to 1-2 is that the throw to Harris was the plan all along.

“We had fired all of our bullets at that juncture in terms of some of our play selection,” head coach Mike Tomlin said. “It just wasn’t a good enough play to get in there.”

Not by a long shot. Roethlisberger admitted afterward he probably should have tried to force something into the end zone with his team trailing by two touchdowns and time winding down. That he didn't is telling of both a lack of confidence in the line in front of him and the targets at his disposal not named Harris.

Roethlisberger, as he's done repeatedly throughout his career following a defeat, placed the blame on his shoulders. This time — unlike the previous week when he played relatively well in a loss to Las Vegas — his words rang true.

While there were dropped passes and a litany of penalties against Pittsburgh's retooled line, there were also instances when the 39-year-old Roethlisberger tried to summon the “Ben being Ben” magic that defined his play a decade ago.

The magic looks like it's gone, perhaps for good. Roethlisberger absorbed four sacks, three on plays when it appeared he had plenty of time to throw but hung on to the ball in hopes of a receiver getting open. Instead, he found himself pounded into the Heinz Field turf.

“Everything hurts,” Roethlisberger said with a wry grin.

Maybe his pride most of all. Roethlisberger returned for an 18th season knowing he would be playing behind a line far different than the one that allowed him to be sacked just 13 times in 15 games a year ago. He believed he could still play and the window for him to reach a fourth Super Bowl remained open.

Through three weeks, it certainly looks like it has slammed shut. Pittsburgh is 2-7 since starting 2020 with 11 straight wins. The Steelers are in last place in the AFC North and have Roethlisberger summoning the words of a player who sounds like he knows it's getting late early.

“There’s a little something called pride when you pay for the Pittsburgh Steelers, when you put black and gold on,” he said. “ You may not have the best day. Things may not be going your way. But you don’t quit, and you get back up and you fight.”

The question heading into a visit to Green Bay next week is, how much fight does he have left?

Not much of anything. The defense, playing without injured outside linebackers T.J. Watt and Alex Highsmith, failed to get a sack for the first time since 2016, snapping the team's NFL record of 75 straight games with at least one.

The offensive line. The running game remains a mess because Harris has little room to maneuver and without it, defenses can — and are — teeing off on Roethlisberger. The Steelers have allowed eight sacks through three weeks.

Harris. He touched the ball 28 times and accounted for 142 total yards. The 23-year-old runs with admirable ferocity and his 14 receptions were a team record for most catches in a game by a running back.

The secondary. James Pierre served as a bystander while getting burned by Cincinnati rookie Ja'Marr Chase for a 34-yard touchdown late in the first half that flipped momentum to the Bengals. Perhaps more troubling was the ease with which Chase beat veteran Joe Haden for a 9-yard score in the third quarter that gave the Bengals a 17-point lead.

Wide receiver JuJu Smith-Schuster left in the second quarter with a rib injury. Right tackle Chuks Okorafor exited in the third quarter while being checked for a concussion, and center Kendrick Green went down with a knee injury in the fourth quarter.

6 — the number of penalties called on Pittsburgh's offensive line. All five starters were flagged for an infraction at least once.

Trying to find comfort on the road. The Steelers have won each of their last five regular-season games against Green Bay.