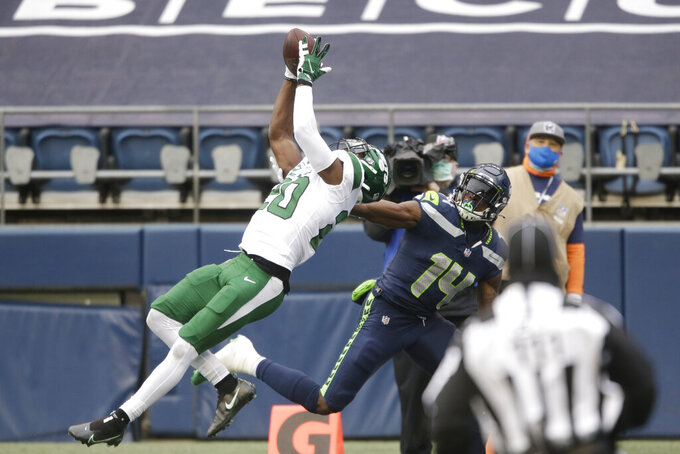 SEATTLE (AP) — Early in the third quarter, Pete Carroll approached Geno Smith. The backup quarterback who had never seen the field in a regular season game for the Seahawks — except for the coin toss — was going to get his chance to play.

Seattle enjoyed a blowout victory and an opportunity to “Let Russ Rest,” on Sunday.

“That’s rare,” Carroll said. “Think about how few times we’ve ever done that.”

Russell Wilson threw four more touchdowns passes to give him a career-high 36 for the season before finally sitting in the fourth quarter, leading the Seahawks to a 40-3 rout of the New York Jets.

Seattle (9-4) rebounded exactly as it hoped after last week’s surprisingly poor offensive performance in its loss to the New York Giants, and stayed even with the Los Angeles Rams on top of the NFC West.

Wilson threw touchdown passes to Freddie Swain and DK Metcalf in the first half, and added TD tosses to Will Dissly and David Moore in the third quarter. It was his fifth game this season with at least four TD passes. Metcalf commandeered a TV broadcast camera as part of his TD celebration after catching a 5-yard TD in the second quarter, his 10th of the season.

Wilson finished 21 of 27 for 206 yards and checked out late in the third quarter, giving way to Smith, the former Jets QB, for his first action since joining Seattle last season. Wilson’s only mistake was a forced throw in the first half on which Marcus Maye made a terrific juggling interception.

Wilson had played every snap of the previous 49 games for Seattle. The last time he wasn’t under center was Week 15 of 2017 when Seattle lost 42-7 to the Rams at home. His previous career high in TD passes came in 2018.

It was also a rare blowout for Seattle. The Seahawks had just one win by more than 14 points in the past two seasons. It was Seattle’s largest victory since a 58-0 win over Arizona in 2012.

“We took on the challenge, kept our heads down to just stay focused on what we need to do and our execution,” Wilson said. “It was a great day today.”

Even with another great performance by Wilson, he wasn't awarded a game ball afterward. That went to Jamal Adams, who set an NFL record for most sacks in a single-season by a defensive back, setting the mark against his former team.

Adams spent a significant amount of time postgame in a receiving line of hugs and handshakes with his former Jets teammates and coaches, including coach Adam Gase.

“Seeing so many guys, it just brings back a lot of memories because I do miss those guys,” Adams said. “This is bigger than football. It goes back to just relationships.”

For the Jets, it was another miserable day in their forgettable season.

Days after firing defensive coordinator Gregg Williams after the collapse at the end of last week’s loss to Las Vegas, the Jets (0-13) showed little resistance on defense and little excitement on offense as they lost their franchise-record 13th straight.

“This one got away from us very quickly and when you have chances against a team like this, you’ve got to take advantage of them or this is what the outcome’s going to be,” Gase said.

And even when the Jets had chances to score, Sergio Castillo struggled. After kicking a 45-yarder on New York’s opening drive, Castillo missed attempts of 37, 41 and 43 yards in the first half.

New York did extend its streak of scoring on its opening drive to seven straight games, the longest active streak in the NFL and longest in franchise history. That was about the only bright spot.

The Jets became the ninth team since the merger to start a season with 13 straight losses. Three of those went on to have winless seasons.

“Losing’s not fun. We’ve just got to be better,” Darnold said.

Adams was credited with a sack after forcing Darnold to run out of bounds for a loss in the second quarter, giving the Seahawks safety the record for most sacks by a defensive back in a single season.

Adams didn’t do much other than run the scrambling Darnold to the sideline. But it was a 1-yard loss and Adams was credited with the sack, giving him 8½ for the season. Adams said he didn't realize that play set the record.

The previous record for sacks by a defensive back was held by Adrian Wilson, who had eight in 2005. Sacks became an official stat in 1982.

“I'm trying to shatter it, to be real with you,” Adams said. “This is just a start.”

Seahawks: lost starting right tackle Brandon Shell after he aggravated an ankle injury in the first half. Shell had missed the previous two games dealing with the injury suffered against Arizona.

Jets: New York is back on the West Coast at the Los Angeles Rams next Sunday.

Seahawks: Seattle makes the last of its East Coast trips traveling to Washington next Sunday.