Wilson's solid finish to rookie season is promising for Jets 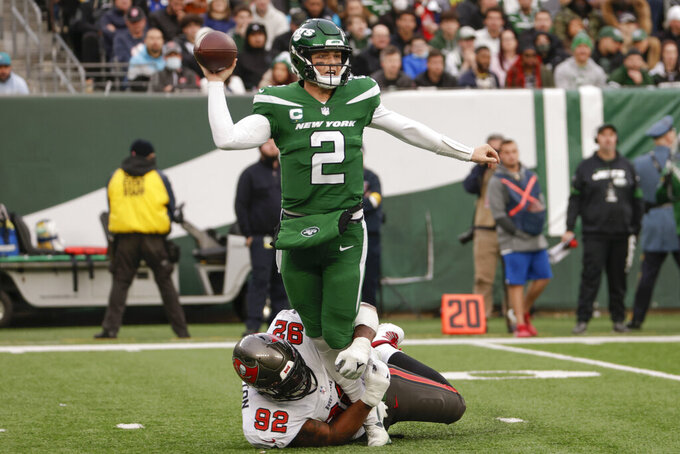 NEW YORK (AP) — The most important number among all of Zach Wilson's recent statistics is zero.

That's how many interceptions the New York Jets rookie quarterback has thrown in his last four games. No passer in the franchise's history has had that kind of streak in his first season.

Not even Joe Namath.

It's absolutely a sign of progress, especially when you consider Wilson tossed four INTs in Week 2 and had nine through five games. The uneasiness over whether the No. 2 overall pick might be a turnover-prone passer who has trouble reading defenses has begun to fade — as Wilson's confidence is growing.

“Yeah, I think I’m just starting to get a better grasp of the offense,” Wilson said after the Jets' 28-24 loss to Tom Brady and Tampa Bay on Sunday. “I thought Mike’s done an amazing job — LaFleur — just putting me in a good position. I just feel comfortable with what’s going on.”

Jets fans have been through a vicious cycle for decades: The team drafts a quarterback who's hailed as a franchise savior — the next Broadway Joe — followed by excitement and talk of unlimited potential. And then it eventually fades into unfulfilled promise, and the search is on again.

Wilson is the next in that long line, and it didn't start off well.

The former BYU star looked as though he was overthinking at times, trying to make too much happen while overcompensating for the lack of talent — largely due to injuries — around him. Then came a sprained knee ligament that sidelined him for four games, and he watched as Mike White, Josh Johnson and Joe Flacco all efficiently ran LaFleur's offense.

It was a blueprint of sorts. It showed Wilson it could be done, and perhaps even better at some point with his supreme athletic ability. He was told to play “boring” football — take the plays the defense gave him — and to play “free” — not think as much, let his instincts guide him.

Wilson has shown that the last several weeks, and his performance against the Buccaneers might have been his best all-around game as a pro. He was decisive, made the easy throws, challenged the defense with some deep ones, and made a few plays when there seemed to be nothing there.

He finished 19 of 33 for 234 yards and one touchdown. Not gaudy numbers, by any means. But again, that zero in the INT column jumps out. And Wilson is showing enough as his rookie season comes to a close for the Jets and their fans to be excited — and for real this time — about the future.

The run game. The Jets ran for 150 yards against the Buccaneers, who came in as the No. 3 overall run defense. It marked the first time since 2016 they had at least 150 yards on the ground in consecutive games. New York had 273 against Jacksonville last week.

Rookie Michael Carter has emerged as the primary ball carrier in a mix-and-match backfield that includes Tevin Coleman, Ty Johnson, La'Mical Perine and Austin Walter. It has also helped balance the offense for Wilson, who has benefited from a more balanced attack.

Communication. The Jets have a young roster, but also a young coaching staff. Saleh's a first-time head coach and several of his assistants are in key roles for the first time in their careers. That includes LaFleur, whose miscommunication with Wilson on the Jets' fourth-and-2 call late in the game Sunday came in the game-swinging sequence.

Saleh said the focus on that took away from what he thought was an otherwise solid game all around by his team.

“For it to be overshadowed by something that, like I've said, always starts with me — that's what made me sick,” Saleh said. “I feel like we won that game. ... We'll be better for it next time. That's one silver lining thing is that we'll win games because of the things that happened yesterday.”

Kenny Yeboah. The undrafted free agent out of Ole Miss had the first two receptions of NFL career, finishing with 26 yards receiving. He spent most of the first half of the season on the practice squad, but is getting opportunities late in the season due to injuries at tight end.

Denzel Mims. The wide receiver's already rough second NFL season hit a new low by not playing a single snap against Tampa Bay. The second-round pick has been surpassed on the depth chart by lower-drafted players and undrafted free agents. He has just eight receptions this season, and none in his last four games.

LT George Fant is getting a second opinion on his injured knee, but Saleh said the ACL is intact. ... Carter remains in the concussion protocol. ... TE Dan Brown is unlikely to play Sunday after injuring his hip. ... DE Bryce Huff is dealing with an ankle injury.

477 — The Jets have given up a franchise-record number of points that tops the 457 allowed last season. Improving the defense will clearly be a major focus in free agency and the draft in the offseason.

The Jets wrap up their season with a game at AFC East-rival Buffalo. The Bills' top-ranked defense will provide a final tough test for Wilson as he caps his rookie season.