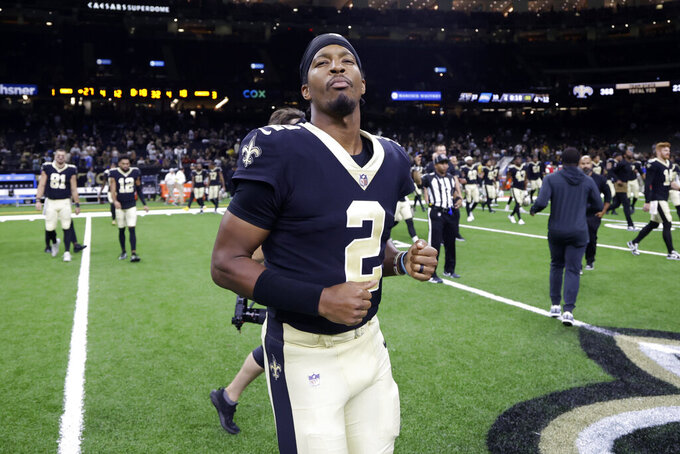 Winston completed all four of his passes for 59 yards in the only series he played, setting up the first of Mark Ingram's two touchdowns in New Orleans' 27-10 preseason victory over the Los Angeles Chargers on Friday night.

“It meant a lot to get a chance to play," Winston said, downplaying the significance of his brief performance in relation to the long recovery that preceded it.

“My gratitude for being out there is way more important than completing passes," Winston asserted. “Like, I had a season that I didn’t finish. So, I’m thankful.”

The Saints (1-2) did not escape the game without a potentially problematic injury, however. Rookie left tackle Trevor Penning, the second of two first-round draft choices by the Saints last spring, was carted to the locker room with an apparent left foot injury. He was hurt while being run into from behind by tight end Juwan Johnson near the Chargers goal line.

Winston, who had surgery last November to repair a torn anterior cruciate ligament, also had missed the Saints' first two preseason games with a sprained right foot. But after he returned to full team drills in practice this week, first-year head coach Dennis Allen gave Winston a brief tune-up.

“I wanted to get Jameis out there in some game action; it's been a while since he's been in that environment,” Allen said, noting that Winston also had missed joint practices in Green Bay because of his foot sprain.

“He was confident in the pocket. I thought he was decisive with his reads," Allen said. "There was a couple of plays where he really stepped up in there and rifled the ball in.”

Winston completed his first two passes to newly acquired veteran receiver Jarvis Landry for 20 and 15 yards. He added a 19-yarder to first-round draft choice Chris Olave, followed by a 5-yard toss to running back Alvin Kamara.

Kamara added a 13-yard run after that to set up Ingram's 1-yard score.

Most of the Saints' projected offensive starters played the opening series before getting the rest of the game off. The Chargers (0-3) played very few starters.

“We got full evaluations, which is what we were after in these three preseason games,” Chargers coach Brandon Staley said. “There is a lot to be decided here, especially at the back half of our team. We have to make sure that we take a good, hard look at it."

Trey Pipkins III started at right tackle, a spot for which he's been competing with Storm Norton. Norton started at left tackle in place of Rashawn Slater, who had the game off.

Joshua Kelley, who's competing with Roundtree for backup running back snaps, had rushes of 15 and 9 yards. Kelly hurdled Saints safety Marcus Maye on his longer run, which came on third-and-14.

“It’s not an accident. It’s not something I just did out of the blue. I’ve been doing that since college," Kelley said. “I saw he was going low on me, so it was my chance. I thought, ‘Let me just jump over this dude.’”

Wil Lutz's 47-yard field goal as time expired in the first half gave New Orleans a 17-10 lead. The Saints went ahead 24-10 on Ian Book's 9-yard pass to Kirk Merritt.

Saints: Penning's injury came while the other player in the running to start at left tackle, James Hurst, is trying to work his way back from an injury that has kept him out of practice for more than a week. However, Allen said Hurst appears on track to return soon. Receiver Tre'Quan Smith also went to the locker room after a bizarre play in which the ball bounced out of his hands as he attempted a diving catch and floated to teammate Marquez Callaway for a first-down reception. Reserve defensive tackle Albert Huggins was carted off the field in the fourth quarter with an apparent left leg injury. Saints receiver Michael Thomas, who missed all of last season with an ankle injury, sat out the game with hamstring soreness and did not play at all this preseason.

The Chargers host the Las Vegas Raiders on Sept. 11 in the regular-season opener for both teams.

The Saints open their regular season on the same day, visiting the NFC South rival the Atlanta Falcons.

By Mark Anderson 22 minutes ago
By Teresa M. Walker an hour ago
By Arnie Stapleton an hour ago
3 hrs ago
By The Associated Press 6 hrs ago