Zappe's play a silver lining as injuries mount for Patriots 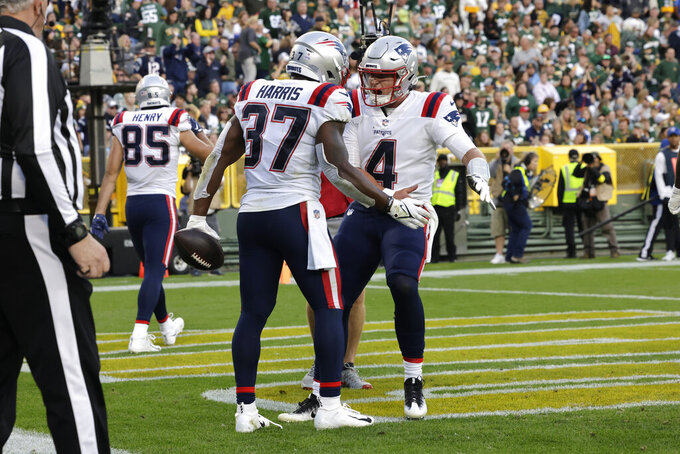 New England Patriots running back Damien Harris (37) celebrates with teammate quarterback Bailey Zappe (4) after scoring on a 5-yard touchdown run during the second half of an NFL football game against the Green Bay Packers, Sunday, Oct. 2, 2022, in Green Bay, Wis. (AP Photo/Mike Roemer)

FOXBOROUGH, Mass. (AP) — The Patriots spent their offseason trying to improve the personnel around quarterback Mac Jones, and then used the preseason to tweak their offense to best utilize the players they added.

After injuries in back-to-back weeks to Jones and backup Brian Hoyer, New England could head into this week's matchup with Detroit with its third starting quarterback in three games.

Third-stringer Bailey Zappe didn’t do anything spectacular after Hoyer was sacked on his blind side by Green Bay Packers linebacker Rashan Gary in the first quarter on Sunday and left the game with a head injury.

Zappe kept his team in it, though, completing 10 of 15 passes for 99 yards and a touchdown to help the Patriots force overtime before falling 27-24 at Lambeau Field.

“I think we all know what a backup quarterback’s potential job and role is,” Patriots coach Bill Belichick said. “Bailey knows it, we know it, everybody that plays that position knows it. That’s what happened and he stepped in. He was well prepared. I thought, generally, he handled himself well. Certainly, things he can improve on. ... But I thought he did a solid job.”

The Patriots fell to 1-3 for the second straight season. New England is last in the AFC East for the first time since losing its opener in 2014.

But Zappe’s play and a better overall performance by the offensive line gave New England hope it can remain competitive if Hoyer and Jones, who has an ankle injury, remain sidelined.

“Of course, there’s things we’re going to see ... that we look back and say ‘If we did this differently,’” Zappe said. “There are things personally for me that if I make a throw or if I do something differently, the outcome’s different. But that’s the good thing about football, you’ve always got the next game.”

If that next opportunity comes against the Lions, Zappe said his priority will be to keep things simple.

“Just to continue to do my job. Give the ball to playmakers and let them do what they do best out in space,” he said. “Continue to stay cool, calm and collected back there. And run the offense and just do the best I can for the team.”

Stopping the run. The Patriots gave up a season-high 199 yards to the Packers and are allowing 134 yards per game, which ranks 26th in the NFL.

The Patriots’ 2022 draft class. Along with Zappe, rookie cornerback Jack Jones and kick returner Marcus Jones played well. With Jalen Mills inactive because of a hamstring injury, Jack Jones put New England in front 10-7 in the second quarter, intercepting a pass by Aaron Rodgers and returning it 40 yards for a touchdown. Marcus Jones averaged 27.8 yards on four kickoff returns and 24.5 yards on two punt returns.

Right tackle Isaiah Wynn. He was responsible for both of Gary’s sacks — the one in the first quarter in which Hoyer was injured, and in the second quarter when Zappe was strip-sacked. Wynn was also whistled for false start and holding penalties. Through four games, the 2018 first-round pick leads the NFL with five total penalties. He was benched briefly in favor of veteran Marcus Cannon.

1 — Zappe is the first player to throw a touchdown pass while making his NFL debut as a visitor at Lambeau Field.

With two quarterbacks on the mend, the Patriots may look to add some insurance at the position. It could mean some tough roster choices for Belichick. The good news is the New England is preparing for a Lions team that’s allowing a league-high 444.8 yards and 35.3 points per game.