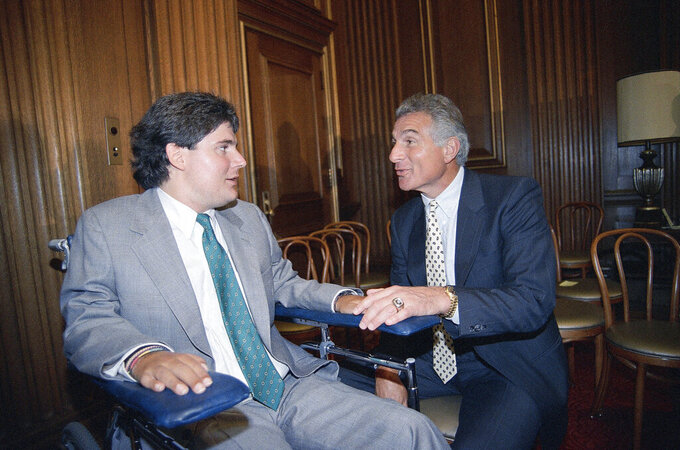 FILE - In this June 28, 1989, file photo, Marc Buoniconti, left, and his father, former Miami Dolphins player Nick Buoniconti, speak after Marc received the American Institute for Public Service Jefferson Award at the Supreme Court in Washington. Pro Football Hall of Fame middle linebacker Nick Buoniconti, an undersized overachiever who helped lead the Miami Dolphins to the NFL's only perfect season, has died at the age of 78. Bruce Bobbins, a spokesman for the Buoniconti family, said he died Tuesday, July 30, 2019, in Bridgehampton, N.Y. (AP Photo/J. Scott Applewhite) 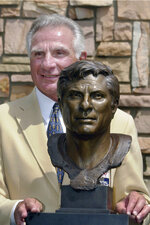 MIAMI (AP) — Pro Football Hall of Fame middle linebacker Nick Buoniconti, an undersized overachiever who helped lead the Miami Dolphins to the NFL's only perfect season and became a leader in the effort to cure paralysis, has died. He was 78.

The 5-foot-11, 220-pound Buoniconti was bypassed in the NFL draft but went on to a 15-year career. He was captain of the Dolphins' back-to-back Super Bowl champions, including the 1972 team that finished 17-0.

Following retirement, Buoniconti and his son, Marc, worked to raise more than a half-billion dollars for paralysis research. The younger Buoniconti was paralyzed from the shoulders down making a tackle for The Citadel in 1985.

Marc Buoniconti said his father was his biggest hero.

Following retirement, Buoniconti worked as an attorney, a broadcaster, as president of U.S. Tobacco and as an agent to such athletes as Bucky Dent and Andre Dawson. For 23 seasons he was co-host of the weekly sports show "Inside the NFL" on the HBO cable network.

"He lived a life of honor and nobility, and his legacy will live forever through his Bronzed Bust in Canton, Ohio," said Pro Football Hall of Fame President and CEO David Baker.

Buoniconti was chosen for the all-time AFL team in 1970, and for the NFL Pro Bowl in 1972 and 1973. NFL Commissioner Roger Goodell said Buoniconti was a champion on and off the field.

"He was the leader of one of the most dominant NFL teams in history, and earned his place in the Pro Football Hall of Fame with his grit, fearlessness and skill while playing with the Patriots and Dolphins," Goodell said.

A native of Springfield, Massachusetts, Buoniconti played guard on offense and linebacker on defense for Notre Dame. He was small for a pro linebacker, but after being taken in the 13th round by the Boston Patriots of the upstart AFL, he played for them from 1962 to 1968.

He made the AFL All-Star Game six times and had 24 career interceptions for the Patriots, including three in a single game in 1968.

"He was the consummate team captain, the heartbeat of our team," Hall of Fame fullback Larry Csonka said. "I'll miss Nick, his wisdom and class."

"Nick was special to me in every way," said his former coach, Hall of Famer Don Shula. "He was someone I greatly admired."

In 1985, he and Marc Buoniconti helped to found the Miami Project to Cure Paralysis, which has become the world's largest spinal cord injury research center.

"Marc, the Miami Project Team and I are committed to carry Nick's banner and legacy forward to the goal line," project chairman Dr. Barth Green said.