Doug Pederson not shy about putting blame on Carson Wentz 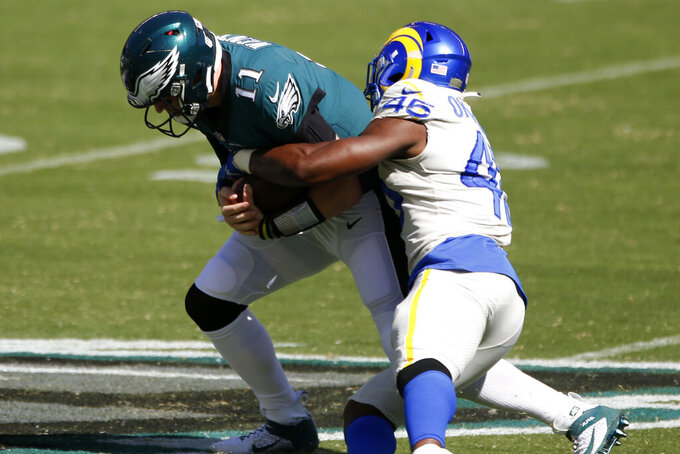 PHILADELPHIA (AP) — Carson Wentz is struggling and his coach says he's trying to do too much.

The Philadelphia Eagles are off to a 0-2 start for the first time in five years following a 37-19 loss against the Los Angeles Rams. Wentz threw two interceptions, including one from the Rams 21 when the Eagles had an opportunity to take the lead after falling behind by 18 points. It’s the first time in his five-year career Wentz has thrown multiple picks in consecutive games.

There’s plenty of blame to go around. Protection was poor in Week 1 when Wentz was sacked eight times, though he could've thrown the ball away a few times. Two rookie receivers didn’t make aggressive plays to break up the interceptions in that game.

The costly pick against the Rams was thrown behind wide receiver J.J. Arcega-Whiteside and cornerback Darious Williams made an excellent grab. Wentz shouldn’t have tried to force the ball to Arcega-Whiteside, but the second-year pro didn’t sell the cornerback well enough before breaking inside.

Pederson didn't disagree when asked why Wentz seems to have regressed this season.

“I just don’t want Carson to feel like he has to make all the plays every single time,” Pederson said Monday. “I want him to just be Carson and you guys know him, you’ve been around him, you’ve heard him, his demeanor. He wants to do everything right and we’ve given him control to do that, but we just have to continue to work to get better. I don’t think anybody can totally master the sport. You’re constantly learning and getting better, and that’s what we’ve got to do and continue to coach that.”

Miles Sanders ran for 95 yards on 20 carries and the Eagles had 121 on the ground, averaging 4.7 per run. They fell to 23-4 under Pederson when they have at least 120 yards rushing.

The pass rush wasn’t there against Jared Goff. Brandon Graham had the only sack and the unit generated just two hits. A high-priced interior of the defensive line featuring Fletcher Cox, Malik Jackson and Javon Hargrave couldn’t stop the run or pressure the quarterback.

“We hold ourselves accountable, we are the engine of this defense,” Graham said. “We have to make sure we step it up some. We can be more dominant, and I think it’s just going to start in practice, like we’ve been doing.”

A week after allowing eight sacks against Washington, the offensive line didn’t give up any against Aaron Donald and the Rams, and also opened holes for the run game. Not all the sacks against Washington were the fault of the linemen. But they made sure Wentz had protection. Lane Johnson’s return was a big boost after the three-time Pro Bowl right tackle missed the opener.

“Obviously, last week, everybody kind of took their turns messing up, whether it was blown blocks, blown assignments, whatever,” All-Pro center Jason Kelce said. “The pass protection last week certainly was not good enough. It felt pretty good out there (against the Rams). Obviously, playing one of the best players in the league, Aaron Donald, is a huge emphasis on being able to stop him. He is a game wrecker. I thought we did a pretty good job of stopping him and the majority of their players in terms of pass rush.”

Left guard Isaac Seumalo will go on injured reserve with a knee injury.

191 — The Eagles allowed the fourth-most yards rushing under defensive coordinator Jim Schwartz. After the offense got within 24-19 in the fourth quarter, a 40-yard run by Darrell Henderson on the next play set the Rams up for a touchdown that sealed it.

Joe Burrow and the winless Cincinnati Bengals (0-2) visit Philadelphia on Sunday. The Bengals had extra time to rest and prepare following a 35-30 loss to Cleveland last Thursday.