Falcons looking for answers at RB behind Devonta Freeman 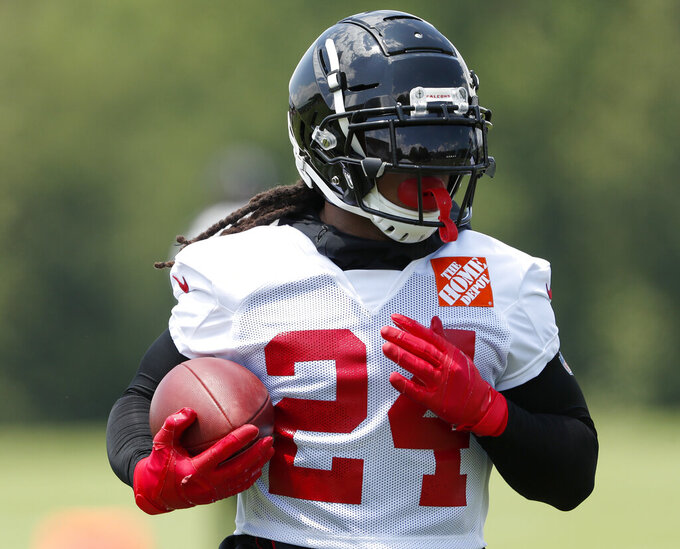 FILE - In this Tuesday, June 11, 2019, file photo, Atlanta Falcons running back Devonta Freeman (24) runs during an NFL football practice in Flowery Branch, Ga. When Atlanta Falcons coach Dan Quinn calls running back Devonta Freeman a "multiplier" he is talking about Freeman making every other player on the offense better. That makes Freeman's health an obvious key after he was limited by injuries to two games in 2018. (AP Photo/John Bazemore, File)

Even if Freeman avoids injury after missing 14 games in 2018, the Falcons still must replace Tevin Coleman, the former second part of the team's running back tandem.

As the Falcons prepare for their preseason opener against Denver in Thursday night's Hall of Fame game in Canton, Ohio, there is no leader in the competition to be Freeman's backup. Several contenders have flashed different strengths in training camp, creating the possibility of a deeper rotation than in recent years.

"Today I would say it would be a different kind of shared role," Quinn said after Monday's practice.

"I'm not discouraged by any of them at all. I'm more encouraged," Quinn said, adding: "There hasn't been a separation" in the competition.

"That's a lot of weapons at running back," Quinn said.

Barner, who played with Carolina in 2018, drew a gasp from fans on Monday when he caught a pass from Matt Ryan and made a cut to dodge a defender, opening up first-down yardage.

"I think there's a lot of depth, for sure," Ryan said. "We've got a lot of good players. That's a good problem to have. We feel confident in all of them. It will be fun to see those guys compete when they get on the field and showcase what they can do when it's live action."

Freeman and most other starters will see little playing time against Denver. Quinn has said the extra preseason game will be a showcase for young players.

Freeman appears to be making a strong recovery from last season's groin injury. Quinn says Freeman is a "multiplier" in that his presence makes his teammates better. It's clear that Freeman's return is a key for the Falcons' hopes of returning to the playoffs, especially after Coleman signed with San Francisco.

With a healthy Freeman, the Falcons ranked fifth in the league in rushing in their 2016 Super Bowl season. Even with Freeman missing two games in 2017, Atlanta ranked 13th.

The Falcons fell to 27th in rushing last season as Freeman played in only two games. Quinn wasn't happy with the drop in production or the diminished emphasis on the running game. Dirk Koetter was hired as offensive coordinator, replacing the fired Steve Sarkisian, with a mandate to revive the ground game.

Freeman's constant smile is the best indicator he feels good about his outlook for the season. His moves on the field are another good sign for Quinn.

"He looks exactly as we remember him in his best space," Quinn said.