With playoffs unlikely, fading Patriots have questions at QB 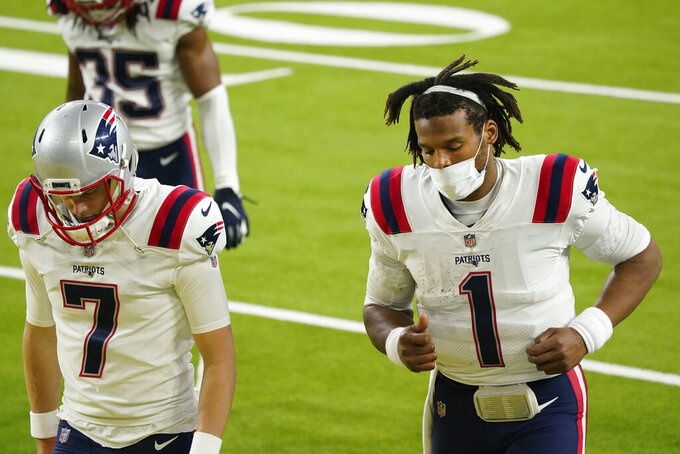 New England Patriots quarterback Cam Newton (1) runs off the field next to Jake Bailey (7) after a loss to the Los Angeles Rams during an NFL football game Thursday, Dec. 10, 2020, in Inglewood, Calif. (AP Photo/Ashley Landis)

For the first time in more than a decade, the New England Patriots will head into their final three games of the season with an unsettled playoff fate.

The Patriots entered the week in 10th place in the AFC and trudging through one of their worst years of Bill Belichick’s tenure. Now 6-7 following a 24-3 loss to the Los Angeles Rams on Thursday night, New England's long-shot hopes of extending an NFL-record run of 11 consecutive playoff appearances have faded even more.

And the questions about New England's future at quarterback that surrounded the team this offseason following Tom Brady's departure have returned, with perhaps even greater urgency.

The Patriots' loss to the Rams was marked by the same problems that have plagued New England for most of 2020.

Cam Newton's struggles in the passing game reemerged, leaving the offense one-dimensional and predictable opposite a dogged Los Angeles defense that disrupted the Patriots’ run game and plowed through an offensive line that surrendered a season-high six sacks.

It led to Newton being benched in the fourth quarter in favor of backup Jarrett Stidham, raising the question of whether a more permanent change could be on the horizon. But when asked postgame whether he plans to continue with Newton as the starter, Belichick was unequivocal.

“Cam’s our quarterback,” he said.

Belichick was queried again on Friday and again dismissed the idea of starting Stidham.

“I’ve answered that question for the last time,” Belichick said.

As for where the Patriots go from here, safety and team captain Devin McCourty said their approach will remain unchanged until they're eliminated from playoff contention.

“Just keep playing. It is what it is right now. We’ll keep fighting. We’ll see how it works out,” he said. “But there’s no easy answer other than we have three games left. The goal is still the same. Try to win the remaining three games.”

It was a sentiment that was repeated by his teammates.

Special teams play continues to be one of the few bright spots for the Patriots. Gunner Olszewski, who entered the game leading the NFL with a 26.9-yard punt return average, returned a punt 21 yards in the fourth quarter. Nick Folk also extended his made field goals streak to 21.

When New England did move the ball on offense, it couldn’t finish drives, which has been a familiar refrain. The Patriots were 0 for 4 in the red zone Thursday and failed to reach the end zone for the second time this season. Through 13 games, they are ranked 27th in the NFL in the red zone, scoring a touchdown on 52.3% of their opportunities.

Cornerback Myles Bryant continues to impress. The undrafted rookie notched his first career interception in the first quarter, wrestling the ball away from Robert Woods for the pick. Bryant rolled to his feet and returned the ball 32 yards for an apparent touchdown, but he was ruled down by contact after a review, negating the score.

The run defense. LA's Cam Akers rushed for 35 yards on the second play of the game. It set the tone for a night on which Los Angeles picked through a New England defense that allowed 186 rushing yards. It marked the fourth time the Patriots have given up 150 or more yards on the ground this season.

Safety Adrian Phillips injured his hand before halftime, but returned in the second half. Damien Harris, who leads the team in rushing, also left the field in the fourth quarter.

17 — The streak of consecutive 10-win seasons by the Patriots that was snapped with Thursday’s loss.

At a minimum, New England will be two games out of the AFC’s final wild-card spot following this weekend’s games. The Patriots finish the season against the Dolphins (8-4), the AFC East-leading Bills (9-3) and the winless Jets (0-12).