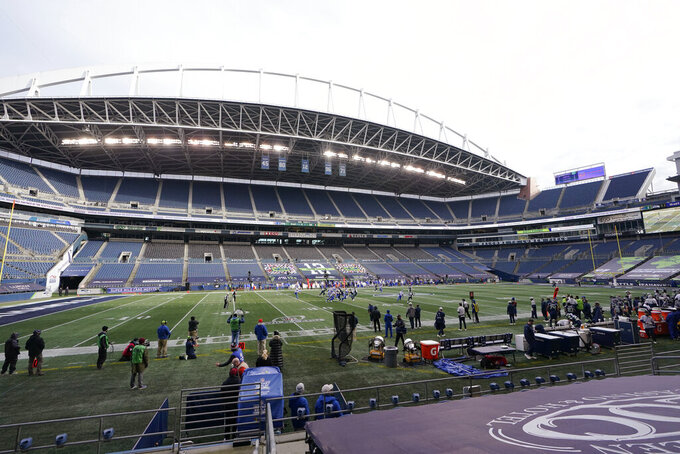 The Seattle Seahawks play against the Los Angeles Rams in an otherwise empty stadium during the first half of an NFL wild-card playoff football game, Saturday, Jan. 9, 2021, in Seattle. (AP Photo/Ted S. Warren)

They watched less than two weeks ago as the Seattle Seahawks loudly celebrated a division title the Rams felt they gave away. Los Angeles desperately wanted another shot.

Behind a lot of Cam Akers churning yards on the ground and mostly a great defense, the Rams are moving on in the NFC playoffs at the expense of the Seahawks.

“We come up here, and all week we were told how good they are and how we snuck into the playoffs," Goff said. "Two weeks ago you saw them smoking cigars and getting all excited about beating us, and winning the division, and we were able to come up here and beat them.”

Akers rushed for 131 yards and a touchdown, Darious Williams returned Russell Wilson’s interception 42 yards for a score, and the Rams beat the Seahawks 30-20 in the NFC wild-card playoff game Saturday.

“A lot of guys stepped up and answered the bell in a big way,” Rams coach Sean McVay said. “Darious Williams showing up, I thought that was a huge momentum shift for us.”

The best defense in the league during the regular season carried its dominance into the playoffs — even while missing unanimous All-Pro tackle Aaron Donald for much of the second half. No team was better at limiting yards or points than the Rams (11-6) and they continued to torment Wilson and the Seahawks (12-5).

Seattle's quarterback was under siege from the defensive front and a secondary that minus one play never let DK Metcalf or Tyler Lockett break loose. Donald, before leaving with a rib injury, and Jalen Ramsey were superb. But so were other role players such as Troy Reeder, Jordan Fuller and Leonard Floyd.

Floyd had two of the Rams' five sacks. Two of the others belonged to Donald. The Rams allowed just 278 total yards and 11 first downs.

The victory sent the Rams into next week’s divisional playoff round, likely at top-seeded Green Bay unless Chicago upsets New Orleans.

“We’re excited about competing to go see who we play next and see if we can keep this thing rolling,” McVay said. “But we’ll enjoy this.”

Williams’ third interception against Wilson after picking him off twice in Los Angeles came as he jumped a wide receiver screen intended for Metcalf and returned it untouched for a 13-3 lead midway through the second quarter.

Akers added a 5-yard TD run just before halftime for a 20-10 lead. It proved enough against a Seattle offense disjointed and confused nearly from the start.

Wilson had one of his worst playoff performances. He was 11 of 27 for 174 yards. Wilson connected with Metcalf on a pair of TDs: 51 yards in the first half off a broken play, and a 12-yard TD with 2:28 left to make the score more respectable.

Seattle never played with the lead and was 2 of 14 on third downs. It's first home playoff game in four years was a dud without its raucous home crowd, and the Seahawks saw their 10-game home playoff win streak snapped.

Their last home playoff loss came in January 2005 to the St. Louis Rams.

“I told these guys I have no place in my brain for this outcome,” Seattle coach Pete Carroll said. “We were planning on winning and moving on.”

The Rams pulled off the upset without a healthy quarterback for more then three quarters. John Wolford started for the second straight week but injured his neck when he dived headfirst in the first quarter and was hit in the helmet by Jamal Adams’ shoulder. Wolford was taken to a hospital as a precaution, but McVay said he was in the locker room celebrating after the victory.

“I think it was really just a stinger. He definitely seemed good,” McVay said.

Goff took over less than two weeks after undergoing surgery on his right thumb; he was injured in the Week 16 loss to Seattle. Goff didn’t do anything spectacular but also avoided major mistakes.

Akers, the Rams' rookie ball carrier, was outstanding after not playing two weeks ago. Akers had the best rushing day by a Rams running back since Marshall Faulk went for 159 against Philadelphia in January 2002.

The Rams finished with 164 yards rushing.

“He’s made of the right junk. His heart, his passion for the game is special,” Rams left tackle Andrew Whitworth said. “Anytime you see in this league that you can run the football in the playoffs, it’s about more than just all the fantasy things you see in the regular season. It’s going to be about imposing your will on another team.”

Donald left in the third quarter with a rib injury. After going in and out of the locker room a couple of times he was a spectator most of the second half. WR Cooper Kupp limped off grabbing at his right knee in the closing minutes.

Wolford was 3 of 6 passing for 29 yards and had one run for 2 yards before getting hurt.

Rams: will most likely play at the Packers next week.

Seahawks: will head into an offseason filled with questions after winning the division but experiencing another early playoff exit.