Rodgers-LaFleur relationship strengthening and it's showing 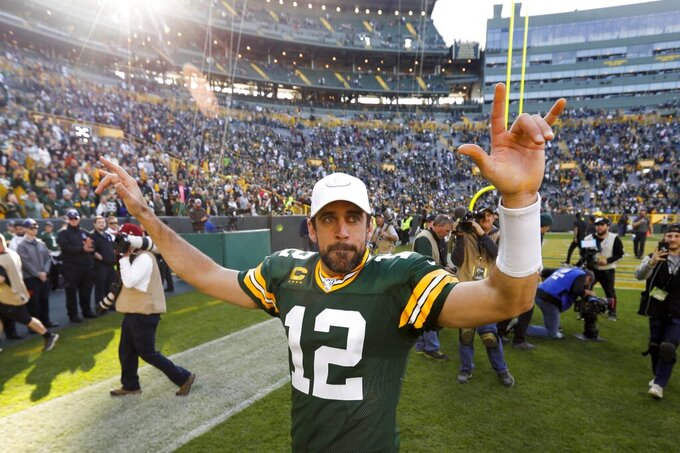 GREEN BAY, Wis. (AP) — Aaron Rodgers is one of the NFL's top quarterbacks. But the 35-year-old two-time MVP and Super Bowl champion had to basically start from scratch in his 15th season.

LaFleur presented Rodgers with the game ball on Sunday after he threw for five touchdowns and ran for another in a 42-24 win over the Raiders.

LaFleur said Monday that he likes where he and Rodgers' relationship is at this point.

"I just think any time as a play-caller, that relationship with the quarterback is absolutely critical," he said. "Whether it's here or whether it was in my past in Tennessee, wherever it's been, I've always valued that relationship because you gotta be on the same page.

"The way I view the quarterback is, it's an extension of the coaching staff. We gotta be on the same page. I think that just like any relationship, it takes time to make sure the communication is on point. I like where we're at right now, but we gotta continue to work each and every day just like any other relationship."

Rodgers set a single-game franchise record with a perfect 158.3 passer rating after completing 25 of 31 passes for 429 yards and no interceptions, all while his top target, Davante Adams, was sidelined with turf toe.

"I still don't understand how they put that rating together but it does sound pretty good," Rodgers said.

Rodgers also threw touchdown passes to two different running backs (Aaron Jones and Jamaal Williams) in a game for the first time in his career. If Rodgers has finally hit his stride in LaFleur's offense, the rest of the league is in trouble.

Green Bay's leaky run defense struggled on Sunday as rookie Josh Jacobs had 124 yards, including a 42-yarder on the opening drive.

Now, Jacobs has had a successful first season. He entered Sunday with 430 yards rushing for the second most by a Raiders rookie through five games behind Bo Jackson's 475 yards in 1987. But Green Bay is allowing 128.9 rushing yards per game, which ranks 24th in the league. The Packers allowed 155 on Sunday.

Marquez Valdes-Scantling. The second-year receiver was a game-time decision after suffering knee and ankle injuries last week. Valdes-Scantling played sparingly and finished with two of the game's biggest plays — a 59-yard reception and a 74-yard score. The 6-foot-4 speedster set a single-game franchise record for the most receiving yards (133) in a game with two or fewer catches. Valdes-Scantling is morphing into the perfect complementary option to Adams.

Green Bay's defensive front. The group's pass rush has been tremendous this season, but nearly nonexistent against the run. Being one-dimensional won't cut it.

"We want to be good against it all," defensive coordinator Mike Pettine said earlier this season. "It's not a conscious effort to say we're just going to play coverage every snap and just bend and not break. That's been in our biggest issue, and we've talked in the room about it, that we've got to get a handle on the explosive plays."

Adams watch continues, as the two-time Pro Bowler continues to work back from his toe injury. But there's no rush to get him back on the field, especially while other guys are filling the void.

"I can promise you we need him and we're a better offense with 17 on the field," Rodgers said of Adams. "We've just been spreading it out a little bit more and guys have been stepping up. ... I think without him there, we've had to scheme up plays for other guys and guys have made plays when their number's been called."

The Packers play at Kansas City on Sunday night. The Chiefs will be without reigning MVP Patrick Mahomes, who suffered a dislocated kneecap Thursday night.

"With Mahomes' status, the (Kansas City) defense is going to feel like they need to pick up the slack a little bit so we know it's going to be a challenge," offensive tackle Bryan Bulaga said Monday. "It's a big road game. We're going to have to prepare for that and get ready and try to play some of our best ball out there."