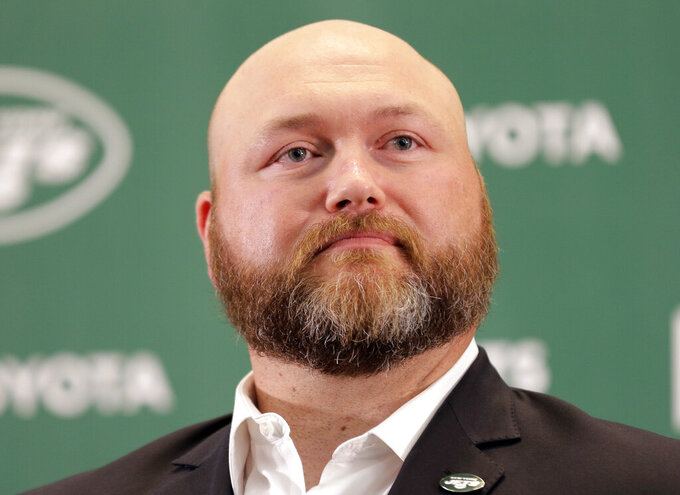 NEW YORK (AP) — Joe Douglas' to-do list this offseason is massive — and so is the climb the New York Jets need to make to reach respectability.

The general manager's arduous task begins with finding a head coach. That process has already begun, with the Jets asking permission to speak to multiple candidates.

After a 2-14 season that had some fans rooting for losses to ensure the top pick in the draft, Douglas understands that decision will set the tone for next season — and far beyond.

“I think you feel pressure to succeed every day you walk in the building," Douglas said Tuesday during a video call. "So, obviously, there’s a lot of big decisions that lay in front of us this offseason — and we have to get them right.”

Adam Gase was fired Sunday night after going 9-23 in two years, marked by the team's franchise-worst 0-13 start this season.

“Obviously, this was a tough season for all of us, our fans included,” Douglas said. “Speaking for everyone in this building, this record, it belongs to all of us.”

He and Gase are longtime friends, but even Douglas knew the decision by Jets chairman and CEO Christopher Johnson was inevitable — and necessary.

“This is the hard part of the business,” said Douglas, who was hired six months after Gase was hired in 2019. “I wanted nothing more than for us to succeed here together. This was hard for me. I know people outside this building, they may not see it at this time, but he did some really good things here that are going to help us moving forward.”

But with another coach in charge.

Johnson announced Monday that he, team president Hymie Elhai and Douglas will work collaboratively on finding the next coach, but the GM will be leading the search. Douglas' opinions will be weighed heaviest by the team, so it's on him to bring in the right person.

Douglas mentioned finding “a great partner,” someone with great character and integrity, an outstanding communicator with a vision for what the identity of the Jets will be. He also said that as the team casts “a very wide net,” it “won't shy away from” anyone who doesn't have previous NFL coaching experience.

“Organizations that have long-term success, they've gotten the head coach and quarterback right," he said. "We have a lot of decisions to make, but the one we're focused on right now is head coach. After that, we're going to have quite a few more decisions to make.”

That includes determining the future of quarterback Sam Darnold, who was the No. 3 overall pick in 2018 but has not yet lived up to that lofty draft status.

“I think that Sam's going to be a great quarterback,” Douglas insisted. “I'm excited to get a head coach in here, go through our process. ... I think Sam has a very bright future in this league.”

Douglas pointed out that Darnold “faced a lot of obstacles” this season, but was non-committal to him being the quarterback next season — and mainly because he can't know what will happen just yet.

The Jets have the No. 2 overall pick in April and could be staring at a difficult choice: draft another quarterback and move on from Darnold, or take another position or trade down and keep the 23-year-old QB. Much of that decision, of course, will depend on who takes over as coach.

And that goes for the rest of the roster, too.

The Jets will have at least 20 players scheduled to become unrestricted free agents, including safety Marcus Maye — who Douglas said re-signing will be “one of the priorities of our offseason.” New York is also expected to have around $73 million in salary cap space, so Douglas' phone will surely get a workout this winter when the new league year starts.

"And really be the leader that will take us to the next level moving forward."