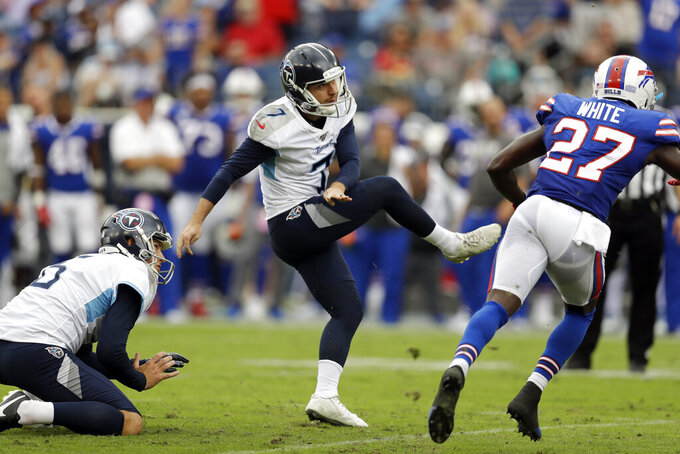 It only got worse for Tennessee's replacement kicker and the Titans.

After officials wiped a touchdown off the board for Marcus Mariota being over the line of scrimmage when he threw a pass to A.J. Brown, Santos lined up from 33 yards for the go-ahead field goal, only to have Darryl Johnson of the Bills block his kick.

Coach Mike Vrabel sent Santos out for one last field goal. Santos missed again, this time wide left from 53 yards as the Titans lost 14-7 to Buffalo on Sunday.

"Never had a day like this," Santos said. "Have been bouncing around with teams for years and just haven't had a performance like this. In practice and workouts and in training camps, I haven't missed a kick under 40 yards in probably two years or something ... That is something that hasn't showed up till today."

The Titans (2-3) signed the native of Sao Paolo, Brazil, on Sept. 4 when they put veteran Ryan Succop on injured reserve, a move designed to let Succop gain strength after having surgery this offseason on his kicking leg. Santos came in having made 4 of 5 field goals for Tennessee, and he had made 83.1 percent for his career.

Vrabel defended sending Santos out for the final field goal attempt with 6:31 left with Tennessee trailing 14-7, saying he had confidence in the kicker. Vrabel also wanted to get some points knowing the Titans would need to score again to win.

"We like to think that if you make mistakes we can get them fixed and corrected, whether that's on the field, whether that's coaching that's really ... well this is our kicker," Vrabel said. "This is a guy who's made some kicks for us. We'll have to do a better job making them, and coaching him, and executing them."

The Titans now have lost three of four, including their first two home games this season, and Succop is three weeks from being eligible to join the roster. They pointed fingers at their own missed opportunities and mistakes in the locker room, not at Santos.

Tennessee started the game with a holding penalty on three-time Pro Bowl left tackle Taylor Lewan in his return from a four-game suspension, and that wiped out a 26-yard pass to Delanie Walker. The Titans gave up five sacks and were flagged eight times for 60 yards.

Mariota was flagged for an illegal forward pass, wiping out a 10-yard touchdown pass that would've put the Titans up 14-7. He was sacked on the last play of the first quarter, which led to Santos' first attempt from 50 yards.

"Those kicks were tough," Mariota said. "At the same time, it shouldn't have come down to that. For us as an offense, we need to pride ourselves on going into the end zone and scoring touchdowns and not leaving points off the board."

The Titans wasted a strong performance by a defense that came in giving up just 15.5 points a game for fourth in the NFL and gave up only 14 to Buffalo. The defense came up with four sacks and an interception that set up the Titans' lone touchdown that counted on a 1-yard dive by Derrick Henry after a Mariota TD run was overturned.

"It's tough, but I think they pay him a lot of money to make them kicks," Walker said.