Brees: Saints 'only going to get better' before playoffs 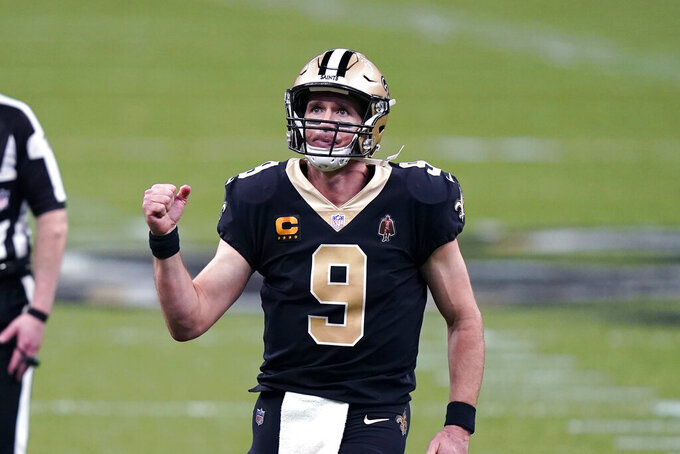 After all, both losses were by three points, one came against the team with the best record in the NFL and injuries have prevented the Saints from having lineup continuity at key positions lately. There's also the fact that the Saints (10-4) already have clinched a playoff spot.

Now New Orleans has two regular-season games left to try to win the NFC South — for a fourth straight season — and tune up for the postseason.

Brees also notes that other key, short-term absences — like that of receiver Michael Thomas for the final three regular season games — will pay off when the club is healthier for the postseason.

Brees counts himself among the players who need to ramp back up, having played Sunday for the first time since a four-game absence caused by fractured ribs and a punctured lung. Brees' performance fell below his usual standard in Sunday's 32-29 loss to Kansas City. He completed fewer than half of his passes and was intercepted once.

“Listen, I missed the last four weeks; I’m trying to kind of get back into it again, and get the feel and the rhythm and all that,” Brees said. "So, I think there’s just a little bit of that going on right now. But, at the end of the day, we’re only going to get better week to week, from now until the end of the season, and then going into the playoffs."

Meanwhile, Saints defensive back C.J. Gardner-Johnson said he sees no reason why New Orleans' defense should suddenly have confidence problems after being ranked as high as No. 1 in the NFL a few weeks ago.

“The loss, it hurt, but as a whole, as a unit, as a D, we can’t get down on ourselves,” Gardner-Johnson said.

But Gardner-Johnson seems fueled by the notion — real or imagined — that critics of the Saints defense are coming back out in force.

“I feel like everybody’s overlooking us already. I feel like everybody feels like we’re going to come in, our heads down, not energized,” Garnder Johnson said. “We’re ready. If you’re not fired up after two losses, I don’t know what’s going to put a fire under your (bottom). But I know with me, there’s a little pep in my step. I know I've got to take it to another level.”

The Saints were able to get pressure up front on star Chiefs QB Patrick Mahomes, sacking him four times and causing him to lose a fumble in the fourth quarter. And although Mahomes produced in the clutch, his overall passing numbers were below his usual standard. Mahomes’ 55.3% completion rate was well off his rate of 67.3% for the season. Meanwhile, his 254 yards passing in New Orleans fell short of his season average of 318.

New Orleans will have to improve third down numbers on both sides of the ball over its latest outing. On offense, the Saints converted only one of 11 third downs while allowing the Chiefs to convert nine of 18.

Receiver Lil’Jordan Humphrey was activated because of the absence of Michael Thomas and stepped up with a leaping touchdown catch in the waning minutes that pulled the Saints within a field goal of Kansas City with more than 2:06 to go.

“He gives us some juice,” Brees said. “He can do a lot of things. He can play outside, play inside. He’s a pretty smart football player. He’s got good size, really good athletic ability ... good feel as a route runner and ability to go up and get the ball.”

Tight end Jared Cook was targeted five times by Brees but had just two catches for 29 yards at a time when the Saints were looking for receiving targets to step up in Thomas' absence.

Smith and safety Marcus Williams each left Sunday’s game with ankle injuries. Defensive end Trey Hendrickson, who leads the Saints in sacks with 12.5 sacks, appeared to have an upper body injury after his sack and strip of Mahomes in the fourth quarter.

212.5: The average of yards rushing allowed during the past two games by the Saints’ defense, which just three weeks ago ranked No. 1 in the NFL overall and second against the run. New Orleans has now fallen to fourth in the league against the run, allowing 95.6 yards per game.

The Saints play their final home game of the season on Christmas Day against Minnesota, when New Orleans will try to finally lock up the NFC South after failing to do so the previous two weeks.