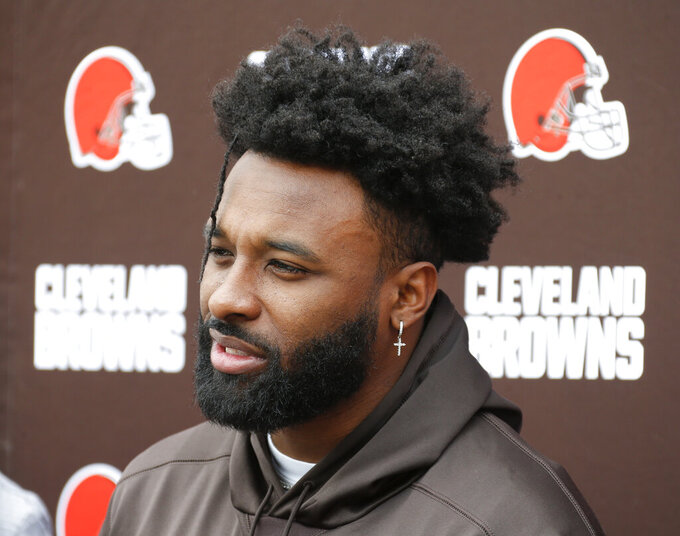 "It's a non-issue," Landry said while hosting his youth camp at Shaker Heights High School.

As Landry spoke, Browns owner Jimmy Haslam watched from high in the bleachers and general manager John Dorsey was on the field watching drills under gorgeous, blue skies and in cool, football-season-like temperatures.

Last week, Mayfield, who set the NFL rookie record for touchdown passes last season, was critical of Johnson, who demanded a trade and skipped Cleveland's voluntary workouts after learning Dorsey shopped him around after signing free agent Kareem Hunt.

Mayfield called Johnson's situation "self-inflicted" and stressed the back has "got to do his job" as long as he's with the Browns.

On Thursday, NFL Network, citing multiple sources, reported that several Browns players approached Mayfield in the locker room to voice their displeasure about his comments and any differences were "hashed out."

Landry dismissed the report and believes Mayfield and Johnson can still work together despite any differences.

"I don't think it would be difficult at all," Landry said. "It's a non-issue, and it's not one that we are feeling any particular way about. It's something that is being blown up from (the media) more than it really is."

The Browns are facing new scrutiny following a busy offseason in which they acquired star receiver Odell Beckham Jr., Landry's former LSU teammate and close friend. The Browns have become fashionable, and with that comes extra attention.

"That's a part of this story. That's a part of everything that we're trying to accomplish," said Landry, who had 81 catches for 976 yards and four TDs in his first season with Cleveland. "We're going to have to work through those things. The best way to tell the foundation of something is internally. If we stay strong and continue to trust each other, continue to build on our relationship, our chemistry, we'll be fine."